Putting the Brakes on Privatization 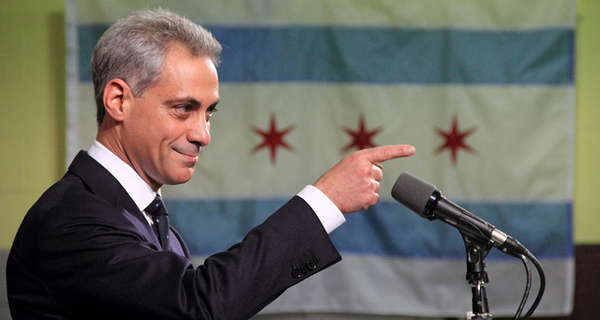 Although Mayor Emanuel claims that his privatization efforts have been more cost-effective for the city, Chicago residents and legislators are demanding more transparency. (Daniel X. O'Neil / Flickr / Creative Commons)

Chicago’s Better Government Association (BGA), a watchdog group that has fought waste, fraud and abuse in City Hall for the last eight decades, sent out a petition this week to supporters and city officials demanding a “full and fair hearing” from City Hall for a proposed city of Chicago law “that protects [Chicago] from bad privatization deals.”

In championing the law—titled the Privatization Transparency and Accountability Ordinance—BGA maintains that further privatization in the city risks losing jobs for public employees, which can, in turn, lead to weakened Chicago neighborhoods. “The rights of workers are synonymous with the rights of communities,” says Emily Miller, policy and government affairs coordinator for BGA. “Lost jobs mean a setback for communities.”

Alderman Roderick Sawyer, who proposed the ordinance, agrees. He asserts that his predominantly black South Side ward has seen former public employees lose their jobs and later have their homes foreclosed upon.

His ordinance could slow down Mayor Rahm Emanuel’s initiatives to privatize city services. Though the mayor has defended his efforts, such as competitive bidding for recycling services, as being more cost-effective for the city, citizens and public employees feel that they could compromise service quality and job security for supposed financial gain.

In general, Chicago residents are wary about privatization thanks in large part to the city’s 75-year lease of its parking meters in 2009 to a private conglomerate headed by Morgan Stanley. The deal hiked meter prices for motorists while robbing the city of steady revenue, as then-Mayor Richard Daley used the entirety of sale proceeds to balance the budget before he left office in 2011. As a result, Miller says, “Privatization is a dirty word in Chicago.”

Emanuel condemns the parking meter deal. But elsewhere, the current mayor has privatized primary health care clinics, water management services, family and support services, and some recycling pick-up. AFSMCE Council 31, the main union representing city workers, estimates that 250 of its members have lost their jobs from privatization during the Emanuel administration, a figure that includes the consolidation of the city’s mental health clinics.

And further layoffs could ensue if the city continues with its plan to privatize free mammogram services to uninsured women. Alice Johnson, executive director of the Illinois Nurses Association, said that her union has received notices from the Chicago Department of Public Health warning of possible layoffs and clinic closings.

In response, the Illinois Nurses Association has filed a grievance with the city to stop the potential layoffs. “Public health nursing is a specialty,” Johnson argues. “Public health nurses can provide the best care because they live in communities where the patients are from.”

Further details on breast cancer screening privatization may emerge next Wednesday, when Emanuel is scheduled to unveil his proposed 2014 budget.

Perhaps the biggest instance of privatization under Emanuel is the closing of 50 Chicago public schools this year even as CPS increased its number of contracts for charter schools, which are mostly staffed by non-union employees.

The school closings would not be considered direct privatization, as students and some staff from the closing schools mostly moved to other public schools. But 855 CPS teachers and staff were still laid off as a consequence of the shutdowns. Stacy Davis Gates, legislative coordinator of the Chicago Teachers Union, says that through privatization, the city is “further dividing already nominal resources.”

To increase transparency and expose the effects of privatization, Sawyer’s ordinance calls for public City Council hearings and a cost-effectiveness study on all city contracts worth more than $250,000. The ordinance also protects privately contracted workers by guaranteeing them wages and benefits equal to the public employees they are replacing. That measure is intended to either deter layoffs or prevent overall city wage levels from declining if the privatization in question nevertheless goes through.

The legislation also demands that 50 percent of all contract work “should be performed by bona fide city of Chicago residents.” Again, the hope is that even if privatization does still happen, the city will still have to provide decent wages to local workers.

In addition, the ordinance requires reporting on the progress of privatized programs. As of now, says Anders Lindall, public affairs director for AFSCME Council 31, “the public simply doesn’t know whether these [city] services—and service quality—[are] being maintained."

However, given Chicago’s strong-mayor system—among other powers, Emanuel dictates City Council leadership positions and has direct authority over the Chicago Public Schools—it could perhaps be impossible for the bill to become law without the support of Emanuel himself.

Elected aldermen could override a mayoral veto with two-thirds council support. But mayoral vetoes, and council veto overrides, are exceedingly rare: Council members are reluctant to publicly oppose the mayor by passing any legislation for which the mayor has not already indicated his support.

“The political reality is that until the mayor is on board, this thing isn’t going anywhere,” Miller contends.

According to Sawyer, the mayor’s office has said it does not support the legislation, but it “never [gives] any details about why they don’t like it—We’re more than happy to listen to suggestions.” Messages left with Emanuel’s press office were not returned at press time.

To overcome this potential hurdle, Sawyer sees two main strategies for advancing the bill. The plan for now, echoed by BGA's petition, is a public hearing, convened by the City Council’s Rules Committee, on the legislation. A hearing would presumably include testimony from Emanuel administration officials, pressuring the administration to either support a version of the ordinance or at least publicly explain their opposition.

“We’re basing a lot of activity around the ordinance right now,” Sawyer says. “A lot more pressure is being put on the rules committee and the [Emanuel] administration.”

But if Alderman Michelle Harris, whom Emanuel appointed as chairman of the Rules Committee this summer, declines to call a hearing, Sawyer could pursue a riskier strategy—“discharging” the bill from committee and bringing it to the council floor for a yes/no vote.

The ordinance does enjoy co-sponsorship from 32 out of 50 aldermen. Even so, the discharge strategy could backfire. Sawyer says that based on previous council history, a few of those aldermen will likely back out from defying the mayor. “A lot of people have signed on as co-sponsors,” Sawyer says. “But we need to figure out who actually supports it.”