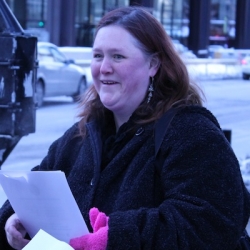 Kim Brown says that when she was laid off from her job in November 2011 doing customer service at an electric company in Chicago, she wasn’t too upset. “I thought this would be a chance for me to get a better job,” says Brown, who is in her late-40s and has a college degree in creative writing. “I was kind of trying to switch careers, maybe work for a non-profit or do political organizing.”

But Brown soon discovered that she was mired in a terrible labor market. She got a few call backs from employers in her first six months out of work, but then the calls stopped. She tried temp agencies, but staffing agents told her, “You’re going to be really hard for me to sell to companies because you haven’t worked in six months."

In September, Brown finally landed a job, albeit a $9.25-an-hour, 30-hours-a-week gig doing administrative work at the University of Chicago’s National Opinion Research Center. Brown, who does volunteer work at the Illinois chapter of Organizing for Action, President Barack Obama’s issue advocacy arm, says a friend she met at the Obama re-election campaign told her about the job.

Not everyone is so lucky. The number of long-term unemployed, who the federal government defines as workers out of a job for at least 27 weeks, is in decline. But there are still 3.6 million people that fall into this category, out of 10.2 million total people unemployed as of January 2014. That means that the percentage of the jobless who are long-term unemployed currently stands at 35.8—a rate much higher than in every prior recession, dating back to the Great Depression.

“The problem has gone on massively longer than any past recession,” says Chad Stone, chief economist for the liberal Center for Budget and Policy Priorities (CBPP) in Washington, D.C.  “Some of these workers’ skills have eroded.”

On Monday, Brown was one of a few-dozen advocates who braved yet another frigid winter day in Chicago and distributed fliers to passersby downtown, urging Congress—and particularly U.S. Sen. Mark Kirk (R-Ill.)—to extend emergency unemployment benefits. The advocates included those with the National Employment Law Project, a New York-based research and advocacy group, as well as reps from SEIU Healthcare Illinois and Obama’s Organizing for Action.

Emergency unemployment benefits for those who have been out of work more than 26 weeks expired Dec. 28 after time ran out on the last extension by Obama and Congress. Last Thursday, an Obama-backed U.S. Senate effort to extend benefits for three months just missed the 60-vote hurdle to end filibusters, with senators voting 59 – 41 to stop discussion on the matter.

A three-month extension was projected to cost $6.4 billion. But it would have brought benefits—typically about half of a laid-off workers’ former salary—to at least 1.7 million Americans, including 80,000 Illinois residents.

Illinois has the third worst unemployment rate of any state in the country. But Kirk, a self-styled moderate, did not join four other GOP Senators in voting yes on the extension. Though it is not clear when or if the Senate will again pursue the matter, Illinois labor advocates targeted Kirk Monday, plastering his face on fliers and bombarding his D.C. office with phone calls.

“Illinois in particular is in need of help for the long-term unemployed,” says Gregory Kelley, vice-president for SEIU Healthcare, explaining why Kirk is being targeted. “And in the past Kirk has demonstrated some willingness to be moderate,” he adds, citing the senator's support for last year’s comprehensive immigration overhaul that cleared the Senate in June.

Senator Kirk’s office did not return messages requesting comment left on Monday. Reciting a complaint common among GOP Senators voting against the extension, Kirk tweeted Thursday that, “I would have supported an unemployment benefits extension if the $6.4 b cost was paid for w/commonsense offsets instead of political gimmicks.”

The filibustered legislation offsets the $6.4 billion, but it does, as Kirk alludes to, rely on something of a budgetary gimmick: a reconfiguring of employers’ pension payments that results in higher employer federal income tax payments in the short run, but smaller tax revenues in later years.

Past bills extending unemployment benefits, however, were not quite as contingent on complex negotiations with Republicans, to become law.

As is historically common during recessions, President George W. Bush and Congress created an emergency unemployment compensation program in June 2008. The program provided federally-funded unemployment benefits for qualified workers out of a job for more than 26 weeks, who are classified by the federal government as the “long-term unemployed.”

Obama and Congress then extended the program several times due to the persistence of the unemployment crisis. According to an Urban Institute report from last year, the long-term jobless hit 45 percent multiple times in 2010 and 2011.

Another Urban Institute study also found that the long-term unemployed were often stigmatized by employers, and also often lost the social contacts needed to find work.

During her bout of long-term unemployment, Brown says that she was the victim of ageism. “When I was 21 it was much easier to get a job because employers assume they’ll have to pay you more now,” she says. The general sense of despair among job-seekers didn’t help, either. “They know that people are desperate and they are taking advantage of it,” Brown alleges of employers she has dealt with.

The CBPP’s Stone says that extending benefits is really the only clear way to help the long-term unemployed, as any other federal program will cost money and so also face GOP resistance.

“There’s really not an easy substitute to it,” Stone says. “There are no quick options.”