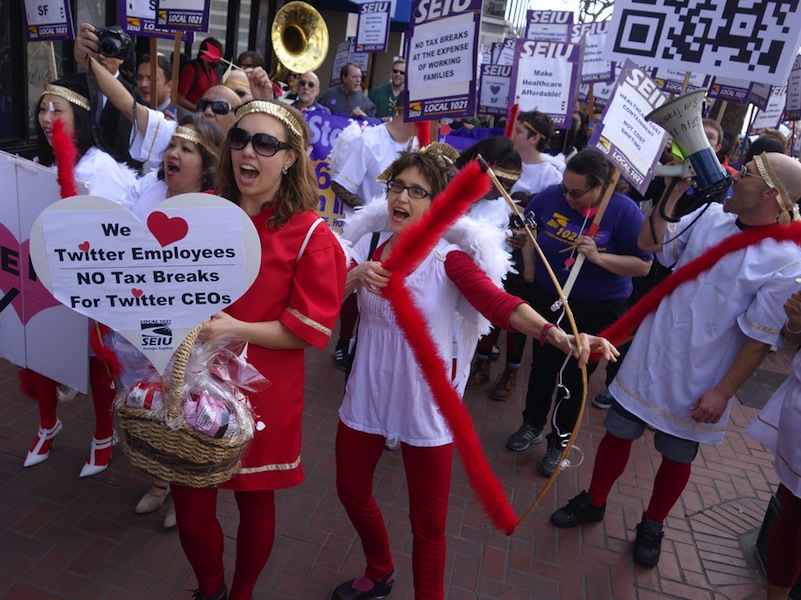 Last Wednesday, more than 400 San Francisco city employees—many dressed as Cupid with wings and golden headdresses—marched from the city’s Department of Human Resources to Twitter headquarters a few blocks away. The protesters were members of Service Employees International Union Local 1021, which is currently negotiating with the city over contracts covering more than 13,000 workers. As the workers chanted, “Twitter, you’re no good. Pay your taxes like you should,” they left a Valentine of sorts on the company’s doorstep at Ninth and Market streets.

“We, the undersigned, the workers and residents of San Francisco, ask that Twitter and other corporations do the right thing and end their tax breaks and sweetheart deals,” read the protesters’ card.

Like the private buses that transport tech workers from San Francisco to corporate campuses in Silicon Valley, Twitter’s headquarters have become a symbol of gentrification and displacement for housing activists and community organizations in the city. On Nov. 7, 2013—the same day the company held its Initial Public Offering on the New York Stock Exchange—local groups held a #ThrownOutByTwitter day of protest in downtown San Francisco to draw attention to what they see as the tech industry’s contribution to the city’s growing class divide. San Francisco should be trying to advocate for all its residents, activists feel—not just the ones with startup funding.

Now, the SEIU, the largest public sector union in San Francisco, is taking renewed aim at Twitter over the major tax break it received from City Hall in 2011.

At the time, the corporation—which employs thousands of workers, many of them city residents—was threatening to leave San Francisco for the suburbs in order to avoid paying the city’s payroll tax. Faced with the prospect of losing a major employer, the city agreed to establish a six-year payroll tax exclusion area around Twitter’s offices in the Central Market/Tenderloin neighborhood. In the three years since, the so-called “Twitter tax break” has drawn numerous tech companies to the area, though Twitter is by far the largest beneficiary. According to an analysis by the San Francisco Chronicle, San Francisco will lose $56 million on Twitter alone over the six-year life of the tax break—far above the city’s original estimate of $22 million.

That’s a figure that doesn’t sit well with city workers, who have accepted concessions in their past two contracts due to the recession. This fiscal year, the city is facing a $69 million projected budget deficit, a shortfall that SEIU claims would disappear if the city would stop making what the union calls “sweetheart deals” with tech companies. According to union officials, the tax breaks for the Central Market tech companies could total tens of millions of dollars this year. Add to that the $6 million tax break the nearby Zynga received in 2011 and the $500 million in fines San Francisco chose not to levy against Silicon Valley companies whose private shuttles illegally use public bus stops, and the frustration felt by workers like Larry Bradshaw, a paramedic and vice president of Local 1021, begins to become more clear.

“If we made the tech corporations that are not paying their taxes pay their taxes, we would have more money in the city budget and we could rebuild the social safety net that we’ve seen being eroded for the last four or five years,” Bradshaw said in an interview with Truthout Wednesday. “Twitter is emblematic of the whole problem with giving tax breaks to these large corporations. The other corporations are on our target list as well, but we’re starting with Twitter today.”

But Susan Gard, spokesperson for the city’s Department of Human Resources, which is responsible for bargaining with SEIU 1021, says in an email to In These Times, "I don't think you can say negotiations will be impacted by Twitter (or any other) tax breaks." Despite the budget deficit, Gard maintains the city is in a much better financial situation this year, in part due to concessions from SEIU 1021 and other labor organizations in past contracts.

Though the state of the city's finances will be a part of the discussion, “we’re not trying to balance the budget at the negotiation table,” she says. She claims the city will not be seeking economic concessions; instead, its focus will be on “streamlining work rules.”

City workers, however, are not convinced. Karen Joubert, a 17-year city employee and vice president of representation with the union, says in recent contracts, workers made the difficult decision to accept furloughs, increased contributions to pensions, wage freezes and layoffs. Hundreds of workers were also temporarily reassigned to classifications with lower rates of pay. This time around, now that negotiations have started again, Joubert says, “We’re really concerned about healthcare.” Although no proposal has been made yet, Joubert and the union believe the city wants to increase the cost of coverage for employees with families.

And for workers like Bradshaw and Joubert, the privilege gap in San Francisco doesn’t end with tax breaks. Bradshaw also points to the cost of living increase that has accompanied the tech boom. “City workers have fallen behind since the Great Recession. Our wages have not kept up with the cost of living, and with the arrival of big tech in San Francisco, many of our members are unable to afford to live in the city. Every year, more and more of our members are being forced to leave the city they love,” he told Truthout. Twitter did not respond to requests for comment.

The Twitter action was just the latest of SEIU 1021’s efforts to fight what union members see as tech’s gentrifying effects on their hometown. In December, the local organized a protest at the downtown headquarters of Salesforce, where Mayor Ed Lee was holding an invitation-only meeting with tech CEOs. Workers felt the meeting itself was indicative of major companies’ special access to the city’s higher-ups.

And the union isn’t going to stop the fight anytime soon. “As a public sector union and progressive stakeholder, 1021 is really positioned well to be at the forefront of this issue,” Chris Daly, the local’s political director and a former member of San Francisco’s Board of Supervisors, tells In These Times.

According to Daly, SEIU 1021 also plans to support an anti-speculation tax aimed at minimizing the predatory practice of buying real estate in the hopes of reselling soon thereafter at a higher price, which housing activists blame for the rash of evictions San Francisco has seen over the past few years. In addition, the local says it’s readying a legal challenge to the deal reached by tech companies and the San Francisco Municipal Transportation Agency to charge tech shuttles just $1 per stop for the use of public bus stops, which opponents say harms the city’s environment and has a discriminatory impact on low-income communities.

Another idea local officials are discussing with SEIU International leaders is investing the 1021's reserves in community land trusts to create affordable housing in San Francisco or Oakland. The concept may sound radical, but it has a long history in San Francisco, where the International Longshore and Warehouse Union built a cooperative housing project for low-income workers in 1963.

San Francisco’s affordability crisis is also of increasing concern to many of San Francisco’s other labor unions, which are seeing growing numbers of members pushed out of the city by out-of-control housing costs and rampant evictions. In turn, they say, workers do not have the time or resources to stand up for their rights.

Mike Casey, the president of UNITE HERE Local 2, the hotel and restaurant workers’ union in San Francisco, has been voicing concerns about the impacts of gentrification and displacement on the “politics of protest” for at least a year. Earlier this month, at a grassroots tenant convention organized by the San Francisco Anti-Displacement Coalition, Casey warned, “When our workers have to travel an hour and a half to get home, they can’t afford to come back and be on the streets.”

With displacement threatening the political power of unions and the diversity of the city, SEIU 1021’s current struggle goes beyond a simple contract battle. On the same day as the tenant convention, labor and community coalition Jobs With Justice organized a special meeting of union members. About sixty staffers, elected leaders, and rank-and-file members from various locals gathered to discuss the effects of the housing crisis on their memberships and strategize about ways labor can fight to maintain San Francisco’s status as a “union town.”

As one union member at the meeting put it, “If we don’t fight now, in two years, none of us will be here.”