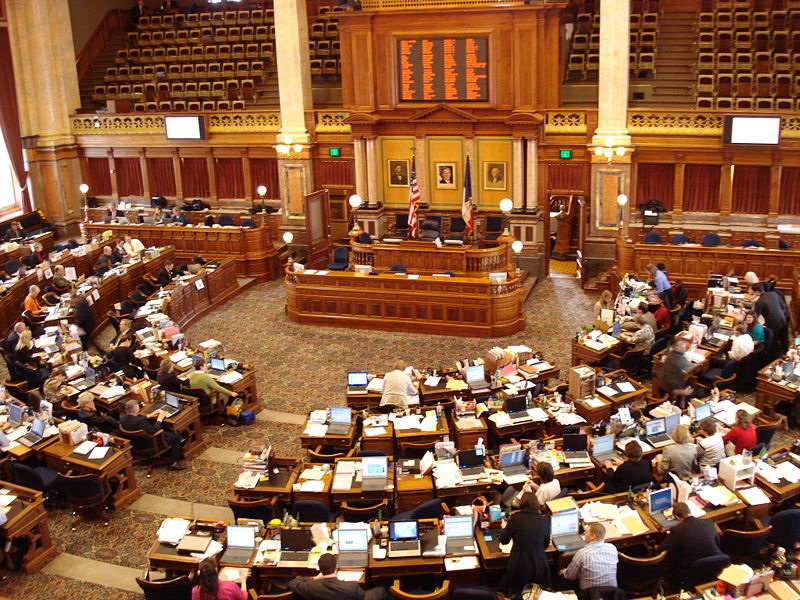 The wage-theft bill is likely to die in Iowa’s Republican-controlled House. (Wikimedia Commons)

In the face of opposition from Iowa’s business lobby, a bill that seeks to protect workers in the state against wage theft is on the verge of failing. Approved by Iowa’s Democratic-controlled Senate last week, the bill would require employers to tell their workers in writing exactly how—and how much—they will be paid for their work.

The sponsors of the proposed law argue that this would not only clarify work arrangements in order to make it harder for bosses to trick employees, but would also establish a paper trail that would help the state’s skeleton staff of wage-theft investigators better determine when a person’s pay has been unlawfully withheld.

The bill is now in the hands of Iowa’s Republican-controlled House of Representatives, where it is almost sure to fail. It's currently in the House Labor Committee, whose chair, Iowa House Republican Greg Forristall, received endorsements and campaign money from the Iowa Association of Business and Industry (ABI), which opposes the bill. Forristall told the Associated Press that the subcommittee will likely not meet again this session, meaning the bill has little chance of finding its way to a final vote.

Workers in the state lose $600 million in wages each year to employer theft, according to a 2012 analysis by the liberal-leaning Iowa Policy Project. Last February, In These Times reported that the state’s wage-and-hour enforcement capabilities had been weakened to the point that the state had only a single, overburdened investigator covering the entire state and scrambling to resolve up to 1,000 cases annually.

Faced with pervasive wage theft and underfunded enforcement departments, Iowa and other states across the country have sought to create protections for workers such as higher wage-theft fines and pay documentation equirements that won't stretch state budgets. Such proposals have met resistance from organizations that lobby for commercial interests, such as ABI.

“The bill paints everyone with a broad brush; it presumes that people are guilty until proven innocent,” says Mike Ralston, president of ABI. “We offered some amendments that would make it more specific to going after bad actors, and if those amendments get adopted we’ll strongly support the bill.”

But a list of proposed amendments to the wage theft-bill that ABI provided In These Times goes farther than specifying bad actors. “Strike all and replace” is ABI’s first suggestion. Instead of the current text, the industry proposes a wage-theft task force composed of four business representatives, one labor representative, government officials and two members of the public.

The bill’s sponsor, state Sen. Bill Dotzler, argues that requiring employers to formalize their work arrangements in writing is far from radical. “This bill is basic common sense—these are things that any company with a good personnel department already does,” Dotzler said. “To say that this will create some big burden on industry is simply not the truth.”

In many ways, the standoff echoes a 2011 fight in Iowa over a previous wage-theft bill. Democratic state senators proposed increasing employers’ responsibility for providing documentation to wage-theft investigators, effectively shifting the burden of proof from workers onto employers. Once a worker filed a wage-theft claim, it would be the employer’s responsibility to prove the worker had been fairly paid. That bill also faced opposition from the ABI, which argued that it would burden employers, and also died in committee in Iowa’s Republican-controlled House.

When asked if ABI has any concrete suggestions on how to improve protections for victims of wage theft, Ralston responded that it opposes wage theft and that it “supports strongly enforcing the law against wage theft and giving Iowa Workforce Development all the tools it needs to do so.” Ralston tells In These Times that the ABI would consider supporting increased funding for the state labor agency’s enforcement team.

In addition to requiring employers to document pay, Dotzler’s bill also stipulates that, if found at fault in a wage-theft case, employers must reimburse workers’ attorneys’ fees. It also requires employers to notify an employee by writing in advance of any paycheck deductions. Ralston particularly objects to a provision that presumes that action taken against an employee within 90 days of a wage-theft complaint is retaliation, a charge the accused employer then must prove itself innocent of.

Vanessa C. Marcano, a community organizer at the Iowa Citizens for Community Improvement (ICCI) worker center in Des Moines, says that employers in Iowa that continually underpay employees are getting away with it. “There is not a week that goes by that we don’t hear of at least one or two wage theft cases in the Des Moines metro alone,” Marcano says. She says that rather than relying on the overworked wage-and-hour department, her group has had to resort to taking “direct action,” such as confronting noncompliant employers in person to retrieve a worker’s pay.

Worker advocates and wage-and-hour officials told In These Times that those most at risk of being underpaid in the state include truckers and immigrants performing temp work.

“Here in Iowa, they want to get to a point that employers can do anything they want to their employees without repercussion,” Sen. Dotzler says. “Already, it’s terrible what these employers are getting away with.”