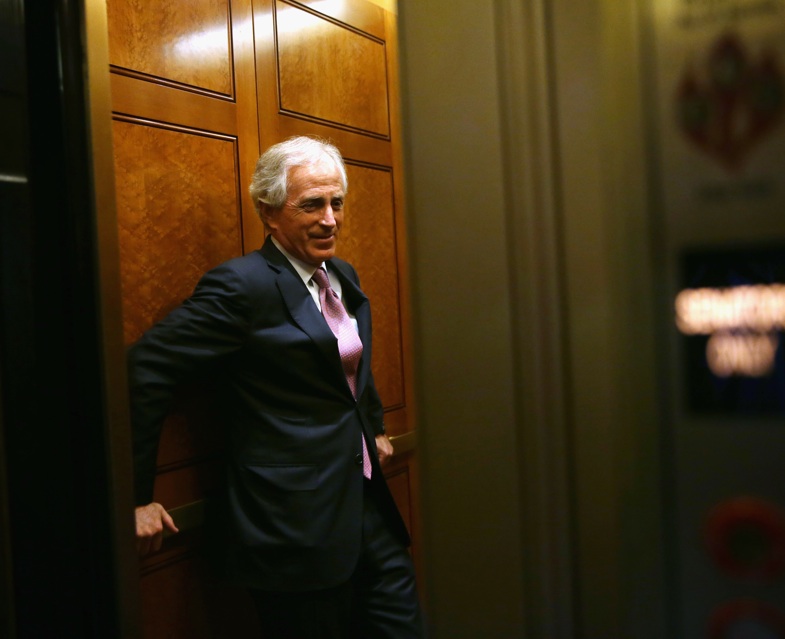 U.S. Sen. Bob Corker (R-Tenn.) has been accused by the UAW in an NLRB complaint of interfering with the union election at the Volkswagen Chattanooga plant. If the UAW wins, a new election will be held. (Alex Wong / Getty Images)

Sen. Corker and Gov. Haslam have been blamed by the union for contributing to the drive’s defeat by making public statements against the UAW. Prior to the election, Corker claimed that the plant would add an additional SUV assembly line if workers voted against the union, while Haslam implied that businesses had told him that they might not relocate to Tennessee if workers at Volkswagen voted to join the UAW.

There was no direct evidence, however, that these politicians were coordinating with the various anti-union forces that had gathered in Chattanooga to oppose the drive, although In These Times reported in November 2013 that Washington, D.C.-based anti-union campaigner Matt Patterson had bragged about developing anti-UAW messaging with “politician [sic] and businessmen” in Tennessee. The documents by NewsChannel 5 provide the first direct proof of such coordination. In addition, In These Times magazine has obtained documents and conducted interviews with a top anti-union consultant that shed new light on the origins of the anti-union videos referenced in the communications.

The documents released by NewsChannel 5 show that, just before the union election, Sen. Corker’s chief of staff and one of Gov. Haslam’s cabinet members were part of an email chain with both Chattanooga-based and national anti-union consultants about efforts to draw attention to three videos produced to fight the UAW at Volkswagen. The videos feature testimonials from workers at previous UAW plants claiming that the UAW destroyed Detroit and led to the closure of a former Volkswagen auto plant in Westmoreland County, Pa. (Full disclosure: This author’s mother worked at the Westmoreland County Volkswagen plant until it closed, and was a member of UAW.)

In a February 10 email with the subject line “Video views so far today,” Peter List, the CEO of the anti-union labor-relations consultant group Kulture LLC and editor and chief blogger of LaborUnionReport.com, boasted of the videos’ web traffic. The email was addressed to, among others, Sen. Corker’s chief of staff, Tony Womack; Maury Nicely, the head of the local Chattanooga anti-union group Southern Momentum; Charleston, S.C.-based anti-union consultant Jim Gray; and former Volkswagen plant manager Don Jackson, whose role in campaigning against the UAW has been previously detailed by In These Times. Also on the chain was Tim Spires, president and CEO of the Chattanooga Regional Manufacturers’ Association, which promoted anti-UAW events, and Ron Harr, president and  CEO of the Chattanooga Area Chamber of Commerce.

The next day, Corker’s Chief of Staff Todd Womack forwarded List’s email to Tennessee economic and community development commissioner Bill Hagerty—a member of Gov. Haslam’s cabinet—and Hagerty’s chief of staff Will Alexander (who is the son of U.S. Sen. Lamar Alexander) with a message saying “If you would, please don’t forward this version, but this is the video I mentioned. Thanks much, Todd.”

Womack did not return request for comment about what level of coordination Senator Corker’s office had with anti-union consultants. Likewise, Peter List refused to answer questions about why he was emailing Senator Corker’s staff, stating in an email to In These Times, “It seems you've fallen into the trap that people actually pay attention to what politicians say.”

The other major revelation of the NewsChannel 5 investigation is a document titled “Project Trinity,” dated August 23, 2013 and labeled “confidential,” in which Haslam offered $300 million in incentives to Volkswagen if the company would bring a new SUV line to its Chattanooga plant and add 1,350 jobs. At the time, the UAW and Volkswagen were discussing the process by which the company would recognize the union and how the UAW would interact with a potential German-style works council being at the plant. In the “Project Trinity” document, Haslam’s office informed Volkswagen that the "the incentives … are subject to works council discussions between the State of Tennessee and VW being concluded to the satisfaction of the State of Tennessee."

In remarks in Chattanooga today, Haslam denied that he was attempting to use the incentives to influence the union vote. However, the emails show that top Haslam staffers conducted an extensive legal analysis of how quickly the union election could occur at Volkswagen once either the union or the employer filed for it. (Unions tend to advocate quick elections, since they believe that delaying organizing drives deflates their momentum.) In a February 4 letter to the Volkswagen Group of America Chattanooga Operations CEO Frank Fisher, Haslam also voiced concerns about union organizers being granted access to the plant.

Who's behind the videos?

Through an interview with prominent “union avoidance” consultant Jim Gray and a leaked document from an anti-union consulting group, In These Times has learned the source of the videos discussed in the email chain. Gray, who was sent the email, tells In These Times that he played a large role in developing the videos, in conjunction with Southern Momentum, whose head, Maury Nicely, was also on the email chain. Gray says that he helped write the script for the video and “helped point towards” Projections Inc., a prominent anti-union consulting group, as a possible producer.

A document from Projections’ UnionProof.com website titled “Case Study: Volkswagen and the UAW” that is available to the site’s “insider members” reads, “On February 3, the call came in to Projections’ Union Proof Team from the Southern Momentum non-profit group. … When Volkswagen asked for a fast vote on February 3, the Union proof Team immediately went to Chattanooga to begin drafting a communications strategy. Scripts were written, testimonials shot, and in plant footage was recorded.”

Projections states that it in a matter of four days, it was able to produce three “highly professional” videos against the UAW and even traveled to Westmoreland County, Pa., to film a former Volkswagen worker who claimed that the UAW forced the plant there to close in 1988.

The videos were then made public at meetings organized by Southern Momentum on February 8 and 9, just a few days before the February 12-14 union election, and uploaded to www.no2uaw.com, a website run by anti-UAW workers at the plant.

The Case Study document quotes Projections CEO Walter Orechwa as saying, “The truth is, regardless of the timeframe, powerful employee communication is always key to remaining union-free.”

After the union defeat, the UAW filed a case with the National Labor Relations Board charging that outside political interference by Corker and the state GOP leadership prevented workers from receiving a fair election. On Tuesday, the UAW used the NewsChannel 5 report to file a supplemental brief with the NLRB, alleging that the leaked documents provide even greater evidence that government officials coordinated their efforts to hinder the union drive. “Doubtless there is more evidence of such coordination in addition to this particular leaked email chain, given the tone of familiarity among the email recipients,” wrote the UAW in the brief.

According to labor lawyer Moshe Marvit, a fellow at the Century Foundation, the case has far-reaching legal implications, since outside groups with dark money sources are rarely allowed to fight unions in NLRB cases.

However, Marvit notes that “there is an irony to the Board's granting intervenor status to outside groups” because “the hearing is only necessary because outside groups became involved in the election in an improper way. Now, the Board is affirming that these groups have a legal interest in the proceedings, and is thereby affirming their position as parties.”

The NLRB trial is set for April 21 in Chattanooga, Tenn. While it’s unclear whether the NLRB will be swayed by the new evidence to call for a do-over election at Volkswagen, to one local activist these documents represent something startling.

"When a billionaire governor, a millionaire senator, and the local Chamber of Commerce all unite to kill jobs in reaction to the mere possibility of one union local being organized at one factory in one city in the state of Tennessee, the full extent of the corrupting influence of the business community in our state government becomes clearly visible,” says Chris Brooks, an activist with the pro-UAW community group Chattanooga for Workers.  “What chance do workers have to organize a union when they are pitted against our state's most powerful politicians who coordinate their attacks in secret with a shadowy corporate cartel composed of everyone from the local Chamber to out-of-state anti-union consultants?"

Full disclosure: The UAW is a website sponsor of In These Times. Sponsors have no role in editorial content.