Steve Early on Labor Reporting: ‘Unions Can Be Thin-Skinned About Criticism’ 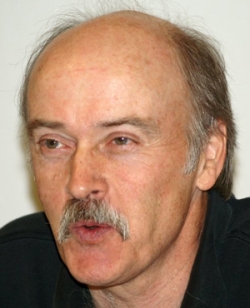 Since the 1970s, Steve Early has produced more than 300 pieces of labor journalism for publications as varied as the New York Times, The Boston Globe, The Nation, LaborNotes and In These Times. Throughout his career, Early has covered stories of dysfunction and corruption within unions that many labor reporters are afraid to touch out of fear of upsetting high-level union sources.

At time when the labor beat was disappearing from mainstream publications, Early’s writing formed a valuable body of work that inspired many young writers—myself included—to stick with the profession through its highs and lows.

Early sat down with me to discuss his new book, Save Our Unions: Dispatches From a Movement in Distress, out this spring from Monthly Review Press.

Steve, though you’ve written for decades, you also worked as a union organizer with the Communications Workers of America (CWA) for 27 years. During that overlap, you’d sometimes publish your work under a pseudonym—why is that?

Well, as you know Mike, American unions can be a little thin-skinned about criticism. Sometimes, when I would be writing what were always essentially pro-labor, pro-worker pieces, I would find fault with other unions or the AFL-CIO. I’d address things that they were doing that they shouldn’t be doing or things they weren’t doing that they should’ve been doing.

In response, sometimes officials of those other organizations would contact CWA and complain, which would lead to my employer threatening me with disciplinary action. During periods when the heat was on, so to speak, I resorted to that well-known technique for staying employed—and in some countries, staying alive: I’d use a pen name.

What were the pseudonyms you used? And in which publications did you use them?

Well, some of the pieces I did for The Nation about the Teamsters in the 1980s and early ’90s were under pen names, as were a few for The Globe and some other left and labor publications, including Labor Notes. I tended to draw inspiration from some of my own personal labor heroes and heroines, using some variation of the names James Connolly and Jim Larkin—both of whom were famous Irish labor leaders—and Farrel Dobbs, who was a leader in the Teamsters Minneapolis General Strike in 1934. So the names were recognizable, though the author, fortunately, was not always.

You know, I heard a story once that Morty Bahr, the former president of CWA, said that he would have fired you if you weren’t such a good organizer. Do you think critics make good organizers because they’re willing to honestly evaluate themselves and their institutions?

Well, I mean, a union is hiring an organizer to organize, not to be a critic of the labor movement. So it’s no surprise that if a colleague of Brother Bahr’s from any other union called up with a complaint that a CWA staff member was writing something controversial, he was under executive pressure to respond.

My particular form of participatory labor journalism was something that I think I was able to pursue to a far greater degree than I would have been able to on the payroll of just about any other union. Even though there were some conflicts along the way, I think other unions would’ve clamped down much more harshly and imposed a strict ban on my speaking or writing under my own name, on my own time.

We know that the culture of unions varies quite a bit, and that some are more open to internal discussion. In my view, that should come from the members themselves: the elected local leaders, union convention delegates and activists. That’s where we need to have pro-and-con debate about tactics, strategy and the direction of the unions. I mean it’s great for journalists, labor academics and other people on the Left to write and talk about these things, but the real movers and shakers in any struggle to transform the labor movement are the working members.

What do you see as the biggest challenge journalists face when trying to write about how dysfunctional some of these organizations really are?

Well, I don’t think union dysfunction is always the main story. I mean, we have to keep the many external attacks in perspective, too. However, there’s an unfortunate synergy sometimes between poor internal union functioning and its ability to defend workers’ interests from employers, right-wing politicians, or so-called labor allies in the Democratic party who have been known, in recent years, to turn on their union supporters, particularly in fields like public education.

I think that some people today, especially some labor academics, think that demanding union reforms is passé, or that it’s a luxury that labor can’t afford. They say, “Today, we’re in a defensive posture, a struggle for survival, we have to circle the wagons, and everyone has to basically zip it and follow orders.”

Well, that’s not what’s happening around the country. Take, for example, local affiliates of the American Confederation of Teachers or the National Education Association. In big-city or even statewide affiliates of these national unions, the teachers are in revolt against the failings of elected union leaders who sought to accommodate the corporate-backed reformers trying to destroy their unions and undermine public education. From Massachusetts to Los Angeles, with Chicago in between leading the way, teacher union reformers are getting elected, taking over locals, and steering their organizations in a different direction.

What do you see as the big stories right now happening in organized labor? What do you think isn’t being covered in the mainstream media?

One of the big stories is the attack on public school teachers I just mentioned. I mean, with the combined membership of the AFT and the NEA, there are 3 million union members who are on the front lines of the attack on all of organized labor. Their jobs, their contracts, and their past bargaining gains are inextricably tied up with a hopefully successful defense of public education in this country.

In response, the Chicago teachers have shown a tremendous potential for doing outreach in the community and enlisting allies—students, parents and anyone in any community who wants to see public education improved in this country. That improvement isn’t gonna happen through privatization, charter schools and standardized testing.

So I think in that arena in particular, the lessons of past union democracy struggles in the Teamsters, the Steelworkers and the Mine Workers are still quite relevant.

Do you think organized labor might fear broader coverage from independent writers?

Again, there’s this belief that when your wing’s under attack, you can’t permit any kind of dissent, discussion or disagreement that you think could weaken rather than strengthen the ranks of labor.

Look at unions’ own official publications. They’re generally party-line organs; many of them don’t publish letters to the editor; they often don’t have pro-and-con exchanges about controversial issues. Most union papers don’t even have election battle pages, in which opposition candidates could present their campaign platform on an equal footing with the incumbents.

So in a lot of ways, union publications, when they still exist, are not that interesting. They’re not that widely read, and they don’t have a lot of credibility, even among the members whose dues money pays for their publication and distribution.

I think we could restore the credibility of the labor press by opening it up a little bit to other voices and points of view. Then, I think you would once again have more members eager to read their own union newspaper’s versions of events, and they’d be more receptive to some of those messages.

Do you feel unions could do something to boost labor coverage in general?

The traditional labor beat has contracted. You’re lucky if mainstream newspapers have somebody on the business assigned to cover labor relations issues; now and then, there are a very few specialists. And so there’s a tremendous void to be filled. To a certain extent, the younger labor writers who primarily work for web-based publications these days are filling that void, but unions are not doing what they should to support independent labor investigative writing and reporting.

In every major election cycle, unions spend hundreds of millions of dollars on political candidates—many of whom are undeserving. If a fraction of that money were put into projects like Working In These Times, Workers Independent News, or other pro-labor media outlets, and into developing new ones, labor’s messages would be communicated a hell of a lot more effectively than they are today through press releases and other communications initiatives made by the unions themselves. They need to cultivate and support a broader layer of pro-labor writers who want to see the movement grow, not continue to decline.

Early will be appearing at Busboys and Poets at 14 & V in Washington, D.C. on June 2 for a discussion of his book.

Full disclosure: The CWA is a sponsor of In These Times. Sponsors have no role in editorial content. In addition, the In These Times staff, including this author, are members of the Newspaper Guild - CWA.