Actor: ‘The Roles Get Fewer and Farther Between’ 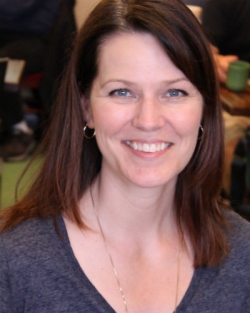 Loretta Rezos says that while she does feel as if her career has been a success, she wonders sometimes whether she'll still be working as an actor in 20 years. (Matthew Blake)

For three years in the early 1970s, journalist Studs Terkel gathered stories from a variety of American workers. He then compiled them into Working, an oral-history collection that went on to become a classic. Four decades after its publication, Working is more relevant than ever. Terkel, who regularly contributed to In These Times, once wrote, “I know the good fight—the fight for democracy, for civil rights, for the rights of workers has a future, for these values will live on in the pages of In These Times.” In honor of that sentiment and of Working's 40th anniversary, ITT writers have invited a broad range of American workers to describe what they do, in their own words. More "Working at 40" stories can be found here.

In the ’60s, Terkel interviewed Arny Freeman, who became so well-known for appearing on commercials that strangers would ask him for autographs on the street. He told Terkel, “I’m a working actor. If you want to work, you have to do everything.”

Similarly, Loretta Rezos, a Chicago-based actor, has juggled a combination of theater, commercial and voiceover roles since matriculating at DePaul University in 1994. Rezos isn’t famous, but neither is she struggling. In These Times spoke with her in May at a Chicago coffee shop about her career. This interview has been edited and abridged.

I’m a freelance actor. I do voiceover work for commercials and industrials, which are in-house videos for companies. The general public doesn’t get to see those.

I’m covered by the actors’ union, the Screen Actors Guild American Federation of Television and Radio Artists, or SAG AFTRA for short. So all the work I do for commercials—anything that’s on camera or voiceover—is covered by the union, which ensures that I get standard wages, pension and healthcare for the work that I do.

I have an agent who sets up the auditions for me. Most of the time, I go into a sound booth and say copy for 30 minutes to two hours, depending on the needs of the project. I sometimes do on-camera work as well, which requires the same sort of commitment, though producing ads typically takes longer than voiceovers. Voiceover and on-camera jobs pay more than theater these days, unfortunately. I do the commercial work so I can do the more artistic projects, too.

What kind of commercials have you done?

There’s a Choice hotels commercial that has been running. I am in it for 15 seconds. I am with my commercial husband at a laptop looking up at hotel fares. The whole commercial is about everybody being happy about getting these low rates. So we’re in our kitchen looking at our laptop, and we both lean in and kiss the computer screen at the same time.

I would say that wasn’t more than a two or three hour shoot. It was filmed in Chicago, in one of the studio buildings downtown.

Commercials are weird, but they can be really fun. They can become repetitive, though. I did a vacuum commercial where half of it consisted of what the mess on the floor looked like, so my foot had to stay in the shot while art directors and other people fixed the lighting and worried that the pile didn’t look good enough.

How did you first succeed in picking up roles?

Back in the day, you had to get headshots and requests for auditions copied and mailed, and printers weren’t as readily available. And that could be kind of tedious. But it was also a way to feel like you had some control over your career—like you were doing something tangible, mailing those materials off.

And just a lot of networking: Going to opening nights for shows and meeting other people in the industry. Before social media it was really important to do that, otherwise people might forget about you. Now it’s different. I don’t have a web page—and I know that’s something I need to do—but I am on my agent’s web page, and they have voiceover demos on that as well as my headshots and résumé.

Typically, I do voiceover auditions almost every day. I do those from home, using a “snowball” 3-D microphone and a laptop. My agent e-mails me the auditions and then I record them and e-mail them back. It’s rare that I’ll go a whole week without recording anything.

I often only get 24 hours’ notice before a job.  And week-to-week, it changes a lot, which is why having a day job can be pretty tricky. For a long time, I had an office job downtown, and they were okay with me leaving for an hour to record once in a while. Finally, though, I got to a point where I was doing more voiceover work, and it was actually interfering with my day job.

As far as theater, that is definitely scheduled more in advance. I just finished an understudy job at the Steppenwolf, which I think I auditioned for in August 2013. It didn’t start until January. And those schedules are pretty regular. You know you’ll be rehearsing between six and ten at night, Monday through Thursday.

Are you concerned that as you grow older you will no longer land acting roles?

It depends. I’m in my early 40s, and the things I go in for are a lot of “Mom” kinds of roles these days. I’m not going to go in to play a 25-year-old anymore, but you know, you grow out of those roles anyway. Certainly, I do wonder whether I’ll still be doing this in 20 years. Being an actor does take a lot of energy, and the roles get fewer and father between.

Do you think your career has been a success?

I think I’ve had a modicum of success. I certainly would like to be more successful but I think that has to do more with having more power and clout to pick your own project. I’d certainly like that more, but I think I’m pretty successful.

All I have control over is my work ethic: how well I work and how well I get along with other people. I can’t control whether someone’s going to give me a job or turn me down for one because I look a certain way, or for some other random factor—like whether somebody’s cousin is going to get the job instead.

It’s a job, but you do have to love doing it or you’re not going to do it. There are too many adverse conditions for it to be worth doing if you don't like it.