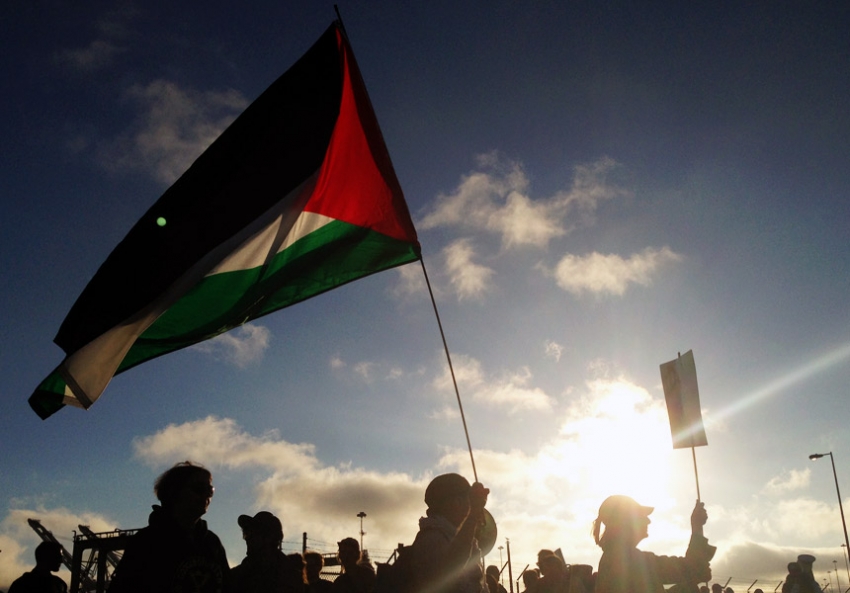 Activists hoist the Palestinian flag as they move to prevent International Longshore and Warehouse Union workers from unloading an Israeli ship in the Port of Oakland. (Julia Wong)

In response to the recent war between Israel and Gaza, the Palestine General Federation of Trade Unions has issued a call urging American labor unions “to condemn the Israeli aggression and to boycott Israel through various means.” In the Bay Area, that condemnation has emerged in the form of “Block the Boat,” a campaign to stop the unloading of an Israeli-owned Zim Integrated Shipping Services vessel in the Port of Oakland.

This weekend, thousands of protesters massed in Oakland to prevent members of the International Longshore and Warehouse Union (ILWU) Local 10 from emptying the ship, effectively uniting the community in support of the international Boycott, Divest from, and Sanction Israel campaign, known as BDS. As of Monday evening, the boat had still not managed to successfully deposit its cargo.

On Saturday afternoon, more than 1,000 protesters gathered at the West Oakland Bay Area Rapid Transit (BART) station before marching about 1.5 miles to the Port of Oakland, where they planned to erect a picket line. Midway through the journey, however, organizers announced that they had received word the ship would not dock for the rest of the day.

“On August 16, 2014,” Sameh Ayesh of the San Francisco-headquartered Arab Youth Association (AYO) cried over a loudspeaker, “we have stopped the ZIM Line from docking in the United States.”

The protesters continued to the Port anyway, where they held a victory rally upon arrival. Clarence Thomas, a member of ILWU Local 10 who was supportive of the blockade, addressed the crowd.

“I want everyone to know an injury to one is an injury to all,” he said, invoking the ILWU’s historic slogan.

"What you’ve done here will reverberate around the world,” he continued. “This action needs to be duplicated at other ports around the country.”

Although there was backing from some rank-and-file members of the ILWU Local 10 for the action, including Thomas, the union itself did not take an official position. Organizers proceeded with the action in the hopes that union members would honor the community picket line and decline to work their shift.

Local 10 is currently in negotiations for a new contract, its last one having expired July 1. According to Roy San Filippo, a spokesperson for the ILWU, Local 10’s executive board does not accept outside speakers during contract negotiations, preventing it from formal consideration of an endorsement.

ILWU Local 10 has a long history of undertaking international solidarity actions, such as the union’s refusal to load bomb parts intended for the military dictatorship of Chile in 1978 and a 10-day 1984 strike against South African goods in protest of apartheid.

Because of this, community activists often assume that even without explicit endorsement from the ILWU, union members will not cross the picket line.

"Usually if a picket line is big enough, strong enough, and powerful enough, the ILWU will respect that,” says Peter Olney, the former Organizing Director of the ILWU. Olney is now retired, and does not speak for the union.

Indeed, Local 10 has a contract provision that allows for a shift to be cancelled to protect the health and safety of its members if a picket line is in place at the Port. (The union points to a demonstration in 2005 when ILWU members were struck by rubber bullets fired by Oakland police as an example of why such language is needed.)

The contract provision has become well known in activist circles in the Bay Area, making the Port an attractive target for direct action because of the potential for dramatic victory. In 2011, all ILWU work at the Port of Oakland was stopped twice by Occupy Oakland activists, first in November as part of a citywide “general strike” called in response to the police raid of the Occupy Oakland camp, and again in December as part of a planned shutdown of all U.S. ports on the West Coast. Then, in August, October, and November of 2013, picketing truckers and their supporters shut down the Port to protest working conditions for the drivers. (Port truck drivers cannot unionize because they are independent owner-operators.)

The frequency of these actions has led to a feeling amongst some ILWU members and leaders that workers are being used as an “instrument,” rather than approached as allies.

“Certain groups feel a huge sense of euphoria and power from shutting down the Port, but it’s important to remember that power comes from the sacrifice of workers willing to go without pay,” says Olney. “If groups abuse that power, certainly resentment will develop. Some groups have abused the goodwill and solidarity traditions of the ILWU.”

Olney contrasted Occupy Oakland activists unfavorably with community organizations involved in the resistances to South African apartheid and South American dictatorships, with whom he said the union had “worked closely and harmoniously” to carry out major actions.

This weekend’s “Block the Boat” action, too, had the potential to cause another rift between the union and community activists. The action was initially created by a handful of advocates on July 25, who planned to obstruct the ZIM vessel arriving on Saturday, August 2. This short time frame left little room for outreach to the ILWU. The Bay-based grassroots group Arab Resource and Organizing Center (AROC), which had also been considering a Port action, intervened.

“We proposed to [the original groups of] local activists to push it back to give us some time to do some outreach to the ILWU,” says Lara Kiswani, the executive director of AROC. Some ILWU members joined planning meetings for the protest, and young members of AROC went to the ILWU’s union hall every morning and afternoon to speak with workers about the situation in Israel and Palestine.

Saturday’s demonstration concluded with a declaration of victory in delaying, at least for one day, the docking and unloading of the Israeli ship. On Sunday, however, a rank-and-file longshoreman informed AROC organizers that the ship planned to dock that afternoon, and that union members had been called in to work to unload the cargo. Phone calls, emails, and messages on Facebook and Twitter began circulating around 4:00 p.m., calling on activists to return to the Port to put up a community picket line.

By 5:30 p.m., about 40 picketers were in place to block ILWU members from going to work. The crowd grew over the next hour, with volunteers shuttling picketers and supplies from the BART station. About 50 police officers were present, but they did not prevent the picket lines from forming.

Anthony, a member of ILWU Local 10 who had worked with organizers of the blockade action and asked that his last name not be used, was prepared to mediate with workers and try to talk them into honoring the picket line.

“I’m angry at any official government organization gunning down people who can’t defend themselves with the support of the U.S. government,” he said of his reasons for joining in the protest. He anticipated that his fellow union members would honor the picket line, but said, “As far as consciousness about Israel, I don’t know that there’s much of that.”

As workers arrived for the evening shift, they congregated on the side of the road about 100 yards from the picket line and waited for Melvin MacKay, the president of Local 10, to decide their course of action. None of those workers agreed to be interviewed, with one saying, “I’m not a politician. I don’t talk politics.”

MacKay, who has been a member for Local 10 for more than 20 years, told In These Times that he did not intend for his members to cross the picket line. “I think it’s a health and safety issue for my men to go across the line,” he said. “If they’re trying to block the line, we’re not going to cross.”

Eventually, MacKay led the workers away from the site of the protest, to cheers from the picketers. A statement from the ILWU issued Monday morning states, “When it was ascertained that last night’s demonstration and associated police presence created an unsafe environment, dispatched ILWU-represented Longshoremen and Clerks that arrived at the SSA gate to work stood by instead at a safe location away from the demonstration point. SSA, after recognizing the safety situation associated with ingress to their gates, released all ILWU manpower at 7:30 p.m.” SSA Marine is the operator of the terminal at the Port of Oakland.

Although the blockade was only intended to delay and not prevent unloading of the ship, organizers of the action considered it a historic win. “We just got confirmation for the second day in a row ... the ZIM ship did not get unloaded. We won,” Lara Kiswani announced to the picketers at 8:10 p.m., after word came that the workers were going home. “The workers honored our picket line. Israel apartheid is falling.”

Despite AROC’s intention to end the blockade on Sunday, a group of about 20 returned to the Port Monday morning. And though the protest was small, ILWU members again honored the community picket line: The shift was cancelled.

That evening, a larger group of protesters amassed around the Port. While about 50 police officers prevented them from forming a picket line across the entrance to the berth, few, if any, ILWU members entered it. At 9:20 p.m., activists received word that the shift had once again been cancelled, marking the third straight day the ZIM ship had been effectively stymied.

As the picketers prepared to go home, some spoke of returning in the morning at 5:30 a.m. to continue to picket. On Tuesday afternoon, the still-loaded ship left the area, purportedly for Los Angeles. However, after passing through the Golden Gate into the Pacific Ocean, it turned around and returned to a different berth at the Port of Oakland. Although protesters returned to mount another picket line, the ship's cargo was unloaded. Regardless, organizers promise that the actions will not end with this round of barricades.

“This ship comes every week,” warned Kiswani on Sunday. "So we’ll be coming back.”