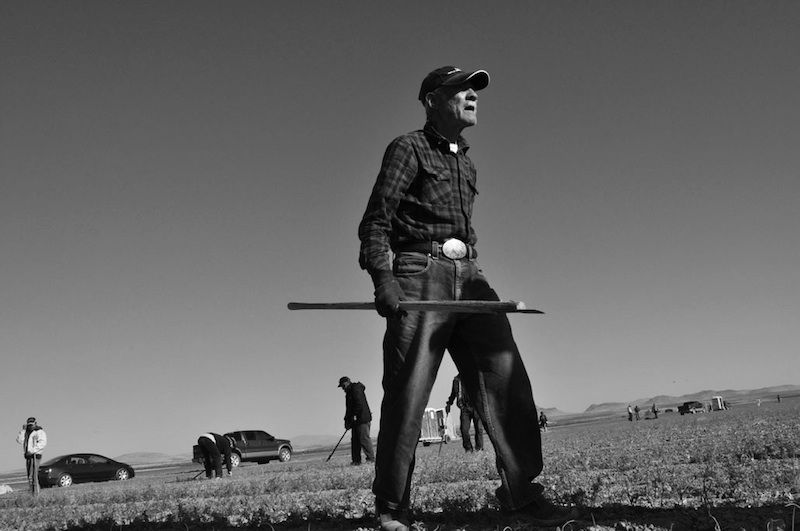 Despite orders from state officials, labor contractors are not racing to inform farmworkers of their rights or wages. (Joseph Sorrentino)

It has taken almost a year of emails, letters and pressure, but at least some of New Mexico's contratistas (farm labor contractors) are finally paying farmworkers the minimum wage they're entitled to. Until this year, they'd been paying the federal minimum wage, which is lower than the state's. The difference is small, only about an extra $10 a week, but for workers who are among the lowest paid in the US, every cent is crucial. The difference for contratistas, however, is enormous; even those with small crews have saved hundreds of dollars a week by underpaying workers and many thousands since New Mexico's minimum wage was increased on January 1, 2009.

In an Investigative Fund story for In These Times last year, I uncovered how wage theft was rampant in New Mexico's chile fields. One of the most common ways that contratistas were stealing wages was by routinely paying workers the federal minimum wage, which is $7.25 an hour—but they should have been paying New Mexico's wage, which is 25 cents more. While there is an exemption for small farms, the exemption somehow became standard practice on virtually all farms across the state.

Last year, María Martínez Sánchez, an Albuquerque attorney who has worked tirelessly for farmworker rights for years, informed New Mexico's Department of Workforce Solutions (DWS) about this discrepancy. In response, Jason Dean, the Division Director of the Labor Relations Division, sent an email to DWS employees on October 4. "It has come to my attention that our agency is not applying the NM 'Minimum Wage Act' ... correctly as it relates to our Migrant Farm Workers," he wrote. "This communication is intended to correct that error immediately. ... As an agency we should not unilaterally be telling all farm workers they are only entitled to the federal minimum wage. " But even though Dean said he wanted the error corrected "immediately," that didn't happen.

Dean followed-up his email with a letter to New Mexico's registered contratistas in late February of this year informing them that "the majority of farmworker employees ... should be paid an average of at least $7.50 an hour." That didn't do much, either. In April I found that, except on one farm, workers were still getting paid $7.25 an hour, for hourly wage work like weeding.

During my investigation last year, I spoke briefly with Dino Cervantes, the president of the New Mexico Chile Association (NMCA, an industry group) and told him that workers weren't being paid the correct wage. "If they're getting paid $7.25 an hour, (contratistas) are assuming that's right," he said. "They're not trying to exploit workers. Probably just a phone call will solve the problem."

Hardly. The email and letter from Dean proved ineffective, and it was only after a DWS investigation, in late June of this year, of a contratista who routinely underpaid workers—an investigation instigated by Tess Wilkes, another attorney who has worked diligently for farmworker rights—that he, and other contratistas, began paying workers the legal minimum wage.

Most farmworkers appreciate the few extra dollars in their pockets. "It's a little more money for the family," said Raúl Cardona, a worker from Zacatecas. "I can buy a little more food, tortillas, maybe some fruit for my children." Gregorio Carreto, a 72-year-old worker from Mexico City, said he would buy some school supplies for his grandchildren.

Not all workers were happy with the increase, however. "You really can't do anything with it," said Eddie (he only wanted his first name used), a worker from Ciudad Juarez. "I can't even buy gum for my kids. Burritos are $1 and you eat six a day, plus sodas. What we need is a dollar more."

It's extremely unlikely that workers will get that dollar more per hour. But it turns out, they're actually entitled to a lot more money.

During harvest season, chileros (chile pickers) begin lining the streets of El Paso as early as 1:00 a.m., hoping to be hired for the day. Some contratistas provide buses or vans that take workers to the fields in New Mexico, a two- or three-hour ride away. There they'll wait an hour or more until it's light enough to begin work. According to federal law, workers should be paid from the moment they arrive in the fields—something Dean even stated in his email to DWS employees and in the letter to contratistas.

I asked many workers about unpaid wait time, including 53-year-old Jorge Matien, who, like most farmworkers in El Paso, is originally from Ciudad Juarez. "Sometimes we get [to the fields] about 5 but we need to wait so we can see," he said. "So we wait one hour, a couple hours." And the pay? "Nothing. We don't get nothing until we start to work."

Last year, I asked Jaye Hawkins, the Director of the NMCA, why workers were taken to the fields so early if they couldn't start picking because it was dark. In an email, she wrote, "Mostly the workers want to take advantage of the cool times of the day ... most of this is to accommodate workers ... [and it's] cultural. Early mornings and [agriculture] kind of have always gone hand in hand. What good would it do for a [f]armer to want employees to arrive before they are scheduled or before [there is] harvest equipment and supervision at the field?"

I've learned from my reporting trips, though, that farmers do have harvest equipment and supervision in the fields—but workers still can't pick until it's light enough to see.

Getting paid for that wait time would be huge for workers. Not only do they typically wait an hour or more in the morning, they also wait again to be paid at the end of the day. That's at least $15 a day or $90 a week more for hourly workers who typically gross between $300 and $360 a week. Joy Forehand, DWS's deputy cabinet secretary, didn't respond to emailed questions about whether the agency will enforce the law. She did note, however, that DWS had finally finished an English version of the state minimum wage poster, which lists that most workers are to be paid $7.50 an hour. Until recently, the DWS website only had the federal poster, showing the lower hourly wage. A Spanish version, she said, is in the works.

With so many contratistas in New Mexico, there's no guarantee they'll all pay the correct wage, and it's extremely unlikely any are paying for wait time. Getting contratistas to obey all of the wage laws will take enforcement by DWS, along with fines for non-compliance, vigilance by advocates and, especially, demands from workers themselves for their wages and rights.

Reprinted with permission from The Investigative Fund.