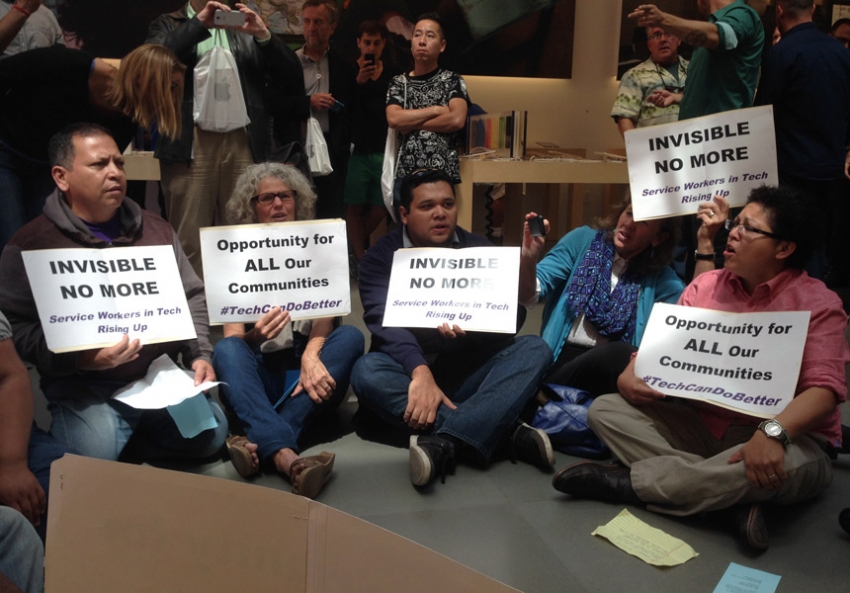 Twelve union activists staged a sit-in at an Apple Store in San Francisco last week to protest the tech giant’s use of a non-union subcontractor, Security Industry Specialists (SIS). The Thursday action came on the same day that Apple was drumming up buzz for a new product launch in early September. But the protesters, who carried signs reading “Invisible No More,” were intent on redirecting public attention to the rarely acknowledged men and women who provide security at Apple’s Northern California headquarters and retail stores.

“We are invisible and that really needs to stop,” says Kayla Gordon, who attended the protest but did not take part in the sit-in. Gordon, who worked as an officer for SIS until her hours were cut in 2012, says about the industry, “You don’t have a voice. It’s a hierarchy, and you don’t even know who’s controlling the show.”

As a security guard, she continues, “All you know is, ‘Be quiet, shut up, you don’t have a voice or you can’t work here anymore.'"

The protest was organized by SEIU United Service Workers West (USWW), a union of more than 40,000 janitors, security officers, airport, and other property service workers in San Francisco. Samuel Kehinde, organizing director for USWW, says the union is “calling on Apple to be a leader in Silicon Valley” and “use responsible contractors who allow workers to have a voice on the job.” Of major companies providing security for the tech industry, SIS is the only one that doesn't have a single union contract anywhere in the country, according to SEIU. Union representatives estimate that it provides more than 200 subcontracted security officers for Apple in Northern California alone.

Shortly after noon on Thursday, the protesters—who included leaders of the Service Employees International Union (SEIU) and other unions in California—sat down in a circle and began chanting “Apple, Apple, you’re no good, treat your workers like you should.” They then read the names of Silicon Valley security officers who have joined the union’s campaign to raise standards in the industry.

Although numerous police officers were already stationed at the store in advance of the protest, neither the police nor Apple management attempted to force the protesters to leave. The doors remained open and customers continued to shop.

Around 1:00 p.m., the protesters moved to block the entrance to the store by sitting down on the sidewalk directly in front of the store. Police quickly declared that this constituted an unlawful assembly and arrested the 12 protesters for failing to follow police orders. According to the commanding officer on the scene, the protesters will be cited and released.

Throughout the sit-in, about 150 other supporters rallied and picketed outside the store.

Nick Leahy, a spokesperson for Apple, arrived at the store shortly after the protest began, but refused to answer any questions about the protest or Apple’s choice of security contractor. Apple did not respond to written requests for comment.

None of the SIS security guards working during the protest agreed to be interviewed, with one stating, “I’m not allowed to discuss anything.”

According to Kehinde, SIS, which provides security for Google, Twitter and eBay as well as Apple, frequently intimidates workers and retaliates against those who get involved with the union around the country. SIS itself reports that SEIU has been trying to organize its employees for five years.

“Workers are very scared,” Kehinde says. “In the past, workers who got involved in union activity got pushed to on-call”—meaning their hours were reduced. Most security officers are already struggling to get enough hours of work to survive, he says.

Though SIS is arguably one of the most egregious offenders in terms of its treatment of workers, SEIU USWW is attempting to organize all of the approximately 3,000 security officers who serve Silicon Valley’s major tech campuses.

These security officers are often part of what SEIU calls an “underclass of Black and Latino workers” in the wealthy but increasingly unequal Bay Area. A report released on August 25 by advocacy group Working Partnerships USA contrasts Silicon Valley’s highly paid tech workers—the median wage for a systems software developer in Santa Clara County, for example, is $63.62 per hour—with the subcontracted workers who serve tech companies as security officers, whose median hourly wage is $14.17.

Because the workers are not directly employed by the tech companies, they don’t have access to the industry’s vaunted “benefits and amenities,” the report continues. A majority of security officers in Santa Clara aren’t even granted any paid sick days. And these workers are disproportionately Black and Latino, especially when compared to the overwhelmingly white or Asian makeup of tech’s direct workforce.

This discrepancy, Working Partnerships notes, is contributing to a cycle of racialized poverty that won’t be ameliorated by quick-fix hiring initiatives.

“If tech companies are serious about building a pipeline from K-12 schools for a more diverse tech workforce,” the report states, “it starts with paying their parents a livable wage.”

According to the report, San Jose, the major city in Santa Clara County, has the least number of “middle-income households” of the largest 357 U.S. metropolitan areas. In Santa Clara County as a whole, for that matter, 36 percent of Black-headed households and 59 percent of Latino-headed ones fall below the “Self-Sufficiency Standard”—a measure that determines how much income a household needs to survive without public subsidies.

Working Partnerships USA blames the “failure of Silicon Valley businesses to generate middle-wage jobs, combined with the lack of access to high-wage tech jobs” for leaving “large numbers of Black and Latino workers trapped in low-wage, near poverty-level work.” And given tech’s huge role in the local economy, activists point out, the onus is on companies like Apple to hire from contractors that pay employees a decent salary.

For example, reports SEIU, the unionized security workers in the area—most of whom are employed within San Francisco’s city limits—start at a minimum of $14 per hour but receive yearly increases, get fully paid health insurance for singles and affordable coverage for families, and have job protections, vacation and paid sick leave. The union contract also includes job advancement language that helps part-time workers move into full-time jobs. Unionized security guards comprised much of the crowd picketing outside the Apple store on Thursday.

Gordon, who is now an activist with SEIU USWW, says she’s glad the union held such a public protest. “People need to hear what’s going on,” she says.

She feels that subcontracted tech workers need access to the same sort of resources as those with lush engineering jobs in the same companies. “Security officers should at least get sick days,” she says, “and more hours to take care of their families.”

“I have an iPhone myself,” Gordon adds, noting that she and other consumers are boosting Apple's profits, “We should all be able to benefit from this economy."