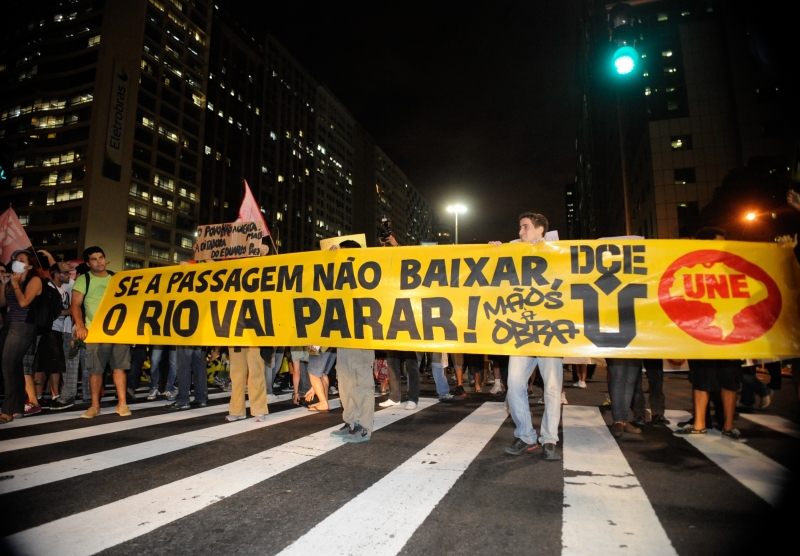 Protesters in Rio de Janeiro in 2013 with a banner reading, "If the fare doesn't drop, Rio is going to stop!" (Tânia Rêgo / Agência Brasi / Wikimedia Commons)

When I scanned my metro card in São Paulo the morning of January 6, the price rang up at 3.5 reals (1.33 US dollars)—50 centavos more than yesterday.

I’d been in São Paulo for about a week and a half, and the fare had been 3 reals every other day. Had I missed something?

As it turned out, the municipal government had just increased the cost of subway trips. I had seen "passe livre ja!" (“free passes now!”) graffiti around the city. And in 2013, militant protests, including many during the World Cup, beat back a 20 centavo fare increase.

Movement participants celebrated that victory and continued fighting for completely free, public transit system. And on Friday, January 9, tens of thousands of Paulistanos, as residents of São Paulo are known, rallied and marched against the most recent fare increase.

The protest was met with a strong backlash from the city government, controlled by the Workers Party (PT in Portuguese), when police unleased tear gas bombs and truncheons on the peaceful demonstrators—in plain contradiction to the mandate from leftists and people’s movements given to the PT in the last election.

The January 9 protest was organized by the Movimento Passe Livre (the Free Pass Movement, or MPL) that advocates for free public transit in Brazil. The movement was founded in 2005 at the World Social Forum in Brazil and gained international attention in massive protests in 2013 when demonstrators clashed with police in cities throughout the country. In some cities, protestors took over transit stations, demolishing turnstiles to allow passengers free access to the subway. Those protests came to be known as the Vinegar Revolt after 60 people were arrested for carrying vinegar to counter the effects of tear gas and pepper spray used by the police at protests.

The protests began when the city government announced that the cost of metro rides and bus fares would increase 6% by 20 centavos. Graffiti reading “3.20 nao!” (“3.20 no!”) still dots the walls of downtown buildings. The mass protests, which repeatedly jammed city streets, successfully prevented those increases.

In another victory for the movement, high school students in São Paulo received free fares starting in mid-January 2015. Students were a key part of the 2013 protests, providing an important militant faction able to effectively maintain protests even in the face of police violence.

The minimum wage in Brazil was recently raised to 724 reals a month ($268.21 US). With the fare increase, public transportation commutes will now eat up 19% of a minimum wage earner’s monthly pay.

“The cost of public transit is something that affects all workers,” says Sean Purdy, a history professor at the University of São Paulo and the representative for his department in the Brazilian professors union. “The cost is something that trade unions need to tackle. While there has been some improvement [for workers] in the last few years, there are still key issues of access to cultural and economic goods.”

The Working Class in the Free Pass Movement

From the beginning, workers and individual trade union activists have played important roles in the movement, and at various points, unions have supported the protests. The union that represents metro workers joined the 2013 protests, and the MPL maintained a regular dialogue with metro workers. The metro workers' union issue a statement decrying the fare hikes:

The rise in price of subway, train and bus fares has a tremendous impact on the life of many people, principally workers. … We know that the demonstrations show the dissatisfaction of the people with the high cost of living and against the politicians who don’t care about the awful conditions of transport and who privilege profit over social function.

The metalworkers union joined protests in 2013, protesting corruption in the transit system. In São Paulo, one metro line and the entire bus system is privatized. The São Paulo municipal government awards contracts to a cartel of transit companies which then maintains the system. The metalworkers union and other critics argued that savings from overpriced contracts and corruption could have more than covered the fare increases.

At a 2013 city council meeting in São Paulo, the president of the leftist trade union confederation, CUT (Central Worker’s Union), denounced the fare increases. At the same meeting, the president of the São Paulo bank workers union said that a 2011 survey revealed that 50% of members described problems with public transit as their highest priority.

The protests have, however, been organized completely outside the official labor movement. The MPL maintains an anti-party position. Most progressive trade unions in São Paulo are closely allied with the Workers’ Party (PT), the party currently in power in both the city of São Paulo and the federal government.

The PT has become the target of the free pass protests, with many viewing the PT’s advocacy of higher transit fees as a betrayal of their working class ties. The PT was created in large part by leftist trade unions in 1980 as part of a pro-democracy movement fighting the dictatorship, which came to end in 1985.

In a 1964 military coup, authoritarian forces took control of the Brazilian government. Following in the footsteps of Mussolini’s version of fascism, rather than outlawing labor unions, the dictatorship incorporated them into the official government and economic structure. Labor unions every year negotiated pay raises, and most workers were obstinately covered by union contracts.

In the late 1970s, an insurgent group of young trade unionists, including future president Luiz Inácio Lula da Silva’s metalworker’s union, led a series of strikes which ultimately helped topple the dictatorship. In 1980, these unionists, along with allies in the Catholic Church and community groups, launched the PT to contest political power.

Like many social democratic parties around the world, once in power, the PT has found itself in the position of implementing austerity measures. Lula’s 2002 election as president gave social movements high hopes that radical change was coming to Brazil. Today, many of those same movements critique the PT’s embrace of a neoliberal framework.

The PT and its allies, however, argue that they are in a sort of “financial straightjacket.” In their book on the history of the PT, Lula and the Workers Party in Brazil, Sue Branford and Bernando Kucinski described the panic that international financial markets felt at Lula’s potential election in 2002—and the almost extortionist measures they took to ensure that the new leftist government did not renege on paying back international debt.

MPL participants are mostly students and workers, who organize protests through social media. Many are also union members and activists, but unions lack a strong visible presence at these marches.

The protest on January 9 was lively, with 30,000 Paulistanos playing drums, holding banners, chanting and singing. Banners denounced both the São Paulo PT mayor, Fernando Habbab, and the state governor, Geraldo Alckmin (from the conservative PSDB party). The two had coordinated to implement the fare increase across the metro area.

After an open-air assembly where participants voted on the route, the march set off down major streets, passing multiple buildings that had been occupied by a homeless movement. Occupiers hung banners from balconies in the buildings, and the crowd paused to cheer for them.

When the march reached Paulista Avenue, one of the busiest commercial thoroughfares in São Paulo, riot police began firing tear gas canisters and rubber bullets. The huge protest disintegrated as tear gas choked marchers’ lungs, making it difficult to run from the police.

Many ducked into local cafes, where marchers watched broadcast live coverage as the police beat protestors at Paulista Avenue and drove them back with tear gas bombs. Given how peaceful the protest had been, onlookers found the level of force was shocking.

Outside of one café, a stream of protestors fleeing the violence filed by. They paused to show me bruises and burns from where they had been struck by rubber bullets or tear gas bombs. Everyone’s eyes were red, and many held bandanas soaked in vinegar on their faces.

This type of repression is likely to backfire on the Workers Party (PT), however. Most rank-and-file trade unionists and leftists supported the PT in the last round of elections. But given the numerous banners and posters denouncing the PT mayor, Fernando Haddad, it was clear that many protestors were already disenchanted with the party. This liberal use of tear gas will likely only further fuel that anger.

The 2013 protests began as small affairs, with only a couple thousand leftists, mainly students, marching through the streets. The protests exploded into massive urban rebellions after the police unleashed a wave of violence against the demonstrations. Labor unions, which had largely ignored the protests, joined in denouncing the police violence; despite their close ties to the PT, many began speaking publicly against the transit fare increase.

Given the MPL’s history, it was unlikely that the January 9 protest would be the last. Indeed, the last few weeks have seen two additional mass protests against the hikes, with even greater levels of police violence.

While the official labor movement didn’t participate in the January 9 protest, this may change rapidly if the PT government continues tear-gassing union members. Given the already high cost of transit, workers are unlikely to tolerate further increases without increased levels of protest.