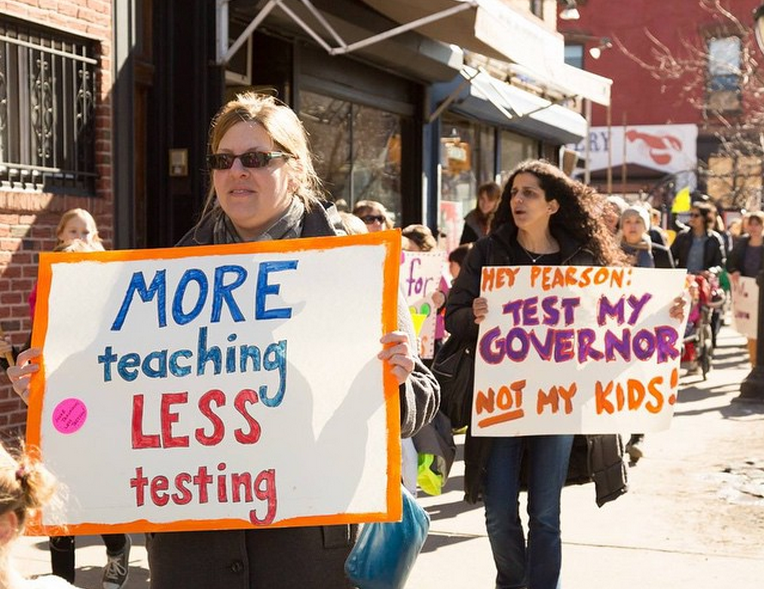 Last week, New York City teachers took to the streets in massive numbers to protest New York Gov. Andrew Cuomo. Cuomo, who has made no secret of his disdain for public school teachers, fired another salvo at public education with his 2015-2016 budget, which includes lifting the city’s charter school cap, tying teachers’ pay and retention to students’ test performance, and putting low performing schools into the hands of outside operators. In response, thousands of teachers and parents protested across almost 200 city schools.

On March 12, teachers, parents, and students around New York City took part in the Protect Our Schools action. According to Chalkbeat New York, planning began back in January, when Cuomo spelled out his reforms. A proposed $1.1 billion in additional funding could be rescinded by Cuomo, who is asking the state legislature to approve his education reforms. If legislators do not approve the budget, the funding increase drops by almost two-thirds, to $377 million. The demands were issued after Cuomo released a report that argued 91 New York City schools and 178 schools statewide were “failing.”

Teachers say the standardized tests are not just as a threat to their profession but also to public education as a whole. The tests serve as a gateway to all of Cuomo’s other reforms, including the opening of more charter schools, as students’ test results will play a large part in determining their fate.

Some parents stated they feared the loss of a well-rounded education as teachers began to teach to the test to keep their jobs.

“There is too much focus and too much stress on testing,” Brooklyn Public School 200 PTA President Concetta Aloi told the New York Daily News. “All the parents think too much time is spent on preparing kids for tests instead of learning the curriculum.”

The organization Class Size Matters said, in helping plan the protests, they wanted to prevent the state from taking over their schools.

“We don’t want the state to determine which schools and teachers are failing, which would enable more school closures and stake takeovers,” their protest flier stated.

Many see Cuomo’s education reforms as part of a larger plan to privatize public education, in which the opening of charter schools plays a key role. Some of Cuomo’s biggest donors are strong supporters of charter schools. And the governor has routinely sided with Eva Moskovitz, founder and CEO of Success Academy Charter Schools, in her battles with New York City Mayor Bill de Blasio—a stance which has cost Cuomo the support of the teachers’ unions and associations in the state.

According to Danielle Boudet, one of the organizers of the rallies, Cuomo’s policies and actions have managed to unite a lot of disparate groups and interests against him.

“People were fighting from their own individual circles, but his agenda has galvanized all those groups,” she told Chalkbeat.