When Temp Workers Die While Being Taken to the Job, Who’s Responsible? 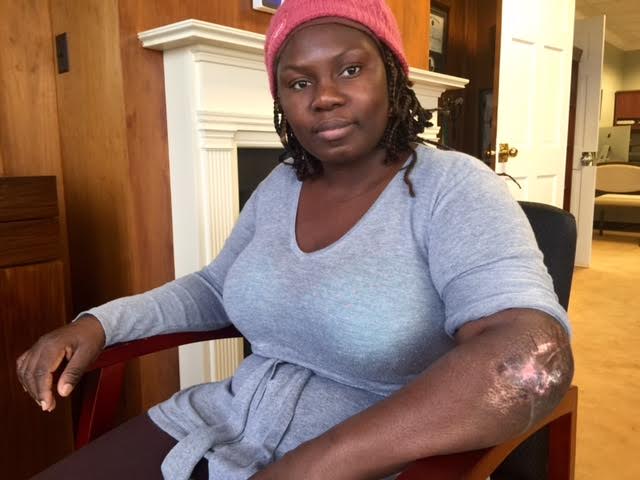 On September 24, just after 3 PM, a 36-year-old Haitian immigrant named Marianie Sanon was sitting on a particleboard bench in the back of a van overcrowded with 22 other Haitian temp workers on their way to the night shift at a factory in Evansville, Indiana. She noticed that the van driver seemed to be driving dangerously fast down Interstate 69. Sanon had recently moved from Miami to Washington, Indiana, on the hope of landing a good job at the local branch of a temp agency called ServiceXpress. This would have been her fourth day temping at a plant operated by AmeriQual, an Evansville, Indiana-based manufacturer of prepackaged military food for the Department of Defense.

The last thing Sanon remembers of the van ride was watching the driver—a 30-year-old man named James Allen who helped his father run a van service that he called “Haitian Transportation”—attempt a high-speed, slalom-like maneuver to get around a truck.

Three days later, Sanon emerged from a coma in a hospital in Evansville, Indiana. She had suffered severe head trauma, had several fractured vertebrae, a bone in her left arm had been shattered and she still had shards of glass still imbedded in her body.

The accident had left two of her fellow passengers dead. As it tumbled across the interstate, the van disintegrated, ejecting Sanon onto the pavement and sending more than a dozen other survivors to the hospital. As she lay in her hospital bed and gathered information about her co-workers, Sanon says she began to wonder why she had heard nothing from the temp agency—ServiceXpress, a subsidiary of Delaware-based Service General—that deployed her, or from AmerQual itself. Not only had there been no offer of help, but not a single person from either firm had checked in, called, visited or sent a letter, Sanon says.

Sanon called ServiceXpress and spoke with a manager. “She said she was sorry for what happened to me,” Sanon told me, “but that she cannot do anything for me.”

We thank you for your time that you have been with ServiceXpress; we want to help in some way from the traumatic experience that you have been through. We hope this gift card and food basket can help you get back on your feet. We want to wish you the best regards in everything you do.

Aside from the $50 Walmart credit, Sanon says that she soon received a paycheck from ServiceXpress that came to $71.00. (She says she never received the food basket referenced in the letter and has heard nothing from AmeriQual.) Meanwhile, Sanon, who was airlifted from the crash site, began receiving the first of her medical bills (many more are on their way), which quickly amounted, she says, to roughly $105,000.

Out of work and unable to pay rent on her apartment, Sanon soon became homeless. She currently sleeps in a women’s shelter in downtown Evansville.

Steven Chancellor is the Chairman of AmeriQual, according to Bloomberg. He has an ardent passion for big-game hunting on African safari trips and has even used his wealth and influence to lobby the Botswanan government to lift its ban on lion hunting. Chancellor has also proven an energetic Republican activist, hosting a high-profile fundraiser for Mitt Romney in 2012. Before that, he reportedly held a Republican fundraiser in 2004 election of President George W. Bush who, from the White House, assisted Chancellor’s crusade against Botswana’s lion hunting ban.

Immediately after the I-69 van crash, AmeriQual expressed sympathy for the victims but also made clear that it had enlisted the workers through ServiceXpress, which sent the temps to the factory for $11 per hour. Yet ServiceXpress, in turn, emphasized that the van’s driver worked for a different business. James Allen, the van’s driver, was recently arrested for his role in the van crash and Neil Chapman, Sanon’s attorney, says Allen likely has little in assets for the crash victims to draw from. (AmeriQual declined to provide comment for this story.)

Since the Great Recession, the temporary staffing industry has boomed, and temp employment has accounted for significant portions of rebounding job growth. Temps—who are employed by agencies and whose labor is simply rented out by third-party businesses—have become seen as some of America’s most vulnerable workers. Labor advocates say that, in treating workers as replaceable units of labor, the temp industry can overlook workers’ most basic human needs.  Through the layering of contractors and subcontractors, many corporations who rely on temps have effectively shielded themselves from numerous forms of liability for temps they retain through third-party agencies.

Labor advocates across the country have identified the safety of vans that transport temp workers to job sites as a key issue. In 2013, ProPublica published a diagram, drawn by a temp worker, of an overcrowded van said to be a typical feature of the New Jersey temp economy. Workers in New Jersey I spoke with this week say that they are still being transported in woefully overcrowded conditions.

“The problems with the vans from the agencies is that they pack them in over capacity,” a Spanish-speaking temp worker in northern New Jersey told me through a translator and labor organizer named Louis Kimmel, the executive director of New Labor. “Logically when it’s over capacity and no one has seatbelts on, for example—and sometimes drivers might be driving when they’re still drunk—we’re putting ourselves at risk just by getting into a full van like that.”

Sanon herself expressed surprise at the lack of responsibility assumed by AmeriQual and ServiceXpress after the crash. “I was like, how am in the hospital and why am I not hearing from anyone?” Sanon said. “I'm very strong, but really, I need help. I cannot do this by myself.”

Bamdad Bahar, the president of ServiceXpress, said that his office in Indiana did more than just send Walmart cards and food baskets. “[O]ur team there provided round the clock support for the employees, including taking family members to and from the various hospitals,” Bahar said in an email. “It was truly a heroic effort.” Bahar said that he had taken out life insurance plans that would provide the families of each deceased worker with a $5,000 payment.

Bahar also reiterated that his company has nothing to do with the accident. “I mentioned we provided maximum support feasible. This was NOT a workmans comp case, and was NOT an industrial accident. The driver and van company are NOT part of our company, and we are NOT responsible for the accident, the blown tire etc.” He added that he is looking into filing a libel suit against the local newspaper in Indiana, the Evansville Courier & Press, for its coverage of the accident. “There is really NO need to refer to us in relation to the accident,” Bahar said in a subsequent email. “I shut my operation in Indiana because of all this negative press.”

After the accident, Jacques Estime, who is involved in Washington, Indiana’s Haitian community, launched a fundraiser for the victims of the I-69 rollover crash. After securing enough money to pay for the funerals of the deceased, Estime said he split the leftover money 17 ways among the injured victims, who will each receive a check from Estime for $196.95.

In late September, shortly after the van crash, AmeriQual announced in a Facebook post that it would launch a donation drive among its full-time employees to compensate the injured temps. Yet Sanon has heard nothing about AmerQual’s fundraiser. It is unclear if the company gathered a single donation. Estime said the ServiceXpress had donated one thousand dollars to a funeral fund.

Estime told me that the victims are coping with an array of physical and psychological injuries. “Some of them are badly hurt, some of them need therapy,” Jacques told me. “Some haven’t been sleeping well. They've been having horrible nightmares. All they see are people dying.”

In late October, a Gibson County prosecutor reportedly filed 19 criminal charges against the van’s driver, James Allen, who had tested positive for marijuana during a blood test taken just after the crash. The charges against Allen range from “causing death while operating a vehicle under the influence of a controlled substance” to “causing serious bodily injury while operating under the influence,” according to the Evansville Courier & Press.

Last week, Sonan’s attorney, Neil Chapman, filed a suit against not only James Allen and his father, Robert, who owns the van, but also against Ameriqual and ServiceXpress. The civil complaint seeks to dispute any notion that the Allens’ transit business operated with autonomy from Xpress and AmeriQual, and asserts that the three businesses were operating as a joint venture. “A principle motivating factor for Ameriqual to choose ServiceXpress was because it offered a competitive advantage of other temporary agencies: transportation of the Haitian employees free-of charge as a part of its advertised, integrated incentive package to its factory clients.”

Sanon told me that, before the accident, she still owed $50 to a man she had paid $200 to bring her from Miami to Washington, Indiana. Although the AmeriQual wage was modest, it was the best she could find, she said, and she had hoped to use the earnings to become debt-free. With medical bills that she estimates total over $100,000, that goal now seems impossible.

“I’m struggling for my life right now,” Sonan said. “I cannot do this by myself.”