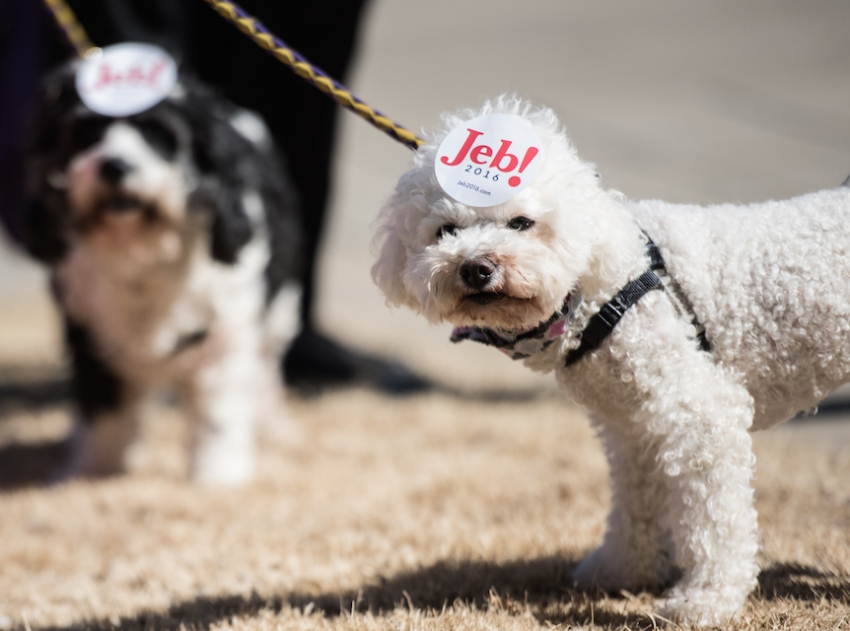 Just in case this is our last article ever about Jeb Bush: Please enjoy this photo.   (Photo by Sean Rayford/Getty Images)

In the spring of 2000, Jeb Bush, then governor of Florida, launched a campaign unprecedented in a state of that size: He set out to dismantle the state’s department of labor.

Like those across the country, Florida’s labor department carried out a range of duties, such as tracking workforce statistics, presenting annual awards to safety-conscious businesses, and running a hotline for workers to learn more about their rights. As of 1999, the department reportedly employed some 20 compliance investigators, whose duties including policing child labor, overseeing low-wage industries like fast food and agriculture, and fielding complaints of minimum wage violations.

By the end of his first term, Bush had largely succeeded.

He pushed through a plan to dissolve the department and scatter its functions among a number of state offices, including a semi-privatized agency called Workforce Florida Inc. By the end of his tenure as governor, the state of Florida employed not a single official dedicated to enforcing its wage and hour laws, according to Cynthia Hernandez, who studied wage theft in Florida for nearly a decade as a researcher at Florida International University.

During his quest for the Republican presidential nomination, Jeb Bush’s record as Florida’s governor has been vigorously picked apart. Yet his aggressive approach to Florida’s labor department has gone almost wholly unmentioned. While Republican governors have had their share of spats with state workforce agencies, Bush is the only one in recent memory to have simply dissolved a labor department.

Although Bush almost never mentions this chapter of his political history, it marks him as something of a trailblazer in states’ weakening of labor departments over the ensuing years. And his elimination of the agency carries a legacy that Floridians still live with. Despite having the country’s fourth-largest workforce, the state of Florida has not brought a single wage-and-hour enforcement action against an employer since 2011. Florida is the largest of five states in the country that do not enforce wage-and-hour laws, according to a 2011 survey of state-level enforcement. The second largest, Georgia, has half Florida’s population.

Labor advocates point to Florida as exemplifying a nationwide trend of wage-and-hour enforcement being weakened to the point that some industries face little compulsion to follow the law.

“This is the wild, wild West for employers,” says Cynthia Hernandez, who is now the executive director of the South Florida AFL-CIO. “What has happened since the dismantling of the department of labor is egregious to say the least.”

Hernandez’s research has found that, in the years following Bush’s actions, wage-and-hour violations have proliferated. Floridian workers who suspect their wages are being stolen can file complaints with the federal Department of Labor, although the agency is already stretched thin and often lacks jurisdiction over state wage claims. Hernandez analyzed these complaints and found that employees in Florida are losing of millions of dollars in pay each year with little recourse.

Bush’s dissolution of Florida’s labor department presaged a national trend. More than a dozen states have since defunded their labor departments, significantly weakening enforcement. Both Democratic and Republican lawmakers have backed these efforts, which have also received support from business lobbies that have sought to reframe labor-law enforcement as an anti-business activity that shouldn’t receive taxpayer funding.

In 2012, for instance, Virginia’s legislature quietly eliminated that state’s entire wage-and-hour enforcement division. The effects were quickly felt by workers in the state. As I reported in 2013, one Virginia worker told In These Times he had to resort to a form of vigilantism after a construction contractor allegedly refused to pay him more than a thousand dollars in wages. When the worker, Anthony van Buren, called the state department of labor to complain, he found, to his disbelief, that the enforcement agency had been dissolved. He was told to hire an attorney to bring a civil suit against his employer. On the cusp of eviction and unable to afford a lawyer, van Buren drove more than one hundred miles to find and confront his former boss and demand his back pay. (Van Buren ultimately received a portion of what he was owed,)

Wage-and-hour investigators in states with defunded departments spoke of cracking under the pressure of excessive caseloads and mounting backlogs. Bobby Myers, who worked as a wage-and-hour investigator in Virginia said that, after a round of defunding, he would “just file ‘no’ ” on hard-to-investigate wage theft complaints, even when they seemed legitimate.

“Our powers were just really weak. We were constantly bluffing,” Myers said. “Some repeat offenders eventually learned to call our bluff, and then there was very little we could do.”

After hearing testimony from workers in the state who had been cheated out of their wages with no agency to turn to, Virginia’s legislature voted in 2013 to restore the enforcement division's funding.

In the case of Florida, the absence of a state enforcement agency for wage-and-hour claims has caused the state’s thousands of wage theft cases to fall primarily on the shoulders of the U.S. Department of Labor. But, as of 2010, according to research by Hernandez, the federal agency had only six investigators assigned to the entire state, each one responsible for some 1.2 million workers.

Florida’s Republican attorney general, Pam Bondi, can pursue wage theft complaints. A spokesperson for BondiBo office asserted that the agency does enforce the state minimum wage, but, in a follow-up email, added that the office had not conducted a formal enforcement activity since 2011.

“I have dealt with the AG's office since 2006,” José Javier Rodriguez, a Democrat in the Florida House of Representatives, wrote in an email to In These Times. “They do very little other than field calls in cases where there is misinformation or confusion about the minimum wage, like how it applies to tipped workers, but no enforcement.”

In 2011, Florida formed the Department of Economic Opportunity, which administers unemployment benefits and job training programs. A spokesperson for the agency told me that, apart from seeking help from the U.S. Department of Labor, the only other option for a worker seeking withheld wages is to file a civil suit.

To do so, workers must not only be prepared to face steep attorney’s fees, but also a drawn-out process in the state’s backlogged court system. And this speaks to another of Hernandez’s criticisms of Bush’s axing of the labor department: the inefficiencies of shifting responsibility from a state agency to institutions that should often be treated as avenues of last resort.

“This puts the burden on the federal offices and it puts more pressure on the court system,"  Hernandez said, adding that, in the meantime,  “we’ve been seeing that cases of wage theft have continued to increase.”