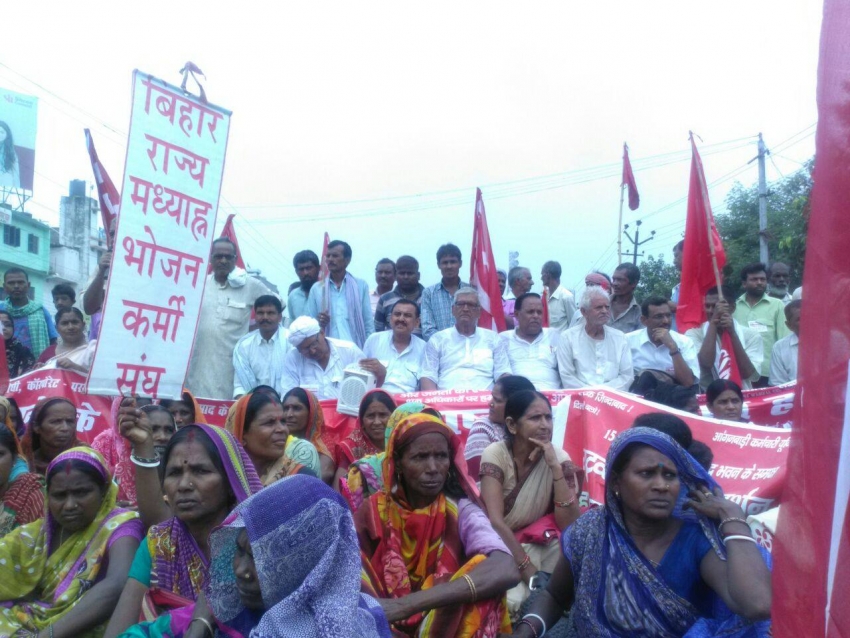 Unions have a 12-point “charter of demands” that includes not only higher minimum wages but better enforcement of labor laws, an end to privatization of the public sector, guaranteed pensions and social security protections for all workers, and an end to foreign investment in India’s railway, insurance and defense industries. (Centre of Indian Trade Unions/ Facebook)

Trade unionists in India staged a nationwide strike last week that affected key sectors of the nation’s economy, including transportation, healthcare, finance, energy, coal, steel, defense and education. Organizers reportedly claimed that more than 150 million people took part and that it cost the economy some $2.5 billion, making the strike the "world's largest."

Those numbers could not be independently confirmed, but this much is clear: Workers are angry at the Indian government and unwilling to accept its neoliberal economic agenda without a fight.

Union leaders had asked for negotiations in March, and called the September 2 strike when government officials ignored them. On August 30, in a last-minute attempt to head off the strike, the government proposed to increase the minimum wage for unskilled workers employed by the central government, from about $3.70 to $5.20 per day. The offer wasn’t enough. Union leaders rejected the proposal, which didn’t begin to address their broader, far-reaching agenda.

Unions have a 12-point “charter of demands” that includes not only higher minimum wages but better enforcement of labor laws, an end to privatization of the public sector, guaranteed pensions and social security protections for all workers, and an end to foreign investment in India’s railway, insurance and defense industries.

Tapan Sen, general secretary of the Centre of Indian Trade Unions, accused the government of a “vile conspiracy” to privatize India’s public sector. "We have been putting forward our demands for the last five years,” Sen said, according to Reuters. “But over the last year no minister has even met the trade unions.”

The effects of the strike varied widely from state to state and sector to sector across the nation. For example, the state of Kerala, which has a long tradition of supporting Communist politicians, and where the state assembly is dominated by the Left Democratic Front, was almost completely shut down. The state’s chief minister, Pinarayi Vijayan, expressed support for the strike on his Facebook page.

Across the nation, the transportation and banking sectors were particularly affected. In the state of Telangana, about 15,000 bank employees participated in the strike and froze banking operations for the day. In the state of Tripura, a newspaper reported, normal life was “paralyzed,” and the “state capital Agartala wore a deserted look with public transport vehicles staying off the roads.”

India has about 1.2 billion people, or 17.5 percent of the world’s population, and a workforce of about 500 million people. The Guardian reported that fewer than 4 percent of workers “come under labor protection,” and that “private employers who wish to discourage any kind of unionisation are being actively encouraged by the central government,” according to Jayati Ghosh, an economist at Jawaharlal Nehru University in Delhi.

This unofficial campaign against organized labor is taking place within two relevant contexts. One is the New Economic Policy that India launched in 1991, an economic program in which it embraced neoliberal economic principles, including the deregulation of industry, the privatization of the public sphere, low tariffs and corporate taxes and a friendly environment for foreign investment.

The second context is the rise of Narendra Modi, who became the nation’s prime minister when his BJP party swept into power in the 2014 elections.

Modi’s political success is rooted in his reputation for creating a vibrant economy in the state of Gujarat, where he was chief minister from 2001 to 2014. As The Economist noted in 2015, “Gujarat is richer, enjoys faster GDP growth and a greater intensity of jobs and industry than India as a whole.” Specifically, the state has 5 percent of the nation’s population and 6 percent of its land mass, but it “accounts for 7.6 percent of its GDP, almost a tenth of its workforce, and 22 percent of its exports,” The Economist reported.

The “Gujarat model,” as it is sometimes referred to, is a microcosm in which neoliberal principles reign. Modi is the vehicle for the broad application of that model to India as a whole—in the same way that Gov. Rick Perry, in his bids for the GOP presidential nomination, touted the business-friendly culture in Texas as the prescription for a vibrant American economy.

But the “Gujarat model” falls apart under scrutiny. The high rate of strong overall economic growth disguises increasing disparities and inequalities. In a 2014 article in the Indian magazine Frontline, for example, two scholars noted that Gujarat ranked ninth in an index of human development among Indian states. Specifically, nearly 52 percent of children were undernourished—an increase from the early 1990s. And the literacy rate for children above the age of 6, although higher than the national average, actually declined between 1999 and 2008.

The scholars concluded that “the muddled and selective presentation of facts in the mainstream media on Gujarat, which does not highlight the failure of the Gujarat government to provide basic needs and the welfare requirements of the poor, has helped to project the Gujarat model as an ‘alternative’ for India.”

As in the United States and across the globe, the success of the neoliberal project in India has primarily meant more wealth for the wealthy—and false promises of trickle-down benefits to workers. Last week’s strike was one concentrated protest against the relentless march of that project. Whether momentum from the strike can be leveraged into a more durable and broad-based movement, and how the movement can expose and overcome the myths of the Gujarat model, remains to be seen.