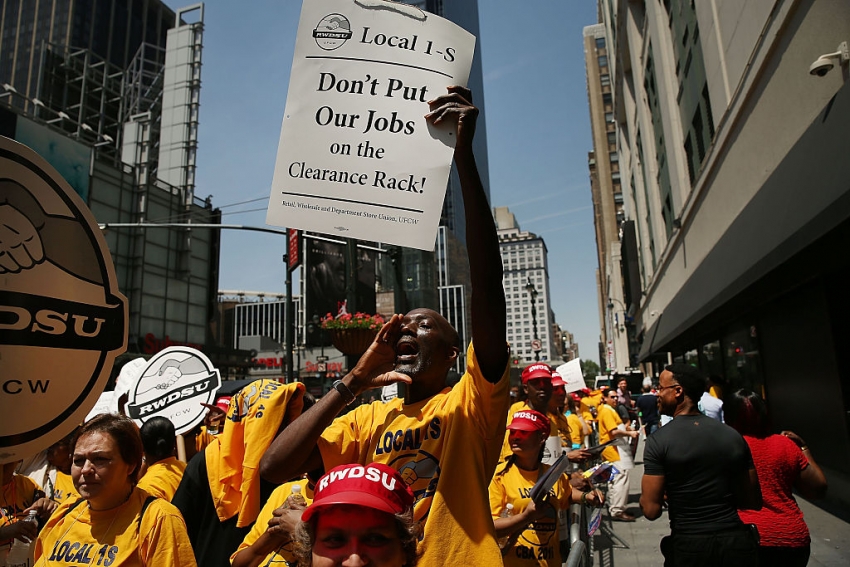 The drumbeat of anti-unionism typically begins as soon as new employees begin their training. (Photo by Spencer Platt/Getty Images)

Retail is the nation’s largest employer. Since 1980, the number of jobs in retail has reportedly grown nearly 50 percent, from 10.2 to 15.1 million. At the same time, real wages for retail workers have fallen by 11 percent while on-call scheduling, involuntary part-time work and “clopening”—where workers are required to lock up the store late at night and reopen the next morning—have wreaked havoc with workers’ lives. Not surprisingly, the retail sector also has one of the lowest rates of unionization in the economy—around the 5 percent mark under which unions have virtually no influence.

It didn’t used to be this way.

Retail had 15 percent union density in the 1970s, according to sociologist Peter Ikeler, with the density rate in grocery stores surpassing 31 percent at its peak in 1983. But, as with the rest of the labor movement, retail unionism has taken a steep fall since the early 1980s.

How did it go so wrong?

“There are a lot of parts to that puzzle,” says Ikeler, a sociologist at the State University of New York College at Old Westbury and author of the book, Hard Sell: Work and Resistance in Retail Chains.

Ikeler cites the general trend towards de-unionization of the U.S. workforce and the hollowing out of the National Labor Relations Act system through case law and employer challenges. But the most important factor in the fall of retail unionism, Ikeler argues, has been employer hostility.

“The climate for labor organizing in retail is pretty explicitly negative,” Ikeler says.

In a case Ikeler describes in his book, the public was able to get a glimpse of Target’s anti-union strategies—including mandatory film screenings and employees threatened with dismissal for talking about the union—during a highly publicized 2011 campaign to keep the United Food and Commercial Workers (UFCW) from organizing one of its stores on Long Island. And across the retail industry, Target is far from unique.

The drumbeat of anti-unionism typically begins as soon as new employees begin their training. New worker orientations at Walmart, the nation’s leading retailer, used to include a video that featured lines like: “The truth is unions are businesses, multimillion-dollar businesses that make their money by convincing people like you and me to give them a part of our paychecks.” According to The Atlantic, labor experts who had examined the entire video after it was leaked to the press found that it contained “blatant untruths in many of the video’s pro-company and anti-union statements.”

Even smaller, regional chains invest in anti-union propaganda for new hires. According to internal documents provided to In These Times by an employee of Big Y, the Massachusetts-based grocer warns new hires about signing a union authorization card since the company’s “continued success” would be “jeopardized through third party involvement.”

To research his book, Ikeler interviewed workers at Macy’s and Target stores in the New York City area. Many reported knowing that managers disapproved of unions. Several Target workers told Ikeler they were sure their jobs would be in jeopardy if they advocated for unions and reported that they knew people who’d been fired for union activity.

When contacted for comment, a Target spokeswoman said that the company “believes in solving issues and concerns with the help and input of our team.”

“At Target we have a longstanding commitment to our team that we will work together to create an environment of mutual trust between Target and our team members,” wrote Molly Snyder.

While employer resistance played the biggest role in the decline of retail unionism, Ikeler believes that unions also share part of the blame. Specifically, he thinks that unions have done a lousy job of keeping workers engaged.

Ikeler points out that surveys indicate that around 13 percent of grocery store workers in the New York City area say they belong to a union. This is in contrast to the unions themselves, which say they represent a much larger share of such workers in the Big Apple.

“What I think this huge disparity demonstrates,” Ikeler tells In These Times, “is that there are a fair number of workers who aren’t aware they’re in a union—it’s just something that comes out of their check every month. Sure, they might be organized in some bureaucratic sense—just not in any meaningful fighting capacity.”

In Ikeler’s view, labor unions need to step up their organizing and “get back to what unions were in their early New Deal days: more worker-based rather these large staff-run, top-heavy entities that give lots of money to Democratic candidates every few years with relatively little payback.”

A construct that can be challenged

Ikeler also sees a lot of potential in the worker center model. Worker centers like the Retail Action Project, which Ikeler has studied extensively, give workers a place to go to form communities, talk about work conditions and plan campaigns. Another clear benefit is that worker centers help cultivate a sense of occupational identity in a sector of the economy known for deskilling workers in order to make them more easily replaceable.

“A strong occupational identity—where workers are very committed to a craft, to an occupation—this has often been a source of collective identity and resistance,” Ikeler says. “If workers see themselves as part of an occupational community they may be more likely to form organizations together and put up collective resistance.”

Worker centers can’t replace unions, but the two types of organizations can work together.

“To see success,” Ikeler says, “to see large-scale organizing and an advance for the low-wage service sector, we’re going to have to see greater synergy than we’ve previously seen between worker centers and national unions that are actually willing to take risks and use some of their treasury by going on strike.”

When asked if he saw any bright spots on the retail scene today, Ikeler pointed to a recent victory by Stop & Shop workers in New England. After threatening to strike in February, the UFCW negotiated a favorable contract for its 35,000 members in the region, including a quicker route to a $15 hourly wage and a promise from the company to add 480 new full time jobs over the next three years.

The victory calls to mind an uplifting passage from Hard Sell, where Ikeler writes that “bad” service jobs are “not an unalterable fact of life but a social construct that can be challenged.”