West Virginia Teachers Are Staging a Statewide Strike. Here’s Why. 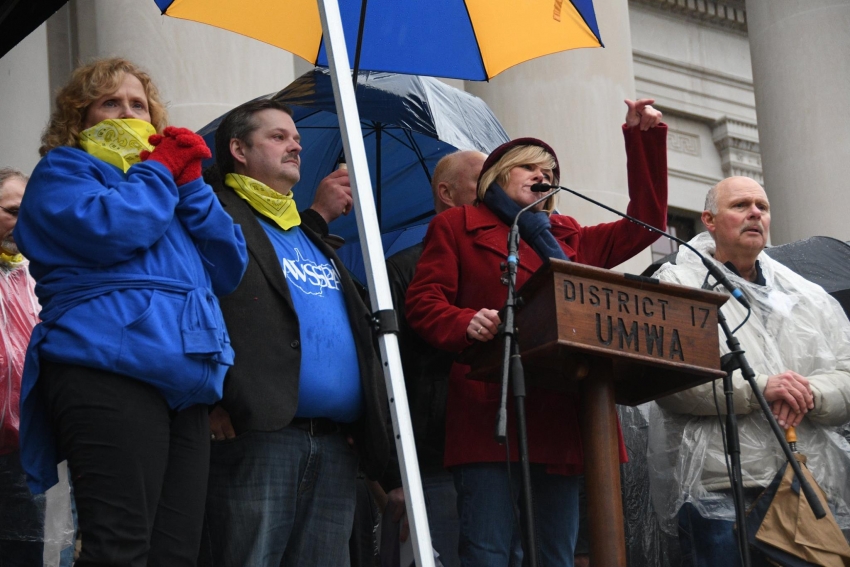 “The entire state of West Virginia will be shut down,” says Dale Lee, the president of the West Virginia Education Association. (AFT-WV / Facebook)

Update: On Feb. 22, teachers across West Virginia walked out on strike, closing down every public school in the state.

Teachers and service personnel across West Virginia are planning to strike on Feb. 22 and 23 in an effort to boost pay and lower their increasing healthcare costs. It will be the first statewide walkout in nearly 30 years.

The strike was announced by the American Federation of Teachers-West Virginia and the West Virginia Education Association (WVEA) during a weekend rally at the state capitol in Charleston that attracted teachers and other public sector employees and supporters. Hundreds also showed up at the capitol on Feb. 2, where they sang “Na, na, na, na, na, na, na, na, hey, hey, goodbye!” while Tim Armstead, Republican Speaker of the W.V. House of Delegates, gave a speech on the House floor. At this past weekend’s rally, WVEA President Dale Lee declared that all 55 of the state’s counties were prepared to stand united. “The entire state of West Virginia will be shut down,” declared Lee, whose union is an affiliate of the National Education Association.

According to a 2017 study that ranked each state’s average teacher salary, West Virginia is the sixth worst in the country. On average, the state’s teachers make $45,477, compared to first-place-ranking Alaska, where teachers make $77,843. W.V. teachers want the state to fund the state’s Public Employee Insurance Agency (PEIA) and increase their salaries. The state’s House of Delegates has voted to give public school teachers 2-percent raises next year and a 1-percent raise over the next three years, while the state’s Senate has approved a 1-percent raise, every year, over the next five years. Union representatives believe these raises are inadequate, especially when considered alongside the rising costs of healthcare.

Kym Randolph, director of communications for the WVEA, tells In These Times that dissatisfaction has been brewing for years. “It’s a number of things,” says Randolph. “PEIA, lack of salary, years of neglect, anti-worker policies … healthcare that’s inadequate.” According to Randolph, lawmakers have become “entrenched” on the issue of teacher salaries and are difficult to persuade.

One of those lawmakers is Republican Gov. Jim Justice. He has proposed freezing PEIA for a year, effectively preventing health premiums from rising, and he doesn’t believe that the 1-percent raise, every year, over the course of five years should be increased in any way. “I think the prudent thing and the smart money is to fix PEIA like we’ve done, and the smart money is to stay at 1-1-1-1-1,” said Justice at a recent press conference. However, his critics point out that a PEIA freeze is merely a short-term solution for a problem that isn’t going away, and such a temporary action could give birth to even higher healthcare costs in 2019. The teachers are looking for a long-term plan that provides security while finally making salaries competitive.

In that same press conference, Justice said that a teachers’ strike would be a “crying shame.” He also dismissed a Senate Democrat proposal that would fund PEIA by raising the state’s severance tax on natural gas as “political grandstanding.”

West Virginia is often portrayed as a steadfastly Republican state where progressive developments are nearly impossible. Nearly 70 percent of the state voted for Trump, who promised to revive the floundering coal industry, and the state’s Democratic Senator Joe Manchin votes in line with Trump almost 60 percent of the time.

However, a deeper analysis of the state’s current politics reveals a slightly more nuanced picture. Bernie Sanders won all 55 counties in the 2016 Democratic Primary, and recent data suggests that support for Trump is actually dropping. Between January and September of 2017, Trump’s level of net support in West Virginia went down by 13 points. Last month, Paula Jean Swearengin, a progressive Democrat who is running against Manchin in the primary, told In These Times, “We have fought so many labor struggles and won. This nation and state deserve true democracy. … We all struggle and are going to fight like hell. I believe a new West Virginia is being born.”

Swearengin’s assertion will be put to the test in the coming months as the state’s teachers continue to fight, through the walkout and beyond. “I think what the Legislature is doing is just despicable,” a high school science teacher named Lisa Stillion told West Virginia Public Radio at last week’s rally. “We need to vote them out. Get your heads out of your rear ends; be thinking about who you represent. You work for us. We don’t work for you.”