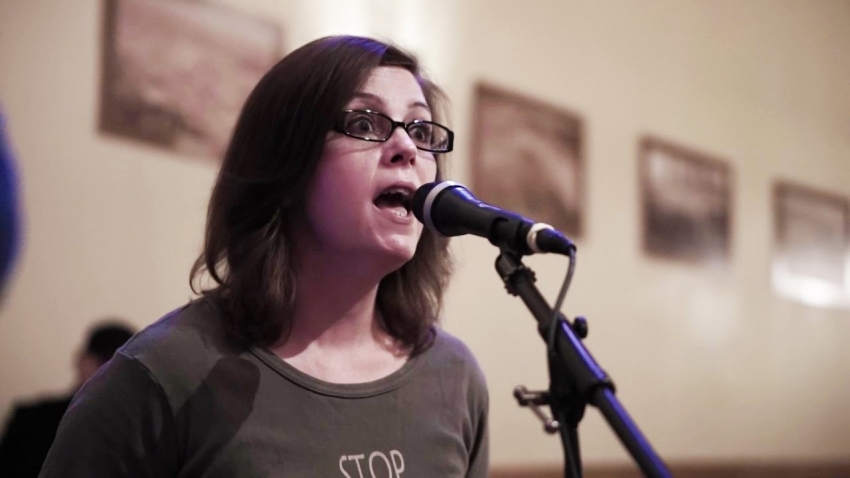 Paula Jean Swearengin is running to unseat Sen. Joe Manchin in West Virginia and rein in the power of the coal industry in the state. (Youtube/The Young Turks)

Our incumbents, Democrats and Republicans, have been coal industry servants. They haven’t been servants for the people and definitely haven’t been friends of coal miners.

Editor's note: In 2018, Paula Jean Swearengin lost to the incumbent conservative Democrat Sen. Joe Manchin with 30% of the vote—the most primary votes against an incumbent U.S. senator in West Virginia in 75 years. On June 9, 2020, Swearengin beat her two Democratic opponents and will face Republican Sen. Shelly Moore Capito in November. The following is a conversation with the progressive challenger from January 11, 2018.

On Dec. 27, 2017, self-professed “hillbilly” Paula Jean Swearengin flew from her hometown of West Virginia to the posh enclave of Beverly Hills, Calif., to participate in a forum of reform-minded women running for Congress. But Swearengin, who is running in the Democratic primary for West Virginia Senate against incumbent Joe Manchin, has more in common with feisty fictional Southern union organizer Norma Rae than with the Clampetts of “Beverly Hillbillies.”

Unlike the oil rich Clampetts who struck “black gold” on their land, Swearengin is critical of the energy industry, especially coal, which she told the forum’s standing room-only crowd had led to her relatives’ deaths by way of black lung disease.

“I saw my grandfather suffocate to death,” thundered the 43-year-old single mother of four. “I’m not going to worship a black rock.”

The forum, billed as a “Nearly New Year’s Revolution Party,” was organized by the Justice Democrats, a federal political action committee which has endorsed 51 Senate and House candidates, including Swearengin, who all oppose the Democratic Party’s corporate wing and have pledged not to take donations from corporations and SuperPACs.

In the May 8 primary, Swearengin will go up against Manchin, a conservative Democrat and longtime ally of the coal industry who voted for Scott Pruitt, President Trump’s pick to head the EPA, and supported leaving the Paris Climate Treaty. Swearengin, meanwhile, is running on a platform of single-payer healthcare, a $15 minimum wage, free public college tuition and an end to fracking and mountaintop removal.

In this candid conversation, Swearengin, discusses her dark horse candidacy, her views on a Green New Deal, socialism, economic justice and much more.

Tell us about your background?

I was born in Mullens, West Virginia, and lived in a community called Iroquois in Appalachia. We faced heavy pollution. Our water came from the Sweeney Watershed, which meant we essentially drank acid mine drainage. The water was orange with a blue and purple film. I thought my hair was red or orange, I didn’t know I was a brunette until we moved away and had clean water.

We had a slate dump that continually burned above the community that also caused air pollution, like a sulfur smell. When I was 12, my stepdad got laid off in the coal mines and we moved to Yadkinville, North Carolina. There, my stepdad worked in a furniture factory and my mother in a nursing home.

I have diverticulitis. Most of my family have stomach issues because of the water we drank when we were little. Lots of people have gastrointestinal issues in Appalachian coal communities. When I was little I had asthma. My mother would take me and my brothers and sisters to the doctor all the time. When we moved to North Carolina our health did get better but since I am getting older my health has declined.

How do you react to being called a “hillbilly”?

It doesn’t bother me to be called a “hillbilly” because I lived in the hills. I grew up in the hills and the mountains are my home. We have had the stigma where people said Appalachians don’t have no teeth, no shoes, no brains. But Appalachians are some of the greatest people in the world.

How did you become an activist?

I started my path in activism after my grandfather got sick with black lung. I moved to Lester, West Virginia, where they were closing the local school because of funny smells. An eight-year-old neighbor named Bethany was diagnosed with a rare form of bone cancer.

Later, when I found out about mountaintop removal, people were still dealing with the same kind of water issues I had growing up. When they blew up the mountaintops they buried many rivers and streams in West Virginia. When they disturbed the rocks it created silica dust. So now, not only do people have to worry about silicosis in underground mines, but silica dust is actually going into the lungs of our children. It’s been proven there’s a high rate of birth defects and other health issues.

I got angry and active. People labeled me an “environmental activist,” but I saw myself as a social and economic justice activist. I worked with the Ohio Valley Environmental Coalition and the Keepers of the Mountain Foundation. I spoke to the U.N., I went around the country speaking at rallies, at colleges, to anybody who’d hear us, trying to get some help for West Virginia, because our representatives weren’t hearing us. Democrat Jim Justice is one of the biggest polluting coal barons and now he’s our governor.

That started my path running for office.

In March 2017, I attended a town hall held by Manchin. I talked about my family dying, the water pollution, the air pollution, telling him we wanted clean and safe jobs and I didn’t feel like we should have to kill each other to prosper here. And Manchin told me “We’re gonna agree to disagree.”

So that says to me that despite the service our men and women went through in the coal industry, to Manchin it didn’t matter whether their children and grandchildren had clean air or water. Our incumbents, Democrats and Republicans, have been coal industry servants. They haven’t been servants for the people and definitely haven’t been friends of coal miners.

The reason I decided to run for Senate is that most Democrats and Republicans are in bed with industry. Manchin’s top donor has been coal; his second top donor is Mylan Pharmaceutical [known for the price hike scandal of EpiPen, used for emergency treatment of life-threatening allergic reactions] and his daughter [Heather Bresch] is Mylan’s CEO.

Attorney General Patrick Morrissey is on the ticket for the Senate. He’s been a lobbyist for a pharmaceutical company and his wife is still a lobbyist.

The biggest disgrace about the West Virginia Senate race is Don Blankenship, former CEO of Massey Energy. In 2010, 29 miners died in his mine due to a methane explosion. I’ve been fighting Massey Energy for years because they don’t adhere to regulations, not only for miners’ safety but for the water and health of the community. Blankenship was indicted, put in jail and is still on probation. He’s actually on the ballot now as a Republican for the Senate.

How do you differ from Sen. Manchin and other establishment Democrats?

My campaign is people-funded, I will not take corporate money or lobbyists’ money. The average donation I receive is about $14 or $15. So far we have raised almost $200,000, and none of that comes from the coal industry.

Bernie Sanders won the Democratic primary in West Virginia. Did you support him?

Absolutely. Bernie Sanders is the only politician who actually cared about West Virginia. He came up here for a town hall after he lost the primary to highlight the poverty here. I actually got to sit down and talk with him. I thought, “This man really cares.”

I walked up to him and asked him for a few minutes of his time. I walked to the back of the auditorium and to the front with him while he talked to the people and the media and when we got to the front he made me cry. Because he stopped everything, he put his arms out and said, “Wait a minute. I promised this woman I’d talk with her.”

Bernie won all of West Virginia’s 55 counties in the primary. Most of the superdelegates—Manchin and the establishment Democrats—voted against him. I don’t think there’s a lot a senator from Vermont can do for us unless our incumbents get out of bed with the corporate donors. But he heard me. And that’s the first time in all my years I’ve ever seen a senator care that much.

That kind of led me to my path to office, too. It made me realize that if we don’t try to do something with the political structure here and get rid of the corruption, people are going to continue to die.

If West Virginians don’t unite, stand up, and work for all of us on a local and federal level, our children are not going to have a future here. We’re treated like we’re collateral damage. Our land, heritage and health have been destroyed by these companies.

Bernie is a democratic socialist. Are you?

I don’t know what kind of label I have. I’m just a West Virginian, I’m mad and I’m trying to fight back. The social programs Bernie Sanders talks about I totally agree with 100%. I stand behind Medicare for All. West Virginia is one of the sickest, poorest states in the nation. As much as this state has sacrificed to power this nation we certainly deserve healthcare.

Do you support moving the economy towards a Green New Deal with wind, solar and other alternative energy sources?

I have a broad vision. We can mix renewables, we can manufacture and we can fully legalize cannabis. We can have hydropower, biofuels, there’s all kinds of investments we need. If we’re going to have a future for our children it has to be diverse and fair and everybody has to earn a living wage. If we do not invest in a diverse economic infrastructure then we’ll be stuck with the same destructive patterns we’ve had for decades.

Are you inspired by the so-called “Blue Wave” of Democratic electoral victories in Virginia and Alabama?

The people I’ve met through my path in activism, we’re trying to bring real people into a leadership role because we are real Americans and know the true pain of having to worry about our children. And there’s no force like a mother trying to protect her child. That’s what we need in leadership: women. We’re going to make the right decisions for everyone.

You’re very critical of the Democratic Party establishment. Why did you decide to run as a Democrat instead of as a Third Party or independent candidate?

I want to bring democracy back to the Democratic Party. Like the miners of Blair Mountain, Joe Hill and Mother Jones. We have fought so many labor struggles and won. This nation and state deserve true democracy.

I am a West Virginian. We all struggle and are going to fight like hell. I believe a new West Virginia is being born.