In Response to ICE Raids and Family Separation, Immigrant Communities Are Fighting Back 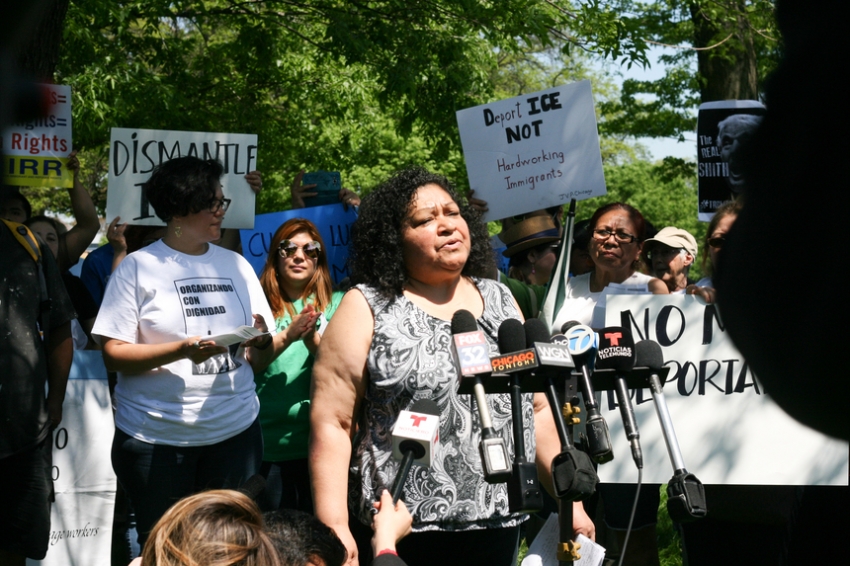 Rosi Carrasco, a volunteer organizer with Organized Communities Against Deportation, addresses the recent ICE raids that have targeted immigrant families in the Chicago area. (Photo by Anay Sanchez/Latino Union)

Since May 19, a hotline dedicated to assisting families threatened by Immigration and Customs Enforcement (ICE) has been ringing nonstop. That same day is when ICE agents across the Chicagoland area began a widespread sweep, including at a worksite near a Home Depot, where laborers go to find work. According to immigrants’ rights organizers, at least 80 people have been detained since the sweep began, and likely many more.

On Thursday, a group of around 75 protesters gathered on Chicago’s Southwest side at the intersection of 45th St. and Western Ave., across the street from the worksite. Organizers, as well as several workers who were at the job site when ICE arrived last weekend, spoke to the gathered crowd. With ICE threatening their livelihoods and their communities, those who spoke gave urgency to the ongoing fight to end police intimidation and for immigrants to earn a living and to live without fear.

“What we want is respect, and to keep this as a job site,” said Enrique, an undocumented worker who withheld his last name for fear of retaliation, and who has come to the same worksite for the past 12 years. “If you're undocumented it's not that easy to find work anywhere else.”

Organizers believe that the raid at 45th St. and Western Ave. was part of an ongoing sting operation led by ICE to intimidate immigrant communities, targeting Latino neighborhoods in Chicago as well as the nearby suburbs of Cicero and Joliet. In addition to worksites, ICE has also entered family homes without warrants. According to organizers, one family even had a child's party violently interrupted by ICE agents.

In targeting a day labor site, ICE officials are also threatening the livelihoods of people who may depend on an undocumented family member to find such employment in order to support them. Immigrant and labor activists have frequently rallied to protect undocumented people's right to work, including a May Day protest this year that ended at an ICE office in downtown Chicago. Don Villar, the secretary-treasurer of the Chicago Federation of Labor, a union which represents over 300 separate unions in the Chicago area, argued that the fight for immigrant's rights contributes directly to the ongoing struggle for all worker's rights.

The raid comes on the heels of a larger campaign being waged by the Trump administration against immigrant rights. On Thursday, just before the protest, President Trump suggested in an interview that he believes undocumented immigrants don't deserve a legal hearing on their immigration status—an unconstitutional policy that's at odds with his own Justice Department. Attorney General Jeff Sessions, meanwhile, has proposed increasing the number of immigration judges, hoping to hasten the deportation of even more undocumented people. There are currently more than 700,000 pending immigration cases in the United States, leaving countless people in limbo for years as they await a trial.

In an attempt to speed up deportations, Trump has directed the Justice Department to push immigration judges to reach a yearly quota for deportation cases. The administration also recently announced that it will preemptively separate parents from their children if they're detained while crossing into the United States, a policy that many have condemned as inhumane and unnecessary.

In Chicago, where Mayor Rahm Emanuel's administration recently won a court case against the Trump administration over threats to withhold federal grants to sanctuary cities, there's still plenty of evidence that more needs to be done to protect undocumented communities. Organizers are particularly worried about the city's gang database, which has erroneously listed many Chicagoans as involved in criminal activity. By providing ICE access to the list of more than 128,000 names, critics say the Chicago Police Department is directly threatening the livelihoods of undocumented residents, and the move has sparked two lawsuits against the city

“We have encountered people who have been put in the database as an excuse so CPD can collaborate with ICE and take them into custody,” said Analia Rodriguez, executive director of the Latino Union of Chicago, which represents domestic and day laborers. “We're afraid that because these guys are vulnerable workers in very public spaces, they're a very easy target for criminalization and deportation.”

Organizers believe that ICE's ultimate purpose is to disrupt families and communities, making resistance to future raids less possible. Closing the gathering with chants of “ICE! Escucha! Estamos en la lucha!” (“ICE! Listen! We are in the fight!”), protesters showed no sign of giving up fighting anytime soon, knowing that the wellbeing of their communities depends on it.

“We need to show ICE and this administration that our communities are organizing,” said Rosi Carrasco, a volunteer with Organized Communities Against Deportation, a group of self-organized immigrants fighting deportations. “ICE is the agency whose only job is to separate families, so we have to find a way to protect our rights, to resist, to organize and to fight.”

If you or a family or community member has been targeted by ICE, or observe ICE activity in the Chicago area, please call 1-855-HELP-MY-FAMILY for assistance.