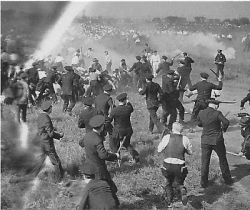 Police fire on a crowd of strikers during the Republic Steel strike on May 30, 1937, in Chicago. Ten people were killed in the massacre.   (Photo via Arkansas AFL-CIO )

Given the distance of most reporters and editors from the lives of working people—and the fact that labor reporters have become virtually extinct in America—it is easy to see why reporters and pundits would find such falsehoods credible.

But the Memorial Day Massacre on May 30, 1937 in southeast Chicago—the 74th anniversary of which was yesterday—should remind us that even when 10 workers get shot in the back and killed, the media’s natural inclination is to side with corporations and the police.

On Memorial Day 1937, Chicago policemen fired upon a crowd of 1,000 striking United Steelworkers and their wives and children near Republic Steel on the city’s southeast side, killing 10 workers—each one shot in the back or side, indicating that they were fleeing the police rather than charging them.

Another 30 workers were shot and wounded, all but four struck in the back or side. Ten of the strikers and supporters were permanently crippled by bullet wounds or relentless thrashings inflicted by Chicago Police billy-clubs.

But initial reaction was anything but sympathetic to the strikers. Predictably, Colonel Robert McCormick’s reactionary Chicago Tribune portrayed the event as an assault by communist rioters who forced police officers to defend themselves. Other major media interpreted photos and newsreel footage as confirming the scenario of a hysterical mob attack on the police. A coroner’s jury ruled the shootings “justifiable homicide.”

Howefer, the bitterest pill came from President Franklin Delano Roosevelt, who was beseeched by labor leaders to denounce the slaughter. Instead, Roosevelt—in whom desperate workers had invested so many hopes—reportedly responded icily: "The majority of people are saying just one thing, 'A plague on both your houses.' "

The conventional “framing”—the structure and narrative—of the event by corporate leaders, the mainstream media, and leading politicians all depicted the workers as uncontrollable rioters who went far beyond the assertion of their rights under the National Labor Relations Act.

Some elected Democrats like Roosevelt suggested that the police were unnecessarily brutal, but implied that the strikers had provoked a violent response.

EFFORT TO GET OUT THE TRUTH

But the reality of the Memorial Day massacre slowly began to be revealed to the public, like a gradually developing photograph, thanks to the dogged and diligent efforts of the Steelworkers Organizing Committee, St. Louis Dispatch reporter Paul Anderson, and the audacity of Wisconsin Sen. Robert LaFollette, Jr., chair of the Civil Liberties Committee.

The result was a relatively rare instance of labor turning around initially-hostile news coverage and successfully re-framing the killings as the result of the particularly avaricious and aggressive Republic Steel, led by president Tom Girdler.

Initial coverage failed to depict the bellicose stance of Girdler and other top executives. Republic Steel was rapidly advancing out of the Depression, with its profits climbing. But rather than share the wealth with the workers who produced it, Girdler prepared literally for class war. “Sure, we’ve got guns!," he replied jubilantly when asked about the corporation’s response of buying munitions instead of recognizing workers’ demands for their union rights, as reported in the class labor history by Morais and Boyer, "Labor's Untold Story."

As Prof. Carol Quirke has noted, the labor movement showed a newfound sophistication in using the mass media to document class violence against workers and to win over public support:

[N]ewsreel footage and news photographs [now understood] to demonstrate police responsibility for the violence first appeared in metropolitan dailies and nationally circulating magazines in stories representing strikers as a mob that sought to storm the Republic Steel plant, leaving police no option but to shoot.

[The Memorial Day Massacre illustrates] how labor and its allies engineered a re-reading of news imagery first employed by Chicago officials and Republic Steel executives to condemn workers' activism. This re-reading took place at Chicago rallies, in Washington congressional rooms, and ultimately, within the newly nationalized, photographic media itself.

Understanding how labor reversed the interpretation of these images before the American public suggests that labor's newfound political might included a sophisticated ability to renegotiate its visual representation, and to capitalize on the growing salience of news photography to restrict corporate and state violence against unions.

One critical piece of evidence was a Paramount newsreel of the event shot by a photographer who expected a routine, peaceful rally. Instead, he wound up filming a barbaric onslaught that was described by reporter Paul Anderson of St. Louis Post-Dispatch in these unforgettable terms:

Those of us who saw it were shocked and amazed by the scenes showing scores of uniformed police firing their revolvers pointblank into a dense crowd of men, women and children, and then pursuing and clubbing the survivors unmercifully as they made frantic efforts to escape.

The impression produced by the fearful scenes was heightened by the sound record which accompanies the picture, reproducing the roar of the police fire and the screams of the victims

A vivid close-up shows the head of the parade being halted at the police line. The flag bearers are in front. Behind them the placards are massed. They bear such devices as “Come on out, Help win the strike, Republic vs. the People, and CIO …

Then suddenly, without warning, there is a terrific roar of pistol shots, and the men in the front ranks of the marchers go down like grass before the scythe. The camera catches approximately a dozen falling simultaneously in a heap. The massive sustained roar of the pistol shots last perhaps two to three seconds.

In a manner which is appallingly business-like, groups of policemen close in on isolated individuals. They go to work on them with their clubs. In several instances two to four policemen were seen beating on one man.

Even while numerous newspapers were reflecting the Republic Steel/Chicago Police Dept. version of the events, a Paramount executive refused to release the tape, stating he was blocking it “on the grounds that such an unrelieved record of blood and brutality was liable to touch off more riots.” Yet at the same time, the same footage was being viewed in British cinemas. (The newsreel in video version is still hard to obtain; try this link).

Sen. LaFollette finally obtained the newsreel so that his Senate committee could view it. The committee’s private viewing set the stage for a scorching report that excoriated Republic Steel’s decision to prepare for war rather than recognize workers’ rights. It also faulted the Chicago Police Department for acting as an auxiliary of Republic’s goon squad.

The Republic Steel Corporation has a uniformed police force of nearly 400 men whom it has equipped not only with revolvers, rifles and shotguns, but also with more tear and sickening gas and gas equipment than has been purchased…by any law-enforcement body, local, State or Federal in the country. It has loosed its guards, thus armed to shoot down citizens on the streets and highways.

The LaFollette report created sensational headlines and widespread condemnations of Republic Steel, and a vast tide of public sympathy for the union movement.

The Memorial Day Massacre reminds us of the inhuman lengths that corporate CEOs—increasingly cast in the mold of Girdler or former GE head Jack Welch—will go to avoid parting with one cent or scintilla of control over their workers.

But perhaps the most crucial lesson to draw from the awful massacre 74 years ago is that labor must challenge the way that its cause is presented in the media on a daily basis. The increasing polarization of income is almost entirely ignored by major media; globalization and “free trade” are portrayed as the only view that “enlightened” people could possibly hold, and labor unions are commonly portrayed as once-useful institutions that have become dinosaurs.

Essentially, the major media remain almost as remote from the lives of working people as Colonel McCormick's Tribune was from the reality of the Republic Steel strike and the ensuing massacre.