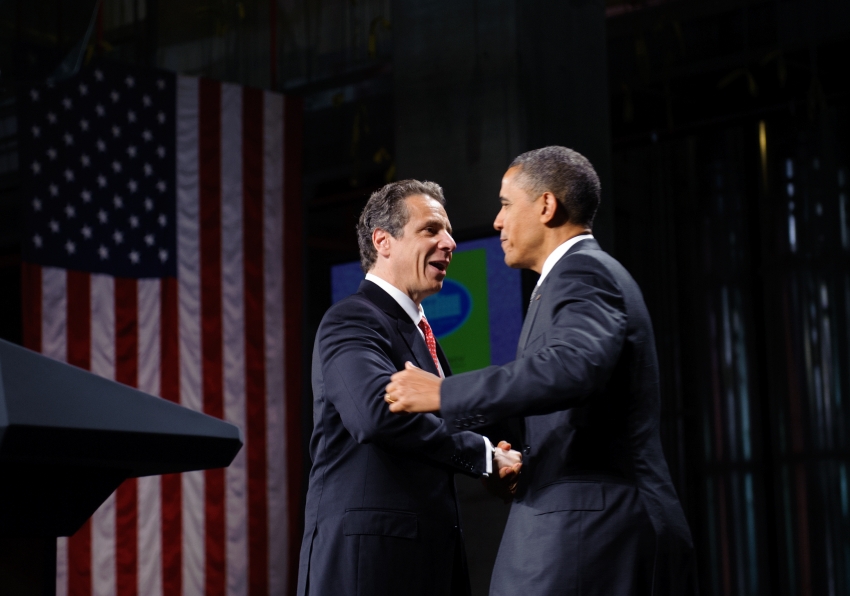 The Neoliberal Plan for Higher Education

Students from New York’s SUNY and CUNY systems played a leading role in organizing last month’s Student Power Convergence in Columbus, Ohio, which brought together students and advocates from across the continent. Now, New Yorkers are at the forefront of the Northeast Regional Student Power Convergence slated for next spring. Unfortunately, if student activists are looking for a sympathetic audience among policymakers, they’ll find deaf ears from two very powerful men.

In May, President Obama visited SUNY’s College of Nanoscale Science and Engineering (CNSE) for a bro-hug with Governor Andrew Cuomo and a speech praising Albany’s silicon-driven economic agenda. The president’s stamp on Cuomo’s development plan, which calls for public-private research partnerships centered at New York’s university hubs, earned the governor early points for a potential 2016 White House run. In exchange, Obama could tout New York as a state-level version of his ideal economic agenda while jabbing Congress for moving more slowly than Cuomo.

“I want what’s happening at Albany to happen all across the country,” he said, “places like Cleveland, and Pittsburgh, and Raleigh.”

The president can be forgiven for offhandedly gesturing to a few swing states. His lionization of New York, on the other hand, should raise red flags for students across the country. Despite trumpeting the need to “create jobs” and give everyone “the best chance to get the right training and education,” Obama brushed over the darker reality of Cuomo’s vision—the patent destruction of affordable, comprehensive higher education.

Under the NYSUNY 2020 Challenge Grant Program Act, passed by the legislature last year, universities must submit programming and accounting plans so that the SUNY central administration can measure their performance in areas such as graduation rates and meeting work-force needs, instead of strictly on the basis of enrollment. Major needs, according to SUNY Chancellor Nancy Zimpher, include nursing, nanotechnology, and information technology. Academic departments are charged with developing plans to bolster “support for instruction and research”—language that, according to the “Entrepreneurial Century” plank of SUNY’s strategic plan, effectively means pulling in greater external funding. In the end, universities are forced to compete for state funding based on how well they align themselves with the 2020 model.

According to a notice from the University of Albany administration on the heels of NYSUNY 2020’s passage, new faculty and instructional hires funded by the initiative must be tethered to external sources of funding or increased departmental enrollment. These hiring factors don’t necessarily coincide, as English professor Bret Benjamin says, with hiring plans “as they’ve emerged from organic strengths or needs of departments.” This is not mere administrative posturing. Under NYSUNY 2020, there will be new faculty. As part of its “Impact Plan,” UAlbany alone could get 1,350 new students and 187 new faculty over the next five years.

New funding for faculty and students does not scream austerity, but under the neoliberal mandate NYSUNY 2020, it comes with casualties. Arts, humanities, and social science departments are, by and large, less marketable as workforce feeders and more dependent on university funding. Grad students get to swallow an extra pill. With cuts to unionized departments and an influx of students dependent on external funding, the grad student union—which has gone three years without a new contract—is threatened with work speed-up and stagnant poverty wages.

For undergrads, Cuomo’s cocktail is even more poisonous. A key provision of NYSUNY 2020 is “rational tuition,” which replaces erratic spikes from state legislators with a steady yearly increase amounting to upwards of 30% from 2011-2016. With tuition and fees already among the highest of any state proportionate to family income, many students face delays in loan disbursement or funding from New York’s Tuition Assistance Program. Worse, the Tuition Assistance Program and the Educational Opportunity Program, which advocates of the tuition plan tend to hand-wave as stopgaps against unaffordability, are chronically underfunded by the state legislature. NYSUNY 2020 does nothing to address this.

Since 1990, the overall percentage of SUNY’s funding coming from the state has plummeted from 75% to 23%. While Chancellor Zimpher does promote funding for the SUNY system as requested by fellow administrators, this is a far cry from restoring what has been lost in recent years.

Students who can afford to attend SUNY schools won’t be challenged to think as critically or holistically. Last year, UAlbany deactivated its French, Russian, Italian, Classics, and Theater programs. This year, under pressure from the SUNY administration to reduce its general education requirements, the school eliminated its “U.S. Pluralism and Diversity,” “Regions Beyond Europe,” and “Global and Cross-Cultural Studies” credits. Meanwhile, Stony Brook has combined its music, theater, and studio art programs into one; Purchase no longer hosts a dramatic writing program or alternative women’s health services; and Binghamton has maneuvered to eliminate “Philosophy, Interpretation, and Culture,” a unique graduate philosophy program centering on nonwestern philosophy.

“What we’re facing is a threat to diversity and accessibility,” says Maggie Ward, a recent Binghamton graduate, “in higher education as well as academics.”

Meanwhile, investment in sci-tech business partnership rolls on. Zimpher’s State of the University address this year, “Getting Down to Business,” is a legacy of Rethinking SUNY—a Clinton-era manifesto calling for greater management autonomy and faculty research output—and an alphabet soup of public-private research centers founded since then. Last year’s $100 million cut to the system overall came alongside a $400 million infusion to CNSE, which houses fewer than 200 undergrads.

Cuomo’s interests are squarely aligned in this direction. The man he appointed to lead the SUNY board of trustees, H. Carl McCall, is part of a group of CEOs called the “Committee to Save New York,” which spent $10 million last year lobbying in support of the governor’s agenda. The committee easily outspent every other lobbying group in the state.

In response to SUNY’s restructuring, the SUNY Student Association (SSA), an elected body of students with a single collective vote on the board of trustees, has been largely missing in action. Indeed, the SSA has spoken in favor of rational tuition and tends to follow administrative suit. While it was founded in 1973 as a formal body for student activists to liaison with the administration, the SSA now feeds members into positions as legislative and administrative aides.

To fill the void, students organized last year into New York Students Rising. Under the banner of “Save Our SUNY,” students held massive protests at the state Capitol in the spring of 2011 and two large organizing retreats the following summer. On October 5, 2011, 14 SUNY schools had walkouts or direct actions. The Occupied Wall Street Journal posted the plans, and NYSR had inadvertently given birth to the national Occupy solidarity network, “Occupy Colleges.”

Now, NYSR is organizing in hand with Students United for a Free CUNY, high school students and parents from Student Activists United and Occupy the Department of Education, and progressive faculty from SUNY and CUNY. On March 5, 33 students were arrested for a sit-in at Cuomo’s office. In May, students massed for a “Get Ready to Graduate” action in Manhattan.

This fall, NYSR will be fighting alongside faculty and campus employees around research foundation transparency—currently, state research foundations aren’t subject to Freedom of Information law, despite connections with the gas industry and reports of corrupt leadership—and a fair contract for grad students. These campaigns coincide with several broader demands: a repeal of NYSUNY 2020, the restoration of funding for SUNY and CUNY, a tuition freeze, and a voice in higher ed policy.

“We’re trying to change the conversation around higher education, trying to change the manner in which the two systems are run,” says Sean Collins, a political science major at UAlbany. “How could you change our general education requirements without even conferring with us? I’m paying for my access to that curriculum, I should have a say in what it looks like.”