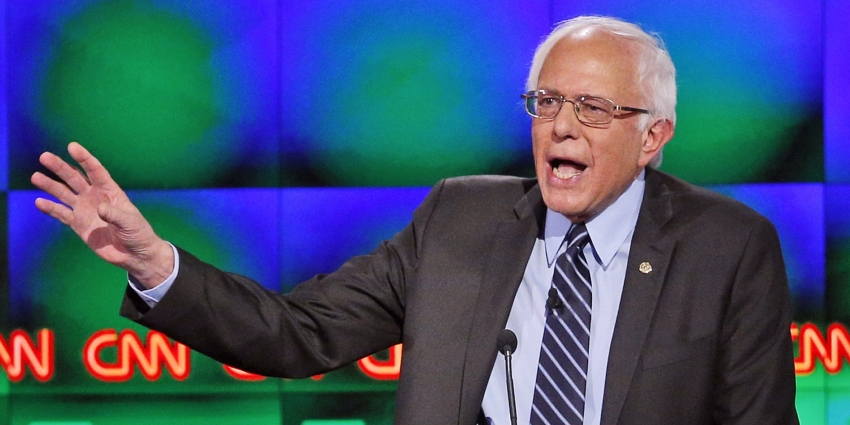 Facing rampant inequality and poverty, a substantive debate on socialism versus capitalism is exactly what the United States needs right now.

As he continues to talk about the benefits of his brand of democratic socialism in contrast to our current capitalist system characterized by massive inequality and poverty, he will have a rapt—and activated—audience.

Tuesday night’s Democratic debate was largely devoid of the personal swipes and party-line litmus tests that have dominated those on the Republican side. And there was no candidate on stage commanding the star-power of savvy bigot Donald Trump.

One test that was laid out early in the debate, however, has real implications for the future of the Democratic Party, and of the role of the Left in U.S. electoral politics: the question of identifying as a socialist or capitalist.

That a U.S. presidential debate in 2015 would feature any substantive discussion on the merits of socialism versus capitalism is itself astounding, especially when compared to the language of presidential contests in 2008 and 2012, when the socialist label was frequently hurled at Barack Obama as an insult meant to summon images of gulags and work camps. Since at least the Cold War era, a subscription to capitalism has been taken as a given for both major political parties.

But here we are, with Bernie Sanders and Hillary Clinton digging into the virtues of the disparate economic and social models on national television, watched by some 15.3 million viewers.

Debate host Anderson Cooper began his questioning of Bernie Sanders by asking: “How can any kind of socialist win a general election in the United States?” Sanders, the self-proclaimed democratic socialist, answered by making the case for a more egalitarian society where not just income but social services and healthcare are provided democratically, regardless of stature or position:

What democratic socialism is about is saying that it is immoral and wrong that the top one-tenth of 1 percent in this country own almost as much wealth as the bottom 90 percent. That it is wrong, today, in a rigged economy, that 57 percent of all new income is going to the top 1 percent.

Those are some of the principles that I believe in, and I think we should look to countries like Denmark, like Sweden and Norway, and learn from what they have accomplished for their working people.

When Sanders was asked if he considers himself a capitalist, he responded: “Do I consider myself part of the casino capitalist process by which so few have so much and so many have so little, by which Wall Street's greed and recklessness wrecked this economy? No, I don’t. I believe in a society where all people do well. Not just a handful of billionaires.” (This was a particularly ironic moment of the debate: Sanders was lambasting casino capitalism while literally debating inside a Las Vegas casino.)

Cooper then opened the question to the rest of the candidates, asking “Is there anybody else on the stage who is not a capitalist?,” leading Clinton to fire back in defense:

When I think about capitalism, I think about all the small businesses that were started because we have the opportunity and the freedom in our country for people to do that and to make a good living for themselves and their families.

And I don't think we should confuse what we have to do every so often in America, which is save capitalism from itself. And I think what Senator Sanders is saying certainly makes sense in the terms of the inequality that we have.

But we are not Denmark. I love Denmark. We are the United States of America. And it's our job to rein in the excesses of capitalism so that it doesn't run amok and doesn't cause the kind of inequities we're seeing in our economic system.

This defense of capitalism by the leading candidate for the Democratic presidential nomination was anything but full-throated. In recognizing that the system was so flawed that it must be “saved from itself,” she sounded more like former Greek finance minister (and self-described “erratic Marxist”) Yanis Varoufakis than a traditional mainstream American politician.

As Elizabeth Bruenig points out at the New Republic, Sanders and Clinton have fundamentally different visions of how our economy should be structured: Sanders’ is an egalitarian “pro-equality platform” advocating a more expansive welfare state, while Clinton’s is a Horatio-Alger style “opportunity-focused approach” emphasizing increasing social-mobility.

This divergence was on full display last night. When asked if Clinton agreed with Sanders that Social Security should be expanded, for example, she refused to give a definitive “yes,” instead advocating defending and “enhancing” the government-run welfare program, rather than across-the-board expansion as Sanders proposes.

While this discussion remains a far cry from the Democratic Party distancing itself from its embrace of capitalism (something that will almost assuredly never happen), the debate—and level of grassroots support behind Sanders—show that this reckoning could have serious effects on how the party positions itself on economic issues in the future.

And the inclusion in the Sanders campaign of leftists generally critical of the electoral political process means the pressure to continue discussing the benefits of socialism and drawbacks of capitalism will likely continue within the campaign as well. The many activists and organizers who are working in the Sanders camp with a robust critique of corporate capitalism will continue to inform how the campaign constructs messaging to voters.

And even if Sanders does not win the nomination or presidency, the political education happening across the country through his campaign around issues of gross economic inequality, climate devastation and social injustice means there will almost certainly be more interrogation of capitalism than at any time in recent memory.

Sanders is the first candidate to bring in one million donations this early in a presidential race. He is leading in multiple polls in the early primary voting states of Iowa and New Hampshire. And, as pundits, donors and attendees to his massive rallies will tell you, he is the Democratic candidate with the most energy right now.

As he continues to talk about the benefits of his brand of democratic socialism in contrast to our current capitalist system characterized by massive inequality and poverty, he will have a rapt—and activated—audience.

Hillary Clinton remains the front-runner, and is a defender of capitalism. As her recently taken positions against the Trans-Pacific Partnership and Keystone XL pipeline show, she can be moved. But if the kind of commonsense discussion about democratic socialism that Sanders helped lead last night continues to catch on, the Democratic Party itself could be forced to move closer to Bernie.