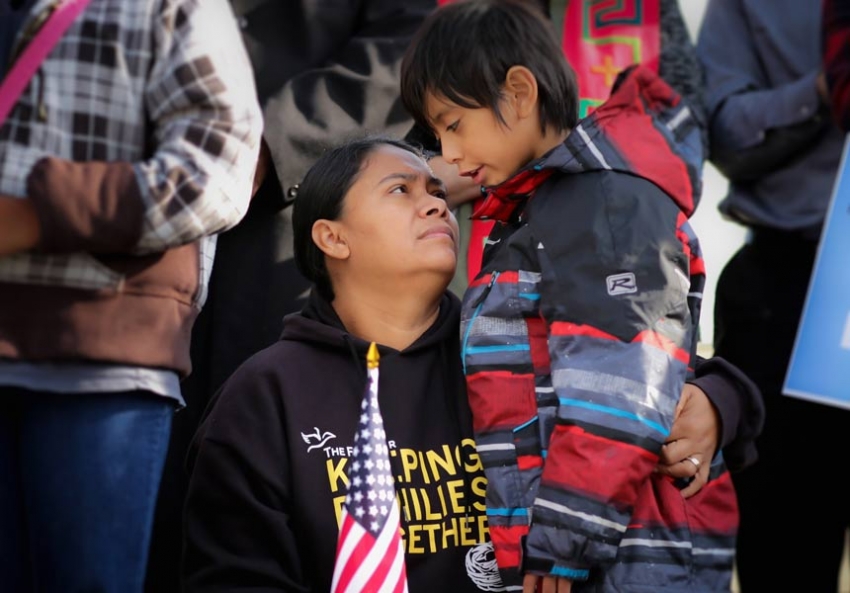 Rosario Reyes and her son Victor participate in a prayer vigil and rally in front of the Supreme Court on Dec. 11, 2015. (Chip Somodevilla / Getty Images)

The relief that never happened and the raids that did.

“My baby was crying for me,” she says. “Just leaving [them] like that, not knowing what would happen, not knowing if I would ever see them again.”

Rosario Reyes, 38, an undocumented immigrant from El Salvador, had been standing on the steps of the U.S. Supreme Court with her American-born, 7-year-old son Victor since 4 a.m. in the pouring rain. They were drenched. At around 10:30 a.m., the skies cleared and the Court’s nine-word decision came down: “The judgment is affirmed by an equally divided court.” When she heard the words, Reyes wept.

A year and a half earlier, President Obama promised Reyes and millions of other unauthorized immigrants, “If you meet the criteria, you can come out of the shadows.” The June 23 decision halted the two programs meant to realize that promise: Deferred Action for Parents of Americans (DAPA) and an expansion of the 2012 Deferred Action for Childhood Arrivals (DACA+).

DAPA applied to parents who had arrived prior to 2010 and whose children were U.S. citizens or lawful permanent residents. They could apply for temporary relief from deportation and a three-year work permit. According to the Migration Policy Institute, as many as 3.6 million unauthorized immigrants would be eligible.

Obama also expanded DACA, a 2012 policy that let children who entered the U.S. before June 2007 apply for a two-year relief from deportation and work permit. Under the expansion, expected to benefit roughly 290,000 children, the new cut-off would be January 2010 and the relief period would increase to three years.

Obama had turned to these executive actions in frustration. He’d pledged to seek comprehensive reform of what he termed a “broken immigration system” during his second term. But when a surge of unaccompanied minors began arriving at the U.S.-Mexico border in 2014, House Republicans accused Obama of lax border enforcement and repeatedly blocked an immigration bill passed by the Senate. In response, in November 2014, Obama announced DAPA and DACA+.

The actions never went into effect. Texas and 25 other states immediately challenged them, and the Fifth Circuit Court of Appeals—whose ruling the Supreme Court affirmed—held that Obama had overreached.

Now, Reyes and others hoping to file for DAPA protection must wait for the outcome of a Hail Mary: On July 18, the Department of Justice filed a petition for the Supreme Court to rehear the case when it has nine justices. In the unusual event that the court takes up the petition, the process could take another two years or more.

Victor and his brother Ricardo, 18, who live with their mother in Maryland, now fear for her. “They pray all day,” Reyes says, and are “always crying.”

“They ask me, ‘What are we going to do if you are not with us and you get deported? What will happen to us?’ ”

Of felons and families

Obama’s role in this story is not as straightforward as it sounds. He is not simply a champion of immigrant rights thwarted by Congress and the courts.

Obama’s use of executive authority was selective: While he attempted to help some immigrant mothers and children, he aggressively pursued others.

The president said his plan would prioritize “felons, not families. Criminals, not children. Gang members, not a mom who’s working hard to provide for her kids.” But the 2014 policy makes mothers and children who arrived after January 2014 a priority for deportation. While DAPA and DACA+ were enjoined, the deportations went on.

In January of this year, and again in May and June, Immigration and Customs Enforcement (ICE) ramped up raids targeting recently arrived Central American women and children. Immigrants were picked up in churches and schools.

Around 7:30 a.m. on June 7, Leticia (who preferred to give only her first name) received a phone call at work from her husband. Four ICE agents had apprehended her daughter, Yosselyn, at the bus stop.

Yosselyn, 19, had come from El Salvador two years earlier on foot. No longer a minor, she is ineligible for DACA or DACA+ because she arrived after 2010.

Leticia raced home, but by the time she arrived, her daughter was gone; Yosselyn had been handcuffed, taken into custody and placed in a Georgia detention center. She is currently in removal proceedings.

Many see this contradictory approach to raids and relief as the crux of Obama’s immigration legacy. “Obama hides under this blanket of his executive action,” says Luba Cortés, an immigrant youth organizer at Make the Road New York whose mother would have been eligible for DAPA. “How can you be pushing this executive action and [at the same time] give the green light on raids?”

Jacqui Moreno arrived in Texas from Kenya on a student visa 16 years ago. She overstayed her visa after she completed her nursing degree, fearing violence in Kenya that had targeted her family. Today, she has four American children and a naturalized husband from Belize, but has been unable to obtain legal status. She hoped DAPA would help.

Moreno had never had an encounter with law enforcement until the morning of Oct. 8, 2015, when an ICE agent and two officials dressed in civilian clothing swarmed her home in Plano, Texas, as she was taking her two eldest children to school. In the commotion, the two older children were able to leave for school with their father, but her two youngest, ages 2 and 5, stayed behind with an uncle. They looked on as Moreno was handcuffed and taken away.

“My baby was crying for me,” she says. “Just leaving [them] like that, not knowing what would happen, not knowing if I would ever see them again” left her frozen. She was placed in a cell and later that day released on bond, but is now in removal proceedings. When she heard the Court’s decision on DAPA, which she had hoped might provide her a way out, she was in tears. “I don’t know what route to take after that,” she says.

Isabel Aguilar is another immigrant mother with an uncertain fate.

After a paramilitary group in Honduras killed her nephew in 2003, they threatened the family: “Don’t investigate this. … You could be next.” Fearing for her safety, Isabel packed up her life in Honduras, where she was an attorney, and fled to the United States with her husband and 1-year-old. She thought things would calm down in Honduras within a year. But the situation only worsened. That was 13 years ago.

When Aguilar’s visa expired in 2013, she was told by legal counsel that it was too late for her to make an asylum claim. So she stayed without papers.

She has two U.S.-born children and would have been eligible for DAPA. Instead, she fears her family may share the fate of several others from her community of Owings Mills, a suburb of Baltimore. In at least three cases, she says, children were left without one or more parents after ICE detained or deported them.

Some children of deported parents can stay with extended family; others have no one. A yearlong investigation published in 2011 by the Applied Research Center found that thousands of children whose parents were detained or deported ended up in foster homes.

“Children are being left behind,” Aguilar says. “This is a president who is supposed to support us.”

Nor is the immigration rhetoric in the upcoming presidential election giving her much confidence. Her 14-year-old son’s classmates tell him, “You should be ready with your luggage when Donald Trump arrives. … You should be ready to leave for Honduras.”

“I am afraid,” she says. “My children have Latino faces.”

In the meantime, even under a supposedly immigrant-friendly Democratic president, families remain torn apart.

When Rosario Reyes fled gang violence in El Salvador 12 years ago, she left behind her younger son, José Ramón, unsure whether she could travel safely with a 3-year-old.

She has not seen him since, but she knows him well. Every afternoon, she checks his homework over Skype, and they chat frequently through WhatsApp. “I will see you soon,” she had been telling him before the Supreme Court decision.

Reyes was planning to sponsor José Ramón through the Central American Minors Refugee Program, which provides safe passage to the U.S. border. That program, however, requires Reyes to be lawfully present in the United States. After the Supreme Court’s deadlock dashed her plans to apply for DAPA relief, she sees no way to reunite her family anytime soon.

In These Times was able to connect with these families in part with the help of the United We Dream MigraWatch hotline and CASA. ​

Annie Hylton is a former lawyer focusing on situations of conflict. She is currently a fellow at the Global Migration Project at Columbia University's Graduate School of Journalism. She covers gender and migration, national security, and foreign affairs.