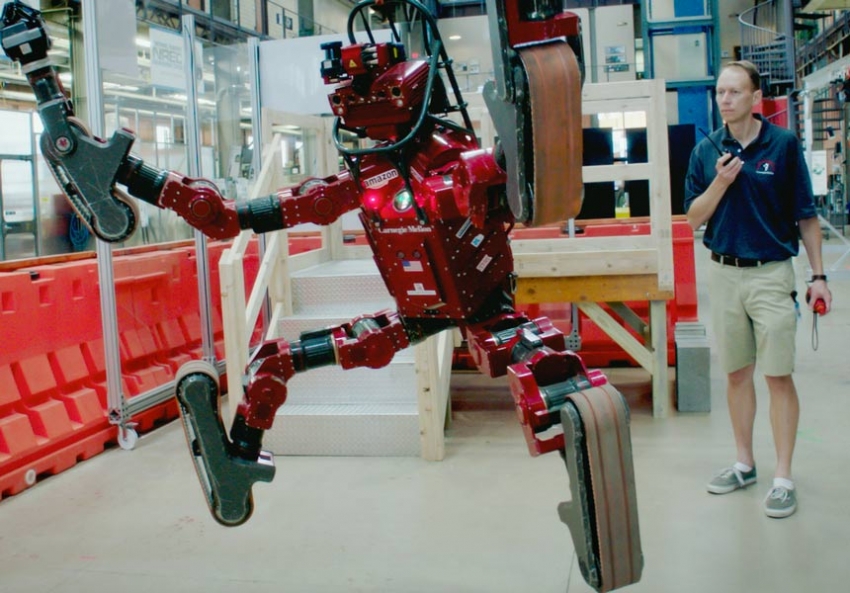 Werner Herzog Wants To Know: “Does the Internet Dream?”

In Lo and Behold: Reveries of the Connected World, the septuagenarian filmmaker explores online gaming, self-driving cars and soccer-playing robots.

Herzog isn’t implicitly asking the impossible: Should we roll it all back? Rather, he asks: How’d we get here? How’d we become so helplessly reliant on an ad-hoc technology that gets exponentially larger and more chaotic every day?

We’re lucky to have him—Werner Herzog, giant of the 1960s-1980s New German Cinema movement, reborn in the new millennium as an Angeleno and our era’s most provocative documentarian. For Herzogians, the man’s astounded take on everything he sees—including American folly and self-destruction—is his films’ real subject, whether he’s cruising above the Kuwaiti oil fires (Lessons of Darkness), interviewing death-row murderers (Into the Abyss), visiting the only human encampment in Antarctica (Encounters at the End of the World), or capturing rarely seen paleolithic cave paintings in 3-D (Cave of Forgotten Dreams). His new film, Lo and Behold: Reveries of the Connected World, is a new order of business, an awed tour of human life shaped by the internet, from a filmmaker whose passions have always sought out the primordial and pre-technological.

A connoisseur of alien landscapes, Herzog is finally completely out of his element here, exploring techno-hubs and “connectedness” stats in a virtual world where almost nothing filmable happens. The film is nearly all interviews (internet-science pioneers, Carnegie Mellon robot researchers, Elon Musk, recovering internet addicts, etc.), with Herzog off-camera prodding with questions and exuding an unmistakable sense of old-fogey freak-out.

Not that the realities at our keyboard-zooming fingertips aren’t alarming, when you take a step back. Herzog starts at the internet’s stone-knives-and-bearskins origin, on the UCLA campus (where the hallways are “repulsive”), and quickly gets zonked by the accelerating scale of change since. According to Herzog, if you were to download a single day’s internet data flow onto CDs, the stack of them would reach to Mars and back. Online gaming is such a time-sucking force that it can be used to crowd-source real scientific innovation (like discovering a retrovirus enzyme structure via a game called Foldit), and at the same time, Herzog notes, “it is not uncommon” for South Korean gamers to wear diapers, so as to minimize interruptions.

From there, he smells trouble everywhere technology sprawls, from the dangers poised by self-driving cars to a family haunted by their daughter’s car-crash photo becoming a global meme, to communities of radiation-averse outcasts living off the matrix in the no-cell-phone zone created around a radio telescope.

Interviewing the inventor of a rather incredible autonomous soccer-playing robot, Herzog asks, “Do you love it?” Only Herzog would wonder how love will be folded into our automated future. He also seeks out portents of doom: the East Coast blackout caused by Superstorm Sandy gives him pause, as does the fact that something as simple as a large solar flare, for which we are overdue, would wipe out all electronic activity worldwide in a cataclysm one scientist characterizes as “unimaginably bad.”

U.S. cybersecurity experts and a master hacker are grilled as well, always for the purposes of backlighting how fragile the system is. Herzog draws no explicit conclusions, but his position is clearly Ludditic—and apparently, with good reason. No expert, Herzog isn’t implicitly asking the impossible: Should we roll it all back? Rather, he asks: How’d we get here? How’d we become so helplessly reliant on an ad-hoc technology that gets exponentially larger and more chaotic every day?

There’s deep digging to do here, but Herzog, a poet more than a philosopher, skims the surface. He’s looking for his own Herzogian truth, asking a plethora of big brains the confounding question, “Does the internet dream?” It’s unanswerable, of course, the kind of question Herzog prefers, but it begs at a quasi-sci-fi idea that bears scrutiny: At what point does the unquantifiable aggregate of internet data and analysis culminate into an intelligence all its own? And then what’ll it do?

Perhaps, with a few A.I. classes under his belt, Herzog could attack that idea and go further. I can see a ten-part PBS series, far more uneasy and compelling than any Neil deGrasse Tyson soft soap, in which Herzog goes looking for the surreal secrets of darknets and the Deep Web, massively multiplayer online (MMO) game “gold farming,” machine ethics, “transhumanity,” and so on. As it is, he may be the closest we have to a Virgil, insisting on humanness and skeptically reconnoitering the darkness.

As a Domestic Violence Survivor, I Don’t Always Feel Safer at Home