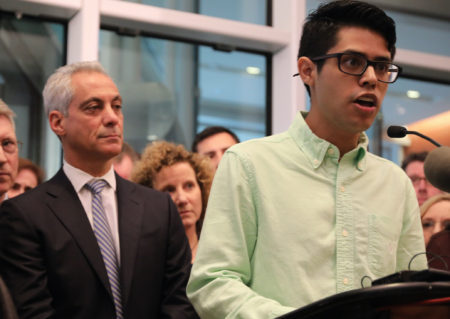 Emanuel and Gutiérrez organized a press conference Monday to reassure immigrants in the city of Chicago that they will continue to be welcomed. But not everyone was convinced. (Vivelohoy)

Luis Gomez publicly blasted Chicago Mayor Rahm Emanuel and Rep. Luis Gutiérrez for failing to do enough to protect all immigrants facing the threat of a Trump presidency—and for supporting Hillary Clinton and “stale neoliberal policies” over Bernie Sanders’ campaign.

"When I heard that Trump was planning to incarcerate and deport these people, I knew I had to do something. These people that I’m talking about, these are people in our communities, these are families, these are our friends. It’s important for me to speak for these people because if they deport everyone that I know and love, then there’s no point in saving me."

There’s no waiting for the toxic effects of Donald Trump’s election to take hold on the groups he’s threatened—they’re already here: The country has seen a 250 percent spike in calls to mental-health hotlines since last Tuesday. More than 300 incidents of election-related harassment and intimidation have been reported, including a spike in hate crimes. Patrick Magoon, head of the Ann & Robert H. Lurie Children’s Hospital of Chicago, says Trump’s election has prompted a “public-health crisis.”

These disturbing trends have affected women, immigrants, Muslims, people of color and the LGBT community alike. But the group Trump has most singled out for targeting since being elected is the undocumented. Trump told CBS’ 60 Minutes on Sunday that his immediate priority is to deport or incarcerate up to three million undocumented immigrants with criminal records, while the rest of the estimated 11 million immigrants thought to be living in the United States without documentation wait in limbo for whatever his administration decides to do with them.

The fear and anxiety produced by the threat of this coming clampdown has hit large immigrant communities the hardest, such as in Chicago. While currently a “sanctuary city,” where immigrants are largely protected from deportation by federal agents, Trump has threatened to pull all federal funding if Chicago refuses to comply with his immigration orders.

In the face of this threat, Chicago Mayor Rahm Emanuel and Rep. Luis Gutiérrez organized a press conference Monday to reassure immigrants in the city that they will continue to be welcomed. But not everyone was convinced.

Luis Gomez, a 21-year-old senior at the Illinois Institute of Technology, took the podium to demand that Emanuel and Gutiérrez expand the protections of the sanctuary city program to cover all immigrants, not just those without criminal records.

“If unity is to be achieved, you need to stop categorizing and separating the undocumented community between deplorable and DREAMers,” Gomez said. “I demand that you stand for all immigrants.”

While expected to simply explain the importance of the sanctuary city program, Gomez instead blasted Emanuel and Gutiérrez for not taking stronger steps to protect undocumented families, and for supporting Hillary Clinton over Bernie Sanders in the Democratic primary.

“We’re in this crisis because of people like Rep. Gutiérrez and Mayor Emanuel, who’ve endorsed a candidate who has alienated the working class, my community, through your stale neoliberal policies,” Gomez said. “If you and your party do not take bold leadership, you will inevitably fail to fight against Trump and his policies.”

In These Times reached Gomez by phone the day after his statement to discuss why he called out the Democratic mayor and congressman, and what his plans are to keep up the fight for immigrants’ rights after Trump takes office.

Can you introduce yourself?

My name is Luis Gomez and I go to the Illinois Institute of Technology. I’m in my forth year studying biochemistry, and I’m undocumented. I came to this country when I was 11 years old, and I’ve been living in the Chicagoland area ever since.

How did you become involved in activism?

Through an organization on my campus called Undocumented Students and Allies, which I’m currently the president of. We advocate for undocumented students and for policies that benefit my community and the school. I also work with Chicago Student Action, the student branch of the People’s Lobby.

How are you, your family and your community responding to Donald Trump’s election?

Last Tuesday I was up until 2 a.m. hoping and waiting [to see if] states like Michigan and Wisconsin were going to go blue and that the Democrats might win. But, they didn’t. And it didn’t really hit me until the next morning when I realized the true implications of the election.

I have DACA, Deferred Action for Childhood Arrivals, which allows me to work for a living in this country. Under President Trump, I will lose that. And my degree—I’m in my final year of school—will mean nothing when I graduate. So I can’t seek employment to use the skills that I studied over four years. And that really—that broke me, a lot. My parents might lose their jobs. And if they lose their jobs, we lose our home. And then my parents won’t be able to help me out with school or any student loans.

From the greater community, there’s a lot of fear of deportations. From the young people, especially with DACA, there’s a hopelessness, because we feel like our future is slipping through our fingers. There are a lot of people who already graduated college who are undocumented and working. They’ll lose their jobs. And they support their families.

So, the young people are feeling really hopeless, and many are on the brink of suicide. It has affected my community’s mental health very harshly. People are very stressed, people are very worried, because we know, because of our status, that we’re going be the ones hurt by Trump’s policies.

Could you explain why you believe it’s important for Mayor Emanuel to make the sanctuary program cover all immigrants, and not just those without current records?

On Sunday, Trump gave an interview saying that he was planning to deport or incarcerate undocumented immigrants with a criminal record. And his policy proposal wasn’t specific about which kinds of crimes they would target, meaning that some immigration violations could in fact become criminal, like returning to the United States after you’ve been deported. It could also include people who lost their way when they were younger, but now are in school—I know people like that who got in trouble with the law—and people who have been desperate because of their situation with no legal status and have resorted to means of survival that are not legal.

When I heard that Trump was planning to incarcerate and deport these people, I knew I had to do something. These people that I’m talking about, these are people in our communities, these are families, these are our friends. It’s important for me to speak for these people because if they deport everyone that I know and love, then there’s no point in saving me.

You need to protect us all, not just the people who you deem as deserving of being saved.

How do you respond to criticisms of people like Rep. Gutiérrez who say that expanding the program would amount to protecting drug dealers and other criminals?

Yes, I understand that there are people who are dangerous. But the program that Trump is proposing doesn’t make a distinction between somebody who has not been reformed and somebody who has been working their whole life to contribute back to society.

You also singled out Illinois Gov. Bruce Rauner, urging him to support the bills SB 2196 and SB 22. Why?

Rauner’s words will not protect me or my community. Policies will. If he signs these bills, he is actively rejecting his party’s destructive policies.

SB 2196 is the Student ACCESS Bill. It would allow undocumented students to apply for scholarships at four year public universities, which we currently don’t have access to. If Rauner does not commit to signing it, many young people who are distressed would be pushed toward the brink. We need some hope. This is a way he could show us that he stands with us. Or, if he doesn’t, that he stands with Trump.

SB 22, the TRUST Act, would make it harder for private prisons and detention centers to be built in the state. With Trump’s rhetoric and policies that would criminalize my community, Rauner taking this type of stand would make my community feel safer.

I truly believe that it is not enough to have Chicago as a sanctuary city, we need to have the entire state of Illinois. Undocumented people don’t just live here; they live outside of the city too.

You criticized Emanuel and Gutiérrez for supporting Hillary Clinton in the primary. Do you think Bernie Sanders would have been better positioned to take on Trump on issues like immigration?

Yes, I definitely think he would have been a better candidate. The American electorate said they were tired of the status quo, and when someone who was different came forward, even when it was for the wrong reasons, they believed it.

Hillary didn’t even mention that we need to stop the construction of new immigrant detention centers. Before she announced her candidacy, she said that we need to deport the young children who came from Central America back as refugees, whereas Bernie firmly stood by them, and by all of my community.

She, as much as Rahm and Gutiérrez, has divided my community into good immigrants and bad immigrants, into those who can be saved, and those who will be left behind.

You said leaders in the Democratic Party need to start taking “bold leadership.” What would this look like?

The Democratic Party never set out a bold vision—for workers, for anyone except the corporatists who donate to their campaign.

People need to ask for things that we’ve never asked for. Stop being politically safe and ask for more—and push for more. We need to ask for what we really want and what we really need, rather than saying “this won’t pass” or “this isn’t possible.” The Democratic Party said that Bernie is not electable, but Hillary is. Well, look what happened on Tuesday.

What do you see as your next steps to fight against Trump?

We need to push people like Rauner, Gutiérrez and Emanuel to support all immigrants. That means flipping the script. Flooding their phones at their offices, demanding they support legislation that will actually protect us, rather than just saying it.

It also means going underground and trying to stop deportations—put our bodies on the line and get arrested so that my community gets to stay here.