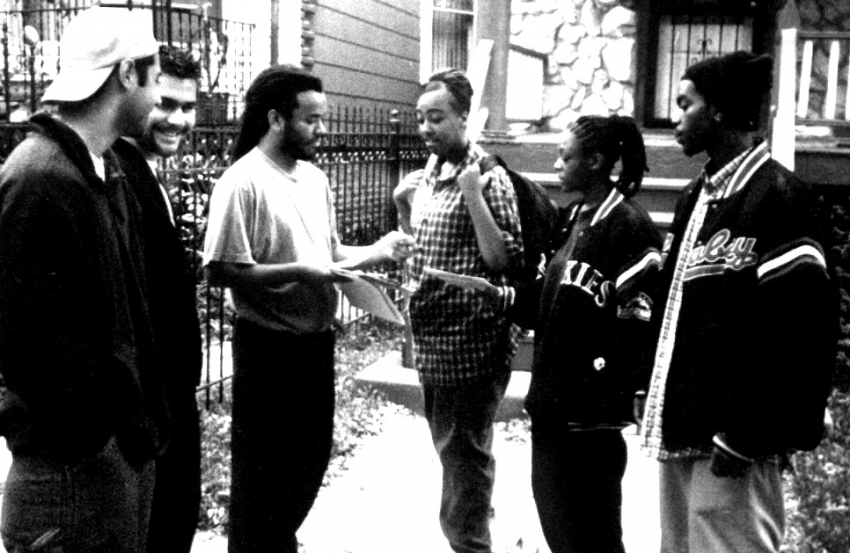 The Athletes, the Street Artists, the Troublemakers and the Ones Who Say “No”

Excavating the revolutionary history of the Southwest Youth Collaborative.

“We treated every young person like they were the next Malcolm X, the next Ella Baker, the next Bayard Rustin. We felt like, ‘This kid could change the world.’"

“It was a national model for what youth organizing and community development should be,” Mathilda de Dios recalls of the Southwest Youth Collaborative (SWYC). A long-time youth organizer, Dios was first introduced to the SWYC in 1999. A quick search online, however, reveals sparse details about the organization, which operated before the digital age could significantly archive its extensive work. Yet, this history needs to be excavated, so that we can learn from the organization’s powerful legacy: youth organizing supported by a multi-service agency and network that built a stronger, safer, more united and politicized community on Chicago’s Southwest Side.

The Southwest Youth Collaborative began in 1992 as part of the “Children, Youth and Families Initiative” of the Chicago Community Trust, a community philanthropic foundation. The Initiative’s 10-year investment established SWYC—along with six other regional collaboratives—to improve social services for young people, emphasizing primary “walk-in-the-door” services, such as cultural, artistic and athletic activities, childcare and afterschool programs, and recreation.

Since its beginning, SWYC’s scope covered several neighboring racially and ethnically diverse communities on Chicago’s Southwest side, including: Chicago Lawn, Marquette Park, Gage Park, West Lawn, Ashburn and West Englewood. For its first two years, SWYC built out its office in Chicago Lawn with two staff managing three afterschool programs. Their chosen neighborhood already had a long history of racialized struggle, as the demographics had shifted to majority Black, Latino and Arab populations since the 1950s.

When Dr. Martin Luther King Jr. led a march for fair housing through the area in 1966, he was met with open violence, injured along with roughly 30 others by the bricks and bottles of a white mob. This incident led him to describe Chicago’s white violence as worse than that of Mississippi. One block from the march’s starting place, at 6400 S Kedzie, SWYC lay down its roots.

Under the leadership of founding executive director, Camille Odeh, SWYC quickly grew to create a comprehensive, coordinated system of neighborhood-based youth services, and a vanguard infrastructure for cross-cultural youth resistance.

Staple in the community

By the mid-1990s, hundreds of Black and Brown youth were in SWYC’s political education programming, with thousands more accessing their quality, comprehensive services. “You could walk in, say ‘I want my GED’ and immediately get connected to a staff person with the right resources,” former program manager, Sandra Sosa, remembers. Other services included sports programs, job training and placement, counseling, tutoring, computer classes, after-school programs and Street Law to help youth manage police interactions.

At its height, SWYC operated with a budget of $3 million, 45 staff, 15 youth programs (with 1,200 youth in sports programs alone), at least six collaborative sites and an impressive set of partnerships that included the YMCA, multiple field houses, churches and dozens of K-12 schools. They hired from their programs and the communities they served, deepening the impact of their work.

By providing free space to grassroots efforts, sharing grants, training other organizations and offering dedicated staff time to help support community initiatives, SWYC incubated a myriad of new projects, programs and whole organizations. Their enormous influence spread far beyond Chicago’s Southwest side. But for those regional to that area, their impact was particularly profound.

SWYC was a staple in the community, helping to bridge and hold the people together. The neighborhood’s demographics necessitated an intercultural approach, as Black, Arab and Spanish-speaking communities were growing rapidly. This diversity was celebrated, centered and nurtured as a core aspect of their work, and principle to their success. Always youth-centered, SWYC still provided space for consistent, intergenerational dialogue through community events, forums and family councils. Their programs built transformative relationships across diverse cultures without flattening differences and experiences. “It was such a communal space,” Sosa recalls.

And no matter what time of day, there was something to plug into and free, supportive resources available for those in need. According to Dios, SWYC was a massive entity of networked social services and robust programs that, even at its largest, managed to stay rooted in the grassroots spirit of “the neighborhood.” Dios says that the “the backyard social spaces” that SWYC facilitated—both literally and in essence—“built incredible youth-to-youth relationships.” From these relationships, further coached by youth organizing staff, a powerful front of youth leadership emerged.

The scale, depth and impact of SWYC’s youth organizing is awe-inspiring, even more so when one takes into account the low priority given to organizing young people at the time. The organization’s success can be traced directly to the principled foundation built by SWYC’s first two organizing staff: Jonathan Peck and Jeremy Lahoud, two college friends hired by Odeh in 1994.

“For the first year or two, we really didn’t do a lot of organizing,” Peck explains: “We said, ‘We want to know all the ways that people are struggling to make change happen.’ So we’d spend half a day up in Little Village at Rudy Lozano’s, getting to know the neighborhood. Next week, we’re up in Uptown for a few days… We weren’t trying to judge anybody. We were building relationships. It was a genuine exchange.”

At the same time, they began to build out the infrastructure of primary services for young people.

“You gotta get woke”

As Peck explains, “Before you can get organizing, you gotta get woke.” The service programs that brought in thousands of young people every year were just the beginning for many of those who walked through SWYC’s open doors. While the programs were intended, first and foremost, to meet specific material needs of young people in the community, they also served to introduce those young people to political principles and ideologies. For example, as part of the Sports Program, young people were mentored to become coaches using principles of restorative justice.

The arts and culture program, “University of Hip Hop,” trained young people to design Hip Hop community development projects for neighborhood beautification and transformation. One of the earliest established programs was Freedom Summer, an intensive, stipended political education institute where young people could spend 20 hours a week all summer learning about histories of resistance and gaining exposure to current organizing efforts in the city.

Participants in any of these programs, now “woke,” were invited to apply for the two organizing bodies of SWYC: Generation Y and the Community Justice Initiative (CJI). Generation Y was an explicitly youth activist organization, made up entirely of Black and Brown young leaders from SWYC’s programs. CJI was a city-wide coalition that emerged out of the youth-led trainings of SWYC’s Street Law program, where young people had been training organizations and communities for years, building up a city-wide network of partners. The coalition invited those former Street Law trainees to join youth leaders in organizing city-wide campaigns, maintaining a membership that was 50 percent youth of color.

It was here, between Generation Y and the Community Justice Initiative, that the true power of SWYC’s community organizing model was demonstrated.

Remember, this was the 1990s: the decade of Public Enemy, Rodney King and the final phase of anti-apartheid struggle. Youth of color are being targeted as “superpredators,” leading to increased criminalization, hyper-policing and harsher sentencing. At one point, a new ordinance was proposed to establish “running” as probable cause. This was defeated through Generation Y’s leadership.

Overall, the high visibility created locally by young people of color through organizing town halls, knocking on doors, throwing block parties and undertaking social-change work contributed to intergenerational shifts at the community level. “What did they accomplish? They reframed the narrative around young people,” insists Sosa.

Participating young people were presented with as much information and training as possible, without requiring a specific action step by Peck or Lahoud. Organizers let young people decide the who, the what, and the how they wanted to learn. “We opened up space where young people felt safe, where they could learn and grow without being attacked, and felt like they had ownership.”

SWYC’s youth organizers built relationships with “the unusual suspects of the time,” remembers Peck. “We sought out the athletes, the street artists, the troublemakers, the ones who say no.” Their attitude toward the young people they met was fundamental to SWYC’s organizing success. Peck stresses, “We treated every young person like they were the next Malcolm X, the next Ella Baker, the next Bayard Rustin. We felt like, ‘This kid could change the world.’ And we treated them with that respect and gave them the tools necessary to fight their battles.”

The SWYC model “was phenomenal,” Sosa reflects. By 2012, however, funding shortfalls brought an end to the beloved organization. In its wake, an undeniable and enormous gap in community services formed. While what SWYC was may have ended, the lives changed, the ongoing influence of the leaders they trained, the manuals and instruction of their work and the legacy of their example remains today—for all of us searching for hope in the struggle.

Page May is an abolitionist, teacher and Chicago-based youth organizer with Assata's Daughters. She is one of the eight delegates from We Charge Genocide who traveled to the United Nations in 2014, and she was the lead author of the shadow report submitted to the UN Committee Against Torture. She is also the co-host to The Lit Review, a literary podcast for the movement. Follow her at @may20p.