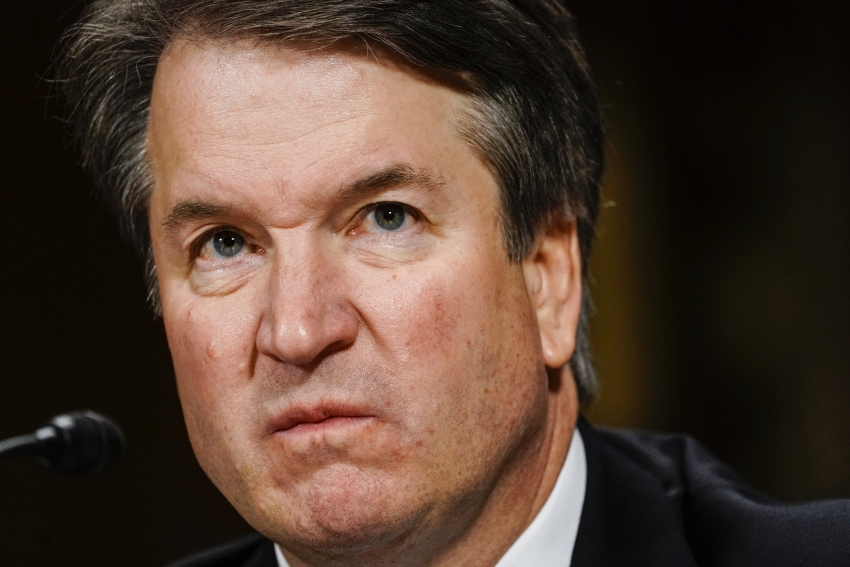 Throughout his life, Brett Kavanaugh has benefited from a system that sanctions lying and puts the conquest of power and personal prestige above all else. (Melina Mara/The Washington Post via Getty Images)

Kavanaugh doesn’t just benefit from a system that shields men in the face of endemic sexual abuse—he embodies it.

Kavanaugh’s adherence to a culture of male protection and a patriarchal code of conduct may have been instilled in Georgetown Prep, but it continues through to today.

Everything about Supreme Court nominee Brett Kavanaugh’s testimony before the Senate Judiciary Committee last week screamed of righteous indignation over being forced to answer for allegations that he may not be as stainless as his most ardent supporters have avowed. Judge Kavanaugh didn’t just dismiss the claims of his accuser Dr. Christine Blasey Ford, he did everything in his power to portray himself as the victim of a “nefarious plot” that has nearly destroyed his family.

Standing on the precipice of becoming one of the nine most consequential people in all of American jurisprudence—where he could cast the deciding vote on everything from abortion rights to affirmative action—Kavanaugh insisted upon his innocence, and repeatedly lied in the process.

And as more information has come out about President Trump’s current Supreme Court nominee, it’s increasingly clear that, whether or not you believe Ford’s claims of sexual assault are true, Kavanaugh is a human emissary for our country’s perverse disease of rape culture.

Broadly defined, rape culture is the normalization of sexual violence due to debased attitudes toward sexuality and gender in our society. When it comes to Kavanaugh, his actions have shown that he is on a ruthless hunt for power—and is willing to throw women under the bus along the way. He has been repeatedly dishonest under oath, abandoning credibility. He has been complicit in plots to undercut and dehumanize his female accusers. And he's operated within a class of wealthy white men protected by a patriarchal system that shields them from recrimination. His acts fit into a clear pattern of rape culture.

Brett Kavanaugh faces multiple accusations of sexual assault. Ford claims he pinned her down while thrusting himself onto her with his hand over her mouth, to the point she thought she might die. Deborah Ramirez claims he laughingly shoved his penis into her face in a college dorm while another man told her to “kiss it.” Julie Swetnick claims Kavanaugh participated in gang rapes at parties while a student at Georgetown Preparatory School, and at one such party she herself was raped after being drugged.

These claims are shocking only insofar as they are being leveled against a nominee to the highest court in the land. Taken on their own, however, they are all too normal. Nearly one in four women in higher education has been the victim of an attempted or completed rape over the course of her college career. Of those attempts, less than 5 percent are ever reported to law enforcement. And one feature of a large proportion of these acts of sexual assault is the presence of high levels of alcohol use.

Throughout the Senate hearing, Kavanaugh repeatedly sought to downplay his drinking habits while in college. But according to former Yale classmate Chad Ludington, that is a “blatant mischaracterization.” In a public statement, Ludington said that “in denying the possibility that he ever blacked out from drinking, and in downplaying the degree and frequency of his drinking, Brett has not told the truth.”

Ludington isn’t alone: Numerous other classmates describe Kavanaugh as being an excessive drinker in college. While these claims offer no proof that he engaged in the acts he’s charged with, they do cast enormous doubt upon the judge’s credibility and honesty. If he is lying to cover up his alcohol abuse while a teenager, who’s to say he isn’t also lying about alleged sexual assault during the same time period?

Drinking isn’t the only area where Kavanaugh has not told the truth. He claimed that all of the witnesses to the alleged assault of Dr. Ford said: “it didn’t happen.” That’s simply not true. Mark Judge, who Ford said was present during her assault—and who the FBI has investigated—said he didn’t “recall” the event, not that it didn’t happen. Two other witnesses, Leland Ingham Keyser and Patrick J. Smyth, also said they didn’t remember the night in question, rather than denying the assault took place. And Keyser actually said she “believes Dr. Ford's account.”

Kavanaugh also testified that he had heard nothing about Ramirez’s accusations until they were published in the New Yorker last week. That claim appears to be falling apart in the face of the release of text messages that indicate both the judge and his staff were aware of the allegations months before the New Yorker article came out. The texts also show that Kavanaugh’s team had been plotting ways to undercut Ramirez’s story. This distortion points to a craven quest for power by Kavanaugh, which he was willing to fully discredit a former classmate and lie under oath in order to pursue.

Some of the most disturbing lies pertain to the casual use by Kavanaugh and his peers of language that dehumanizes women. In his Georgetown Prep yearbook, Kavanaugh and a number of his fellow football players used the term “Renate Alumni” to refer to classmate Renate Dolphin, an apparent reference to having had sex with her. Kavanaugh denied this during the hearing, claiming instead it was a term of endearment and belonging. Dolphin, however, sees it another way, calling the yearbook entries “horrible, hurtful and simply untrue.”

Sen. Jeff Flake, who demanded that the FBI conduct an investigation into the claims of assault against Kavanaugh as a precursor to his nomination being sent to the Senate floor for a vote, said on 60 Minutes last week that if the judge was found to have been lying, then his nomination would be “over.” Even Lindsay Graham, a die-hard Kavanaugh supporter, said in 1999 that if a judge commits perjury, that’s grounds for immediate impeachment.

Whether or not the FBI concludes it from their brief investigation, there are reams of evidence showing that, even under oath, Kavanaugh has not been telling the truth. That should be enough to not only sink his nomination but to have him disbarred. Yet, throughout his life, Brett Kavanaugh has benefited from a system that sanctions lying and puts the conquest of power and personal prestige above all else.

Kavanaugh comes from a world of privilege—of prep schools and post-game keggers, of boys’ clubs and secrets kept under all circumstances if it means protecting your inner circle and those you hold in esteem. These are also the ingredients that produce an incredibly dangerous climate for women, as well as LGBTQ communities.

One in three college men say that they would rape if they knew they could get away with it (though they would prefer not to call it “rape”). While that figure should be shocking, it’s too often accepted as a natural outgrowth of our “hyper-sexualized” society. In practice, that means that sexual assault of women becomes deeply normalized, and reporting it becomes more of a risk for the accuser than the accused.

Despite Trump’s statement that if the allegations by Ford are true then she would have filed a police report “immediately,” taking such a step against a powerful figure like Kavanaugh—both then and now—would always be a risk. Today, after testifying before the Senate and having her life propelled into the public eye, Ford is regularly receiving death threats and has had to move away from her family home in California.

Kavanaugh’s adherence to a culture of male protection and a patriarchal code of conduct may have been instilled in Georgetown Prep, but it continues through to today. It’s the same code that Kavanaugh followed while defending torture being carried out under top officials in the Bush administration. And it’s the same code that was put on full display when a lawyer close to the White House told Politico that, “If somebody can be brought down by accusations like this, then you, me, every man certainly should be worried. We can all be accused of something.”

Under this reasoning, it’s Ford who has transgressed by voicing her charge, not Kavanaugh. And it’s this same reasoning that has allowed men to feel entitled to women’s bodies—and to the upper echelons of power—regardless of any obstacles that may stand in their way.

At a time when more and more women are speaking out about endemic sexual abuse, Kavanaugh’s nomination serves as a funereal reminder that rape culture is still pervasive. If there was ever a time for our elected officials to come together to reject that enduring disorder—and hold its adherents to account—it’s now.