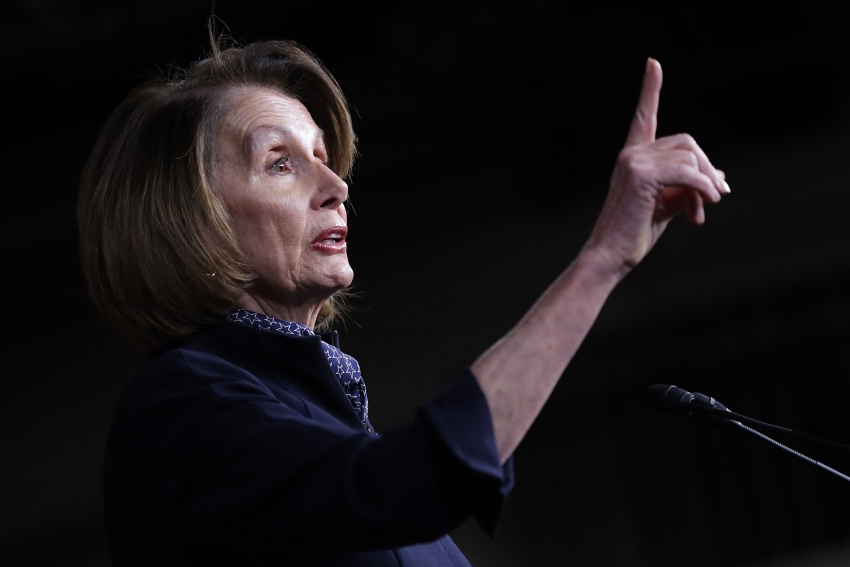 “Achieving the goals outlined in the resolution for a Select Committee on a Green New Deal are the bare minimum we need to preserve life as we know it for our generation—anything less from our political leaders is a betrayal of young people around the world.”

As House Democratic leaders prepare to reclaim power this January, they are clamping down on insurgent progressive initiatives like the Green New Deal, which could be sidelined in favor of a broader climate committee with limited powers.

Despite pledges from at least 43 Democrats to support a Green New Deal select committee—including prominent representatives like Barbara Lee (D-Calif.) and John Lewis (D-Ga.)—incoming House Speaker Nancy Pelosi (D-Calif.) derailed the move on Thursday by creating a climate committee with no explicit commitment to crafting a Green New Deal.

Thursday afternoon, The Huffington Post reported that Pelosi picked Florida Rep. Kathy Castor (D-Fla.) to head the new climate committee, which may include members who take campaign money from the fossil fuel industry.

The setback threatens to derail one of the more hopeful and fast-rising progressive initiatives in the new Congress—and comes as scientists worldwide warn we have 12 years to stem the climate crisis from yet more catastrophic and irreversible disaster. Ocasio-Cortez’s proposal would have created a select committee to craft a full Green New Deal plan by 2020. Pelosi’s move, at minimum, significantly stalls that effort, even as the climate-crisis clock ticks away.

Pelosi’s move must be approved by the House Rules Committee in January to be official. On Friday, Rules Chairman Rep. Jim McGovern (D-Mass.) announced he is already crafting a proposal for a climate committee which, according to Energy & Environment News, “will have no legislative or subpoena power, nor will it be specifically tasked with crafting a ‘Green New Deal’ bill.”

Further confirming the committee’s limited abilities, Rep. Steny Hoyer (D-Md.) “said Wednesday that it was his understanding that the committee wouldn’t have the legal authority to demand documents,” The Hill reported. Hoyer told reporters, “My expectation [is] it will not have subpoena power. It will be a recommendatory committee to the Energy and Commerce Committee and the environmental committees.”

According to The Hill, “A Democratic leadership aide later confirmed the lack of subpoena power.”

Pelosi’s office did not immediately respond to calls and emails from In These Times requesting clarification. On the phone, one staffer cited “the government shutdown” as cause for their inability to reply.

Response came swiftly via Twitter from Alexandria Ocasio-Cortez, the incoming Democratic representative for New York who is one of the chief advocates of the Green New Deal. “Our ultimate end goal,” she wrote, “isn’t a Select Committee. Our goal is to treat Climate Change like the serious, existential threat it is by drafting an ambitious solution on the scale necessary—aka a Green New Deal—to get it done. A weak committee misses the point & endangers people [sic.].”

Corbin Trent, an aide to Ocasio-Cortez, told The Hill that subpoena power is essential to the legislative process. “We think that the committee needs to have the authority and the capacity to develop a plan for a Green New Deal to transition our economy to a zero-carbon economy in a 10-year timeframe,” Trent said. “Without subpoena power, without the ability to draft legislation, without the commitment to not put members in seats that are taking money from the fossil fuel industry, then we don’t think we would have the capacity to do so.”

Despite the setback, Green New Deal advocates are not giving up. The Sunrise Movement, one of the groups campaigning hard for a Green New Deal, told In These Times, “Nothing will be official until the Rules are approved on Jan 3, so we're going to keep pressuring Representatives across the country to support up until then.”

In a more extensive statement issued late Thursday, Sunrise Movement co-founder Varshini Prakash wrote, “Without a mandate to create a plan and a requirement that its members don’t take fossil fuel money, we are deeply concerned that this committee will be just another of the many committees we’ve seen failing our generation our entire lives.”

Prakash added, “Achieving the goals outlined in the resolution for a Select Committee on a Green New Deal are the bare minimum we need to preserve life as we know it for our generation—anything less from our political leaders is a betrayal of young people around the world.”

It remains unclear whether these concerns will be heard by new climate committee chair Castor, who has received substantial campaign donations from energy and natural resources industries. As The Huffington Post reports, “According to the nonpartisan Center for Responsive Politics, Castor accepted more than $73,000 from the energy and natural resources sector over her 12-year tenure in Congress, including $60,000 from corporate political action committees.”

As Democrats continue to battle over the issue of prohibiting fossil fuel campaign contributions, Castor told The Huffington Post Thursday, “I don’t think you can do that under the First Amendment, really.” But Castor soon recanted, saying, “Maybe that’s a discussion we need to have in the caucus.”

Castor said Thursday that the Green New Deal includes “some terrific ideas,” and may be one of many topics the new committee takes on. “But that's not going to be our sole focus,” she emphasized.

Despite mounting public and political support for the Green New Deal, the Democratic House leadership remains resistant to the initiative, which has stirred hope among many young activists and newly elected members of Congress.

Established House leaders such as incoming Energy and Commerce Chairman Frank Pallone (D-N.J.), “generally want the select panel not to be formed or to have little real power,” Energy & Environment News explained. Pallone has opposed the Green New Deal select committee, and refused to answer questions about it over the last week. Pallone told reporters, “I'm not talking about the select committee. I don't want to.”

For many, Pelosi’s move to scuttle and sideline the Green New Deal committee marks not only disappointment, but a missed opportunity. As Prakash put it in her statement, “A Select Committee that makes a plan for implementing a Green New Deal is an opportunity for Democrats in the House to advance policy goals that 81 percent of voters support, and are in line with what science says is necessary to give our generation a livable future.

With climate crisis growing, and vast public support for a plan to create millions of jobs to de-carbonize the economy, eliminate fossil fuels and expand renewable energy, Pelosi’s stifling of this surging reform is not only a political setback. In the face of the stark realities we face, the move seems to this reporter a kinder, gentler version of planetary suicide.