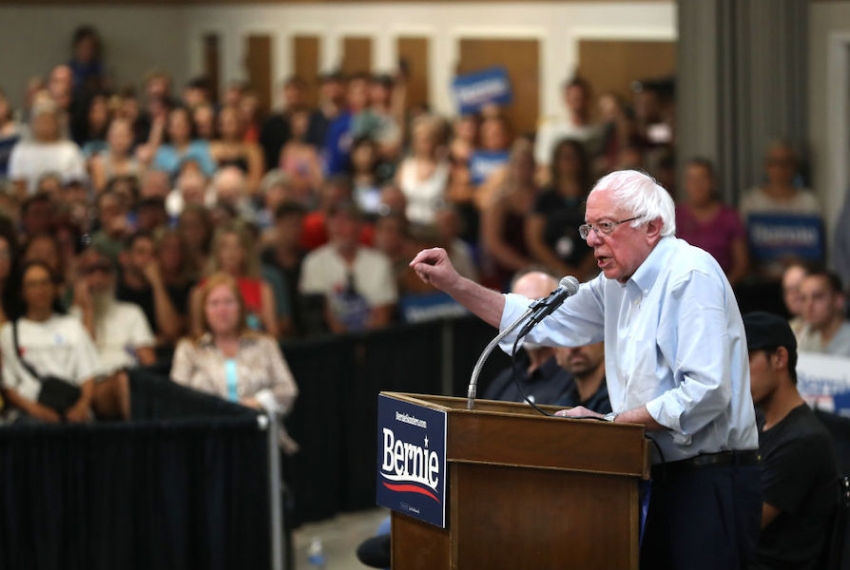 Bernie Sanders Calls To Seize the Means of Electricity Production

At the municipal, district and state levels, Sanders explicitly commits to supporting the growth of public and co-op utilities.

A year after a neglected Pacific Gas & Electric (PG&E) power line sparked a wildfire that tore through northern California, presidential candidate Sen. Bernie Sanders on Thursday visited Chico, Calif., where many who fled the fire made a new home. He held a town hall the same day he released a new climate plan, in which he declared that the days of investor-owned utilities—with their profit incentives to underinvest in the electric grid and double down on fossil fuels—have to end.

He’s right: It is time for a massive public takeover of the nation’s electric grid.

The for-profit companies that reign over our energy system now have shown no meaningful sign of being willing to transform our energy system; they are much more interested in shareholder gains and business as usual. Together, for-profit utilities and fossil fuel companies have created powerful political-economic machines across the country to solidify the status quo of extraction and extortion. In contrast, democratic public ownership of our energy system could prioritize community benefit over profit, paving the way for a just and equitable energy system.

“We will end greed in our energy system,” says Sanders’ climate plan. “The renewable energy generated by the Green New Deal will be publicly owned.”

His plan comes as public power ownership campaigns mobilize across the country. California’s movement took off after the state’s largest for-profit utility, PG&E, requested a bailout after the fire forced the utility to declare bankruptcy under the weight of liability claims. Communities across the state are now demanding public ownership, and the company’s hometown of San Francisco has begun looking into municipalization.

In New York, in the midst of a July heat wave, Con Edison sacrificed low-income communities of color in Brooklyn by cutting their power to avoid a larger blackout. Residents responded with outrage, and Mayor Bill de Blasio, another presidential contender, called for kicking out the utility in favor of public ownership.

The birthplace of the monopoly for-profit utility, Chicago, just introduced an order to study the feasibility of taking over Commonwealth Edison after years of rate hikes and inaction on climate change. Alderman Carlos Ramirez-Rosa said that “through municipalization, Chicago could accelerate decarbonization, and implement a progressive rate structure that ensures better rates for working-class Chicagoans.”

Over the past months, multiple Democratic presidential candidates have come out in favor of democratizing our energy system. Washington Gov. Jay Inslee (who this week dropped out to run again for governor) centered much of his plan for a clean energy economy on community-owned and community-led renewables. And Julian Castro—the former mayor of San Antonio, where one of the more progressive public utilities is located—has voiced support for policies that empower the public to set up democratic utilities not only for electricity but also internet services and water.

But Sanders has voiced the most direct support for 100% public power, and this demand is fundamental to his climate plan. Unlike other proposals to date, Sanders’ plan explicitly commits to using public dollars for everything, refusing to leave the transition to corporate investors who so far have failed the public. By doing so, the Green New Deal proposal also ensures that the benefits of the plan don’t disappear into the pockets of billionaires like Elon Musk but are directed toward a more equitable society. Publicly funded projects, when structured so communities have a say in the types of projects and jobs they create, also have the potential to be more accountable, and can prioritize marginalized communities’ access to high-paying, unionized public jobs and respect the rights of the communities where this new infrastructure is built.

Sanders’ plan envisions harnessing and expanding the four already-operating federal Power Marketing Administrations (PMAs) and the Tennessee Valley Authority (TVA), as well as creating a fifth PMA, to build out renewable energy. It would inject $1.52 trillion into renewable energy expansion and $852 billion into energy storage, working particularly with publicly or cooperatively owned utilities. By 2035, this plan would essentially decommodify energy generation through the federal authorities. Unlike the TVA of the past, designed largely for the benefit of white men in search of work in the South, the entire plan is based on the Jemez Principles of environmental justice that focus on bottom-up organizing and including all people in decision-making.

At the municipal, district and state levels, Sanders explicitly commits to supporting the growth of public and co-op utilities. Already, public and cooperatively owned utilities serve 49 million people in the United States, at lower costs and with generally more reliable service. In fact, the entire state of Nebraska runs fully off of public power after the state expelled the for-profit utility in the 1940s because of its extortionist rates. Unlike their for-profit counterparts, these entities are ultimately beholden to the public and any profits are reinvested into the community’s schools, parks and public services. This plan would help this sector expand its reach and invest more in renewable energy, energy efficiency, and much more.

It also provides express assistance to states and municipalities so they could start their own democratically owned utilities—ones driven by the public interest and a climate-resilient future. This could be key for places like New York or Chicago that are starting the process of taking over their utility, seeking guidance and expertise throughout the process. By taking energy utilities into public ownership, we can catalyze renewable energy deployment at the same time we redistribute wealth and power.

Elements of Sanders’ proposal are similar to a proposal for a Community Ownership of Power Administration that was co-created by The Democracy Collaborative (where I work) and grassroots energy groups.

Sanders’ plans for public ownership don’t stop at electricity. He would also allocate funds to massively increase public broadband projects to give people access to a new and necessary public good: the internet. An estimated 19 million people, largely located in rural America, still do not have access to broadband. He offers a vision for integrated and effective local public transportation systems with high-speed rail connections. He stresses the importance of building high-quality, low-carbon-footprint public housing, as well as weatherizing already-standing homes to end energy poverty. The plan reinstates the federal Civilian Conservation Corps jobs program to restore our public lands. It invests dramatically more in public regional development agencies like the Appalachian Regional Commission. It even creates spaces for cooperatively owned grocery stores to facilitate local agriculture not held hostage by monopolies like Monsanto.

Sanders is not alone in his call for more public ownership. Sen. Elizabeth Warren has similarly audacious plans for services like broadband, and both Warren and Sen. Cory Booker have invoked the Civilian Conservation Corps as a model. However, Sanders’ Green New Deal proposal stands alone in its comprehensive commitment to public funding and programs.

The future is public. It is accountable to the principles of environmental justice. It is democratic. It is decommodified. Sanders’ plan is the latest to set the bar for a new economy shepherded in by the green energy transition. We learned long ago that private interests won’t solve for climate and justice at the same time—that change will have to come from united and empowered people. Now, this realization is firmly on the presidential political agenda.

Johanna Bozuwa is a research associate with The Next System Project at the Democracy Collaborative. Her work focuses on transitioning away from the extractive, fossil fuel economy and toward energy democracy.