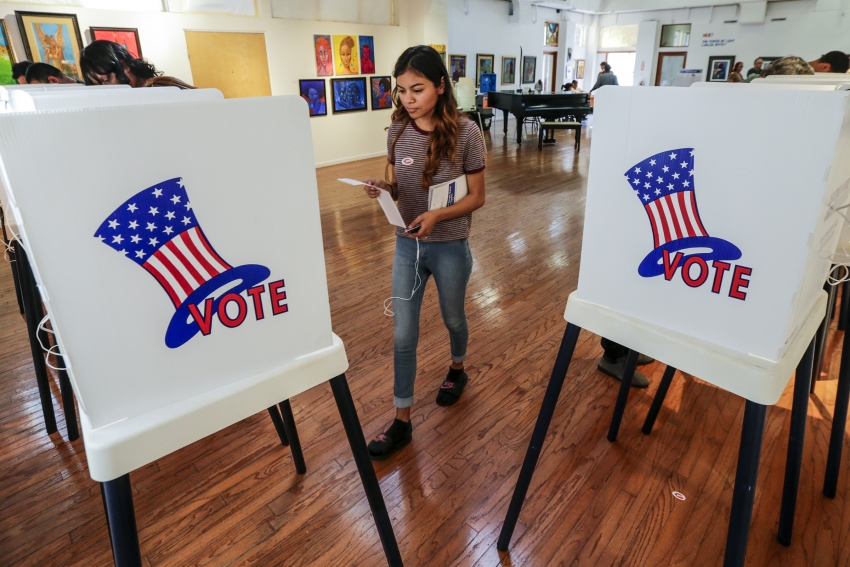 How Ranked Choice Voting Could Make the 2020 Election More Democratic

The landmark voting reform is quickly spreading across the country—and could have a major impact on contests in 2020.

By 2021, if reformers hit their mark, approximately 20 million Americans could live in a jurisdiction that uses some form of RCV.

In September, Rep. Jamie Raskin introduced the Ranked Choice Voting Act in Congress. If adopted, the legislation would mandate the use of ranked choice voting (RCV) for House and Senate elections.

The bill doesn’t currently have the votes to pass through the House, but the lack of establishment support obscures an exciting truth: Outside the beltway, RCV is on a track to become the next major widespread democracy reform. And, ahead of the 2020 elections, reformers have an unprecedented opportunity to take this formerly fringe idea mainstream.

RCV allows voters to rank candidates in order of preference on the ballot. If no candidate receives a majority of first place votes, the last place vote-getter is eliminated and their voters are reallocated according to second place preferences. This process continues until one candidate surpasses 50%.

RCV better guarantees that every vote counts, eliminates the “spoiler” effect that occurs when third party candidates run for office, and ensures that, in a crowded field, no one wins with merely a fraction of the vote. It also decreases negative campaigning.

The road to mainstream appeal begins in New York. Tomorrow—Tuesday, November 5th—New York City will vote on a ballot initiative to bring RCV to primary and special municipal elections.

According to data provided to In These Times by electoral reform group FairVote, over 4 million Americans currently live in a jurisdiction that uses or will use ranked choice voting. A victory in NYC—a city with over 8 million residents—would triple that number. It would also expose the reform to the many journalists and pundits who live in the city, which could better prime them to cover it moving forward.

Widespread competency in reporting about RCV will become critical. Following the NYC ballot initiative, up to five Democratic presidential caucuses—Nevada, Alaska, Hawaii, Kansas and Wyoming—will likely use RCV to determine convention delegate allocation. (In the presidential primary, votes would be re-allocated until all remaining candidates garner above the delegate threshold set by a political party.)

Though not all voters in these states would use an RCV ballot in 2020 (Nevada intends to restrict RCV to those who vote early), seamless implementation will greatly increase familiarity with the reform. After its first usage in Maine last year, almost three quarters of the electorate found the process relatively easy to navigate. All the while, media coverage will educate those out-of-state.

While the state Democratic parties have approved the use of RCV in these states, there is still some uncertainty about where it will ultimately be implemented. The Democratic National Committee (DNC) has yet to give final approval to each plan.

“Iowa and Nevada had proposed allowing virtual caucuses via the telephone. The proposal raised security concerns about hacking and the DNC rejected it,” FairVote CEO Rob Richie said to In These Times. “Nevada Democrats, though, still plan to have early voting with what amounts to ranked choice ballots. We expect the party to accept this new plan

The DNC has recently approved RCV in Hawaii and Kansas, which are moving forward on plans to hold vote-by-mail primaries and use a traditional RCV tally in each congressional district. According to Richie, Wyoming and Alaska Democrats have formally notified the DNC of their intent to use RCV in a similar way and expect approval for use in 2020. And because of the use of vote-by-mail, FairVote’s Richie also projects caucus participation will greatly exceed that of 2016, which saw approximately 175,000 caucus-goers.

If the DNC and state parties work together to ensure the usage of RCV in these caucuses, it would ensure a more democratic allocation of delegates—after all, the DNC requires candidates to surpass 15% of the vote to receive any delegates, inevitably leading to many wasted votes in a crowded field.

Accompanying efforts to reform the primary, a handful of presidential candidates—Bernie Sanders, Andrew Yang, Tulsi Gabbard, Bill Weld, Michael Bennet and Marianne Williamson—have gone on record supporting RCV. By doing so, these politicians have signaled to their millions of supporters that the reform is worth pursuing.

In August, Maine Gov. Janet Mills allowed a presidential election ranked choice voting bill to become law without her signature, delaying its implementation until mid-2020. This precludes the adoption of RCV in the upcoming presidential primary, but permits it in the general election. As a result, the 2020 election will mark the first time in U.S. history a state will use RCV to elect the president.

Election day 2020 may also see two ballot initiatives to adopt RCV statewide in Massachusetts and Alaska. The Attorney General in Massachusetts has certified the language of the RCV initiative, and Bay Staters are now collecting signatures to qualify for the ballot.

The effort in Alaska has been delayed, as Lieutenant Governor Kevin Meyer rejected the campaign’s proposed initiative on the grounds that it violated the state’s single issue requirement for initiatives (RCV was included alongside other democracy reforms in their proposed ballot language). Nevertheless, a Superior Court Judge ruled that signature gathering can begin. The state is expected to appeal this ruling to the Alaskan Supreme Court.

In both Alaska and Massachusetts, should they make it to the ballot, advocates’ biggest obstacle is the lack of popular knowledge about RCV. But with New York City, potentially five caucus states, and Maine using the reform in high-profile contests over the next 12 months—and presidential candidates endorsing it—momentum is on their side.

By 2021, if reformers hit their mark, approximately 20 million Americans could live in a jurisdiction that uses some form of RCV. Millions more will have been exposed to the reform through the presidential election. All of this, in turn, would lay the groundwork for future state-based mobilizations to advance RCV in states such as Colorado, New Hampshire, Connecticut and Vermont where activists are currently building campaigns, as well as for federal legislation.

The path towards a better democracy is now open. The only question is if we will take it.