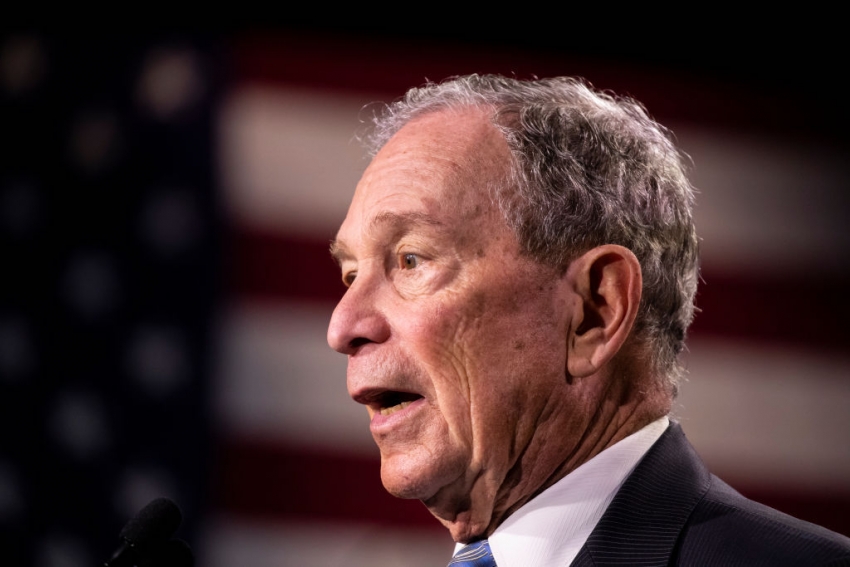 With Bloomberg Running, A Student Debt Strike Is Even More Urgent

Billionaire Michael Bloomberg launched his campaign for president by spending hundreds of millions of dollars on advertisements to boost his poll numbers. Yesterday, he released a policy proposal to address the cost of higher education.

Unsurprisingly, Bloomberg would not cancel all student debt or make all public colleges free for everyone (as Bernie Sanders proposes). An earlier, leaked version of Bloomberg’s education plan published by The Intercept on February 17 suggested that all undergraduate borrowers would be automatically enrolled in an income-driven repayment plan (IDR) that in which student loan payments would be withheld from paychecks. The leaked plan says borrowers could “opt out,” but it is unclear what options would remain. The version of the plan later published on Bloomberg’s website omits this language about the paycheck withholding system entirely.

He suggests making two-year public colleges free for all and making both two-year and four-year college tuition-free and debt-free for the lowest-income students—and although some are touting this as a “progressive” plan, this is simply not good enough. Today, there are 45 million people are carrying $1.6 trillion in loans. What’s worse, student debt has a disproportionate impact on people of color and women, precisely those groups for whom education was supposed to provide a path to a better life. It turns out that a college degree alone can’t address racial, gender or economic inequality, particularly when education has been turned into a consumer product instead of what it ought to be: a public good.

While everyone knows that servicers like Navient make a bundle collecting on student loans, what a lot of people don’t realize is that millions of us are already not making payments. In 2015 I helped organize the first student debt strike in U.S. history as part of the Debt Collective, an organization for debtors that I co-founded. That strike helped win more than $1 billion in debt relief for people who had attended predatory for-profit colleges. The Department of Education reported that, as of March 2019, 20% of student debts were in default, meaning borrowers have not made a payment in 270 days. This trend shows no sign of slowing down. According to the Center for American Progress, about a million new borrowers go into default every year. As the number of people who are forced to debt finance their college degrees has risen, so has the number of those who can’t—or won’t—pay.

But defaults are only part of the story. The federal government has reported that only 36% of people with student debt are making progress repaying their loans. Millions are not even making payments because we are enrolled in deferral, forbearance or in one of the “income driven repayment” plans that allow many low-income people to pay nothing.

It is time that we call this massive non-repayment what it is: a debt strike. Indeed, that is exactly what the Debt Collective aims to do. Debtors who are not making payments, whether they are in default, forbearance or $0 income-based repayment, can join the campaign as bona-fide debt strikers. By joining together with others in their situation, student debtors can send a message to the federal government, lenders, collectors and especially to those running for president that they have had enough.

Why is now the time for a national student debt strike? First, collective action by debtors brings people together. With an election in full swing and many people divided over the right way forward, one thing is certain: More of us need to get involved. The fact that millions are struggling with educational debt can unite us across our differences and give us a reason to get involved in the political process. I saw this type of shared struggle firsthand five years ago during the strike that I helped to launch with former for-profit college students. People from all walks of life including Democrats, Republicans and those who don’t identify with either party came together to demand justice from the federal government—and they won! Now is the time for student debtors to rise up with one voice.

What do student debtors want? The Debt Collective has long been demanding a student debt jubilee and free public college. A decade ago, such proposals were considered totally outside the mainstream. Today, thanks in part to the Debt Collective’s work, top presidential candidates have signed on to both policies. First, Sen. Elizabeth Warren (D-Mass.) proposed cancelling a portion of student debt. Then, Sen. Bernie Sanders (I-Vt.), along with Reps. Pramila Jayapal (D-Wash.) and Ilhan Omar (D-Mich.), introduced bills that would cancel all student debt, both federal as well as private loans, and make public college free.

Such proposals represent a stunning shift in public policy, and they were made possible by ordinary people rising up and refusing to pay. In fact, the Debt Collective has already identified the mechanism by which federal student loans can be cancelled. One of our founders co-wrote a legal brief on the Higher Education Act of 1965, which gives the Department of Education the authority to decide not to collect federal student debt, without going through Congress.

We are closer than ever to liberating tens of millions from the burden of student loans and to assuring that future generations have a right to a quality education without going into debt.

The Debt Collective has helped to normalize the idea that student debt can be cancelled. We also showed that it can be done. Indeed, for thousands of former for-profit college students who have been freed from their debt, joining a debt strike had a profoundly positive impact on their lives.

I attended a public university. But I have much in common with former for-profit college students who believe education is a right and a public good. Regardless of where we went to school—whether it was a private college, a public university, or a predatory for-profit—the fight for debt cancellation, free education, as well as for public goods more broadly, must include all of us. That’s why, this time, in addition to helping to organize the strike, I’ve joined it. I believe it’s time to follow the example of those who already refused to pay and won. More and more people are recognizing the power of collective action by debtors. This is precisely the kind of collective action that Bloomberg’s higher education plan intends to stop in its tracks. And that is why he must—and will—be stopped.

An earlier version of this article incorrectly implied that Bloomberg's officially released education plan had language about garnishing borrowers' wages for student loan payments. It has been updated to explain that an earlier, leaked version of his education plan, published by The Intercept, does have language saying all undergraduate borrowers would be automatically enrolled in an income-driven repayment plan that in which student loan payments would be withheld from paychecks. The article has also been updated to reflect, and to clarify, that Bloomberg proposes debt-free college for some, but not all.​ In These Times regrets these errors.

Ann Larson is a co-founder of the Debt Collective, a union for debtors that has won more than one billion dollars in relief for former for-profit college students.