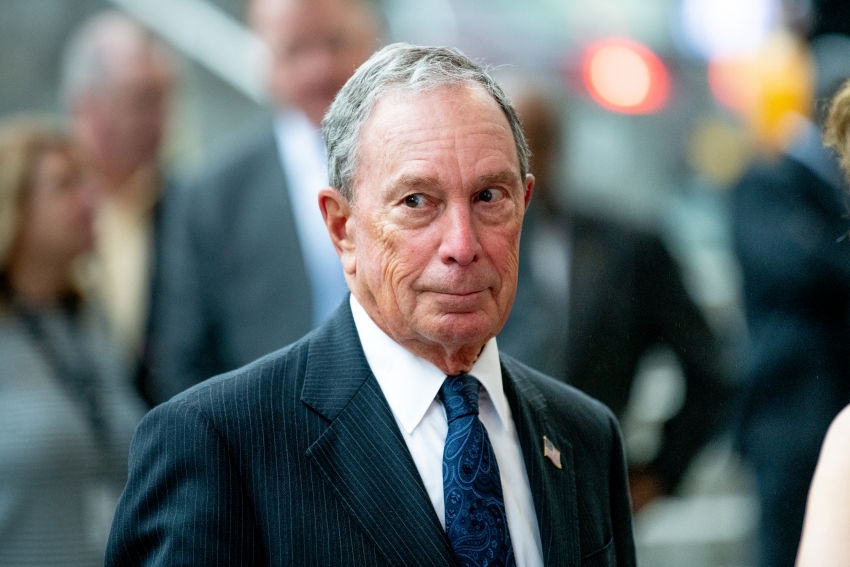 The billionaire has defended Islamophobia and Israel’s wars. He’ll fit right in at the AIPAC conference.

But there’s one Democrat who is attending the March 1 to 3 conference: billionaire and former New York City Mayor Michael Bloomberg. (Update: following publication, AIPAC announced that Joe Biden will deliver a video message to the conference.)

Bloomberg may be alone among his Democratic presidential cohort in going to the Israel lobby’s annual confab, but he’ll fit right in: The event will feature speeches by other right-wing Islamophobes and defenders of Israeli apartheid. He’ll feel at home at AIPAC because Bloomberg himself has a long record of reflexive support for the Israeli state and Islamophobia—qualities that the AIPAC audience eats up.

There is one big problem for Bloomberg, however, with his AIPAC appearance. It’s only the latest example of how thoroughly out of touch the mayor is with the Democratic Party base, which is increasingly critical of U.S. support for Israel as it descends deeper into permanent military occupation of the Palestinians and permanent apartheid rule over them. A Data for Progress poll published last year found that 67% of respondents who voted for Democrats in the 2018 midterms supported reducing military aid to Israel because of Israel’s poor human rights record. A 2018 poll conducted by the Economist/YouGov found that 37% of Americans consider Israel an ally, a figure down from the 47% that saw Israel as a friend in 2015. What’s more, people of color, a core part of the Democratic base, are significantly more likely to view Israel in a negative light. According to the poll, 43% of white people see Israel as an ally, while 22% of Latinx and 19% of Black people do.

To understand why the former New York mayor’s natural voting base is more AIPAC than progressive, it helps to start with Bloomberg’s history of support for Israel no matter what the country does.

The most telling example of this came in 2014, when Israel launched a punishing air and ground assault on the Gaza Strip, the Mediterranean coastal enclave already reeling from an Israeli blockade that decimated its economy. As Israeli warplanes wiped out entire Palestinian families and, eventually, killed over 500 children, Palestinian militants launched rockets at Tel Aviv, forcing the U.S. Federal Aviation Administration to suspend American flights to Israel.

Bloomberg, however, wanted to support Israel so bad as it immiserated the Palestinians of Gaza that he flew on an Israeli airline’s flight to Israel. As he tweeted at the time, he wanted “to show support for Israel's right to defend itself.”

Israel’s “right to defend itself” apparently included firing artillery shells at children taking refuge in a UN school in Gaza one week later, an attack that killed 20 civilians and prompted UN Secretary General Ban Ki-Moon to say, “Nothing is more shameful than attacking sleeping children.”

In early August 2014, Bloomberg was asked about the incident by CBS reporter Norah O’Donnell. His response was a master-class in Israeli talking points: He blamed Palestinian militant groups for the deaths of Palestinian children because the militants “hide among the innocent,” even though there was no evidence Palestinian militants were firing at Israel at the time from the school, according to a Human Rights Watch investigation. Bloomberg also said “Israel cannot have a proportional response if people are firing rockets at their citizens,” a talking point evincing blatant disregard for international law, which prohibits disproportionate military attacks during conflict.

In addition to his defense of Israel’s bloody assault on Gaza, Bloomberg will fit right in with the AIPAC crowd for another reason. This year’s AIPAC conference, as in past years, will feature virulent anti-Muslim bigots, among them Myles Holmes, a Christian pastor who once wrote on Twitter that Americans should wake up the danger of becoming a “sharia-compliant” country—a dog whistle to the Islamophobic movement that spreads the false claim that Muslims want to impose religious law in the United States. Another featured AIPAC speaker will be Serbian President Aleksandar Vučić, who once said, after the 1995 Srebrenica genocide of 8,000 Bosnian Muslims, “You kill one Serb and we will kill 100 Muslims.”

Bloomberg doesn’t express his own anti-Muslim bigotry in such crude terms, but as mayor of New York, he did oversee a New York Police Department program of surveillance based on the bigoted assumption that places where Muslims congregate are places where terrorist attacks will be planned out. That program of mapping the New York Muslim population was modeled on Israel’s own occupation of the West Bank.

The company Bloomberg keeps at the AIPAC conference and his own defenses of immoral Israeli conduct may be good for the AIPAC crowd, but it’s disgusting to a Democratic Party base that is committed to social justice. And this base disagrees with Bloomberg on Israel, especially his insistence that he will never condition the massive military aid package the U.S. gives to Israel on changes in behavior like stopping the blockade of Gaza or halting illegal settlement building on Palestinian land.

When the billionaire Democratic presidential candidate steps up to the stage at the AIPAC confab and delivers the usual bromides praising Israel, he will almost certainly get applause from an audience used to candidates falling over themselves to voice support for Israel.

But he shouldn’t be surprised by the reaction of progressives outside of the AIPAC conference. Israel’s far-right government and the lobby that supports it are fast losing support among the Democratic Party base. Bloomberg’s love for Israel as it continues its brutal record of bombing Gaza and imprisoning an entire population there is not going to win him many votes from the base of the party he’s running to lead.