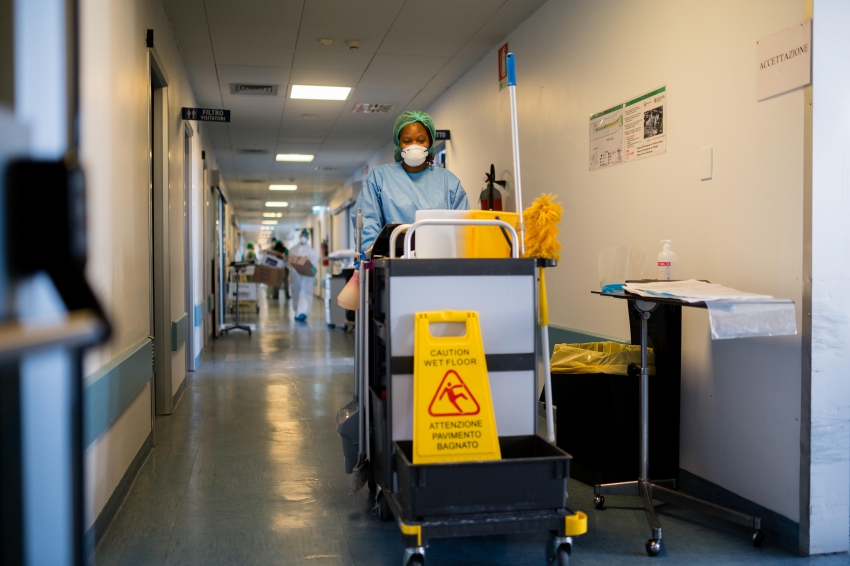 The coronavirus pandemic has only highlighted issues like inadequate staffing, low wages and insufficient equipment. (Photo by Marco Mantovani/Getty Images)

Overlooked workers are risking their lives to keep the healthcare system running. Now, they’re fighting back.

“I’m jeopardizing myself coming here every day. I love my work but just give me the tools I need to do my job.”

The hospital where Kim Smith works is supposed to be a “safe haven,” says the patient care technician at Northwestern Memorial in Chicago. But now she feels it has become a “death trap.”

Like the nurses and doctors nationwide who are risking their lives to fight the COVID-19 pandemic, Smith says she’s glad to help provide healthcare in such traumatic times. But she’s among the army of frontline healthcare service providers who, while crucial to keeping the system going, are earning much lower wages than doctors and nurses and often lack adequate healthcare and paid sick leave. And like doctors and nurses, these service workers often also lack access to personal protective equipment (PPE) like masks, even though they’re put in contact with infected patients.

On April 2, SEIU Local 73—which represents workers at University of Illinois and Cook County public healthcare facilities in the Chicago area—announced that it had secured additional compensation for its workers in the university system. Union members will get an additional $1 to $5 per hour during the pandemic depending on their job description and where exactly they work within the system. The county system serves the area’s low-income and uninsured people including the hospital at the Cook County Jail, which has turned into a COVID-19 cluster.

“The extra pay is not a really significant amount but it acknowledges that we recognize you, we know you are great, that you really care about your job and your community,” says Dian Palmer, a registered nurse and president of SEIU Local 73, which has been in contract negotiations with the University of Illinois system for about nine months.

The union SEIU Healthcare Illinois/Indiana represents workers through contracts at hospitals including Northwestern Memorial and also has at-large members in nursing homes and hospitals in the Chicago area and across four states. They’re demanding hazard pay of 1.5 times the usual rate, and added protections for their members.

Smith, a chief steward for SEIU Healthcare Illinois/Indiana, says fellow union members at Northwestern are “reaching out to me on an hourly basis” about being forced to work without proper safety equipment and protocols while receiving contradictory messages from management. Employees have been told to continue working even after they report COVID-like symptoms if they are “low-risk” for the disease, Smith says. With many of these workers living on the economic margins, and offered few paid sick days, they’re reluctant to take time off.

About 29,000 healthcare service workers in Illinois make below $15 an hour, and 22,000 of them make below $13 an hour, according to a study by the University of Illinois. Palmer notes that service job vacancies have been hard to fill at the University of Illinois Chicago hospital since they’re exempt from the city’s $15 an hour minimum wage ordinance.

Anne Igoe, SEIU Healthcare Illinois/Indiana Vice-President of the Health Systems Division, notes that with such low wages, these employees regularly work more than one job—whether picking up a second shift at a nursing home or as an Uber driver—increasing their own, and by extension patients’, risk of contacting coronavirus. She says employees are also used to working while sick, since they typically are guaranteed few paid sick days and until recent changes because of the pandemic, were penalized for taking extra ones.

Igoe says the majority of their Chicago-area members are African American and are women, many of them living in marginalized neighborhoods and with underlying health conditions that put them at greater risk of extreme illness or death from COVID-19. In Chicago, more than two-thirds of the COVID-19 fatalities and more than half of confirmed cases have been among African Americans, even though they make up less than a third of the city’s population.

In cities nationwide, as in Chicago, lower-paid healthcare service jobs are disproportionately filled by women and people of color.

Katina McDavis, 43, has been working as a housekeeper at Northwestern Memorial for over 20 years. She has diabetes, putting her at higher risk for complications from COVID-19. McDavis also lives with her daughter and two infant grandchildren, and is terrified of contracting the virus and passing it on to them.

Since the pandemic began, McDavis has been working overtime—often over 60 or 70 hours a week total, she says. She needs the extra pay and wants to help out, but that also leaves her physically exhausted and potentially more vulnerable to illness.

She and other housekeepers are given surgical masks—not the more protective N-95 masks—and told to keep them in a paper bag and reuse them, she says. In an informal survey of about 250 SEIU Healthcare members during an online meeting, 58% reported they lack sufficient PPE and 38% said they were told by higher-ups that they don’t need PPE.

“I’m jeopardizing myself coming here every day,” McDavis says. “I love my work but just give me the tools I need to do my job.”

Candice Martinez, another housekeeper at Northwestern Memorial, tested positive for COVID-19 after coming down with symptoms about two weeks ago. She feels confident she contracted it on the job, having cleaned rooms where she says she was not properly notified that patients had the virus.

“It’s hard because I’m in complete isolation and I don’t get to see my son,” Martinez says. “It’s scary knowing there’s nothing they can give me to say this will help you get past this. It’s having to battle this out on my own.”

While Martinez believes she will receive workers compensation for the time she is out of work, Igoe says that human resources officials at several hospitals have told the union that workers will not be granted workers comp for COVID-19, since they could have caught it through community transmission.

Igoe says employees often “find out co-workers tested positive through the grapevine, rather than being told by their employer that someone they worked closely with yesterday tested positive.”

A statement from Northwestern Memorial did not address specific questions but said in part that: “The health and safety of our employees, physicians, and patients is our highest priority. Since the outbreak of COVID-19, we have gone to extraordinary lengths to maintain an environment that protects everyone.”

Loretto spokesperson Mark Walker says that workers do have access to sufficient PPE supplies, the hospital follows all CDC safety guidelines, and staff who test positive for COVID-19 will be paid during their time off. But the hospital is indeed hard-pressed as it serves a largely poor, African American clientele, Walker says. At an April 7 press conference, hospital CEO George Miller, Jr. and State Rep. LaShawn K. Ford, who represents the district, appealed to the city, county, state and federal government for more resources.

“We are a small community hospital, 90% of our patients are Medicare and Medicaid meaning we’re providing services and being reimbursed at a much lower rate,” Walker said. “You take a pandemic like this and add it onto an already stretched-thin hospital, and you can reach a breaking point. We’re not there yet, but it creates additional stress on our resources and our funds. We’re trying to do everything we can to protect this community. Without additional resources, we’re going to struggle.”

Wellington Thomas is an E.R. tech at Loretto, said he goes to work each day fearing he may contract the disease.

“COVID turned our world upside down,” Thomas says. “We’re dealing with an influx of patients, the equipment we already struggled with (having enough of) is now scarce, employees are afraid to come to work…It’s not just contained areas, it’s spreading like a wildfire through the hospital—radiology, imaging, phlebotomy, blood tests.”

(The Cook County health system had not responded to requests for comment by the time this story went to press.)

At other hospitals as at Loretto, workers say the pandemic has highlighted issues like inadequate staffing, low wages and insufficient equipment that have long pushed healthcare service workers to the brink.

“Support staff like us have been the underdogs for a long time,” says Megan Carr, a respiratory specialist who runs ventilators for the University of Illinois system. “So getting hazard pay makes us feel like we are finally being recognized and respected for the work that we are doing, saving lives one breath at a time.”