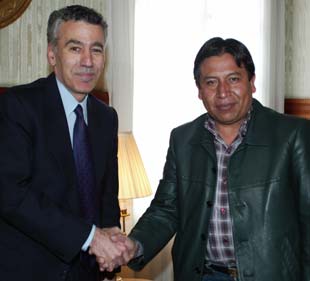 Bolivian Foreign Minister David Choquehuanca (right) shakes hands with U.S. Ambassador to Bolivia Philip Goldberg before the start of a meeting in La Paz on Feb 13. at the U.S. embassy.

Recruiting Spies in the Peace Corps

Washington’s blunder in Bolivia strains relations with the Morales government

In February, allegations surfaced that the U.S. embassy in La Paz, located in western Bolivia, has been asking Peace Corps volunteers and Fulbright scholars to provide intelligence information to the U.S. embassy about foreign nationals in Bolivia.

“It flies in the face of what the Fulbright program is all about,” says John Alexander van Schaick, 23, a Fulbright scholar from Rutgers University, who says that last year, an embassy official instructed him to report on Venezuelans and Cubans living and working in Bolivia. “We’re supposed to be here to help with mutual understanding, not intelligence operations.”

This allegation, along with a similar incident involving Peace Corps volunteers, has again called into question the U.S. role in Bolivia, testing the thickness of the ice under its feet here in the heart of the Andes.

Anatomy of a scandal

On Nov. 5, 2007, van Schaick entered the U.S. embassy in La Paz for a routine orientation in preparation for his year-long fellowship in Bolivia. After meeting with various cultural affairs officials, the 2006 Rutgers grad met with Assistant Regional Security Adviser Vincent Cooper.

“He said that he was going to give me a ‘scaled-down’ version of the normal briefing given to U.S. embassy employees,” says van Schaick. According to the scholar, Cooper explained that although Fulbright participants are not U.S. government employees, the embassy likes to keep them “under its wing.”

The meeting consisted mainly of helpful tips for the newcomer–heed caution while on public transportation, steer clear of street protests and respond appropriately in medical emergencies.

“But the part that made my ears perk up was when he casually said, ‘Alex, if, when you are out in the field, should you encounter any Venezuelans or Cubans like field workers or doctors,’ that I should report to the U.S. embassy with their names and where they live,” van Schaick explains.

His experience wasn’t an isolated incident. On July 29, 2007, Cooper visited a group of 30 Peace Corps trainees in Bolivia to give a security talk that included similar instructions, this time with respect to Cubans.

“We were immediately alarmed by the request,” said Peace Corps Bolivia Deputy Director Doreen Salazar in an interview during the initial investigation. “We stopped the meeting and made clear to our group that they had no obligation to report anything to the embassy.”

Salazar said she then lodged a complaint with the U.S. embassy and was assured that it wouldn’t happen again.

“After this mistake, our principal security officer instructed his personnel not to repeat this type of inappropriate information,” the U.S. embassy wrote in a two-page statement issued Feb. 11, three days after ABC News released the story of the Fulbright and Peace Corps incidents. “We regret any misunderstanding that this isolated incident–which happened seven months ago and which was corrected immediately–might have produced,” the embassy wrote.

The U.S. State Department has also repeatedly called the request an error and a breach of U.S. policy. U.S. volunteers and academics are not expected to be involved in U.S. intelligence operations abroad, even if the programs are government funded, as is the case with the Peace Corps program and the Fulbright scholarship, according to State Department officials.

Yet there has been no explanation as to why this happened again just three months later, especially if embassy officials were instructed not to make such requests.

The Fulbright/Peace Corps incidents brought the tension level neck-high. Within 48 hours of the story’s release, Bolivian President Evo Morales had declared Cooper an “undesirable,” and the United States had called Cooper back to Washington for an internal investigation. The Bolivian government then launched a criminal investigation into the incidents–marking the first time in Bolivian history that the government has brought criminal charges against a U.S. embassy official.

The affair’s legal gravity is indubitable. According to the Bolivian penal code, Cooper could be given up to 30 years in prison without the possibility of parole for espionage–Bolivia’s most severe sentence.

Moreover, if either van Schaick or the Peace Corps volunteers had provided information then used by the embassy in an espionage operation, they, too, could have been liable to the same prison time.

It was in this context that representatives of the two governments sat down to talk five days after the story broke. It was the sixth time in the two years since Morales took office that U.S. Ambassador in Bolivia Philip Goldberg had been officially summoned to explain an action or statement the Bolivian government found questionable.

“We accept the U.S. government’s explanations and we want to get beyond this incident,” said Foreign Relations Minister David Choquehuanca after the lengthy session. “We want positive bilateral relations.”

One of the central tenets of this cooperation was tested–and secured–just 24 hours later. On Feb. 14, the U.S. House of Representatives Committee on Ways and Means approved the extension of its trade preferences, which limits or eliminates tariffs on more than $200 million worth of Bolivian goods sold in U.S. markets annually. Up to 150,000 Bolivian jobs depend on the viability of these exports (everything from wooden window frames to Brazil nuts)–a significant figure in South America’s poorest nation.

Though the 10-month extension falls short of the two-year renewal the Bolivian government continues to lobby for, it is a significant victory given that a year ago, the Bush administration was threatening not to renew at all (as a way to punish Morales for his refusal to sign a bilateral free trade agreement).

Bolivia is one of the biggest recipients of funding for United States Agency for International Development (USAID) in the world–with more than $120 million flowing in annually, which goes toward everything from organic coffee farms to military anti-narcotic programs to health clinics to inner-city youth theaters.

Over the years, this funding has been a source of contention as allegations of a bias against Morales and his Movement Toward Socialism (MAS) Party have surfaced.

In a 2005 investigation for NACLA Report on the Americas magazine, journalist Reed Lindsay uncovered declassified internal State Department memos dated from 2002 that alleged USAID was directing its money to “help build moderate, pro-democracy political parties that can serve as a counterweight to the radical MAS or its successors.”

And recently published investigations into USAID, and specifically into its Office of Transition Initiatives (OTI), which handled “democracy promotion” work in Bolivia from 2004 until 2007, have been similarly alarming.

“In Bolivia, USAID-OTI has focused its efforts on the separatist movements in regions rich in natural resources, such as Santa Cruz and Cochabamba,” wrote Eva Golinger, a Venezuelan-American attorney, in “Washington’s Silent War on Venezuela and Bolivia,” a September 2007 article in Green Left Weekly. “The majority of the $13.3 million has been given to organizations and programs working toward ‘reinforcing regional governments,’ with the intention of weakening the Morales government.”

The Morales government has therefore made a show of its anger at USAID, declaring in August 2007, that “the door is open” for the group to leave Bolivia. But one month later, the government quietly signed a contract to renew USAID’s work here for another year.

Though big steps–such as kicking USAID out–do not seem to be on the Morales agenda, the Bolivian president has taken small steps to fulfill his promise of lessening U.S. involvement in the country.

Economically, Bolivia today is far less dependent on the United States, especially given its close relationship with oil-rich ally Venezuela, and a five-year, $1 billion deal with Iran to finance everything from gas exploration to dairy farms.

In the last few days of February, Morales was once again lambasting the U.S. embassy here for conspiring against Bolivia’s newly written constitution, which must be approved or rejected in a national referendum this year.

But even in the wake of recent scandals, Morales has confirmed his commitment to making it work with the United States.

“We would never look to break neither diplomatic nor commercial relations,” he stated at a recent press conference, despite recent “political problems.”

The ice, though constantly thinning, seems far from breaking.