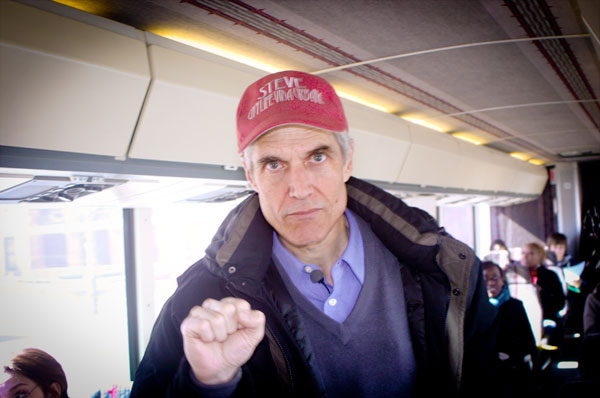 Home Is Where the Fight Is

City Life/Vida Urbana is on the frontlines of the foreclosure crisis.

The foreclosure crisis has shown no signs of abating since the recession's onset. Homeowners continue to be evicted as a result of fraudulent practices by banks and lenders. Yet few community groups have organized a serious response against banks that kick homeowners and tenants out of their homes. One exception is City Life/Vida Urbana, a housing group in Boston. Through public pressure, legal defense and

eviction blockades, the organization helps keep hundreds of families in their homes.

Steve Meacham, 62, has been a City Life organizer for the past 11 years, and involved in community and labor struggles for almost 40. He first came to Boston to attend MIT, but, radicalized by civil rights and black power struggles, dropped out in 1972. Since then, he has “never regretted” joining a variety of people's movements.

In 1977, he found a job in a shipyard near Boston and became a rank-and-file activist with the now-defunct Shipbuilders Union. The daily exposure to serious short- and long-term health hazards and constant management repression, Meacham says, made the shipyard a “school of struggle” that “made class in this country crystal clear.” He worked at the yard until its closure in 1986, when he returned to housing organizing. In 1999, he joined City Life, and throughout the recession has organized against foreclosures and evictions.

In These Times spoke with Meacham about the group's fight to keep homeowners and tenants in their homes.

City Life has a unique organizing model called “the sword and the shield.” Can you describe this strategy?

The shield is legal defense, and the sword is public protest and pressure. We use the two to stop banks from evicting people, and to get people's homes back at the current real value. The loan modifications homeowners seek through negotiations with banks are usually unsuccessful, because banks won't reduce principal–even though the banks themselves deliberately drove up the prices, knowing they would crash.

After a foreclosure, the banks want to evict everyone in the building. In Massachusetts, in the past, even if you'd done nothing wrong as a tenant, the owner could evict you. We use lawyers to make procedural defenses to slow the banks down while publicly pressuring the banks to stop the eviction and sell the building back to the occupants.

Why wouldn't banks sell homes back to the former owners without having their hand forced by public pressure?

Many times, a bank tries to evict, and the family, through an intermediate buyer, offers the bank the current real value of the building. The bank won't get any more money by evicting the family than by accepting the offer, so they're evicting these families needlessly. With public pressure, banks sometimes give in, but they won't change macro policy.

President Obama suggested two years ago that bankruptcy judges be able to reduce the principal on a first home. Currently, if you declare bankruptcy, the judge can reduce the principal you owe on your yacht or second home, but they can't reduce it on your first. Simply extending it to the type of property most people have would seem obvious, but banks fought it fiercely, using terms like “moral hazard” to explain their opposition. After the initiative failed, Sen. Dick Durbin (D-Ill.) observed, “The banks own the Senate.”

Despite widespread acknowledgement of fraud in the foreclosure process, the response from community and progressive groups around the country has been tepid. Why?

Even the phrase “fight the banks” is difficult for many groups to say because bank money is so widespread. Many community groups get grants and loans from, say, Bank of America, and are thus reluctant to fight Bank of America. Also, demanding principal reduction requires a radical analysis of the crisis' cause. Much focus has been on individual predatory loans, like adjustable rate mortgages. Those were definitely predatory, targeted at low-income communities of color. But the bigger predatory feature was the deliberate creation of a housing bubble itself. If this is the case, demanding principal reduction is justified.

Rick Santelli famously screamed on CNBC about the dangers of the government subsidizing “losers' mortgages.” What do you tell homeowners who feel that foreclosure is their fault?

People feel like they personally failed, but they're also angry at the banks, as most have gone through torturous loan modifications that haven't worked. We say, “Leave your shame at the door. Whatever you think you did wrong, it's infinitisemal compared to what the banks did.” When you realize that, it's like cutting a cancer out of your soul. Gaining that feeling is as important as the material results.

An example: We sifted through one homeowner's inch-thick pile of loan documents. She signed something stating her income was larger than it was. Of course, she never looked carefully at all the documents–no one does, otherwise closing would take all day. She even had a lawyer with her who didn't catch it. She saw the loan amount and said, “I can't afford that.” The lender said, “Sure you can. We'll refinance you.” So she agreed to the mortgage. She paid it for a year, then something happened, and she quickly went under.

The narrative of the Right is: people bought more house than they could afford. But that wasn't the case at all–people bought run-down houses in their community at prices that were intentionally inflated. Everyone told them to do it, and the banks said anything to make them do it. Banks loaned people money they knew couldn't be paid back. It was a deliberately created structure driven by banks' desire to expand the housing bubble.

When someone has exhausted all legal efforts to resist an eviction, they get a 48-hour notice in Massachusetts. We organize people to protest, and some of them block the doorway to prevent the eviction. We've done it twenty-one times over the past three years, and have been arrested three times. The banks usually back off when faced with the publicity.

How has City Life handled pressure from local law enforcement and government?

The protests are edgy, but we don't blame police. At many protests, officers approach us and say, “I've got foreclosure problems–can I give you a call?” With government generally, we've pushed policy initiatives that have been very successful. We got legislation passed last year to protect tenants in foreclosed buildings in Massachusetts. Now, banks can't evict people who were tenants before foreclosure–the banks have to allow them to pay rent. It doesn't affect the buyer after the bank sells the home, but while the foreclosing bank owns it, they can't evict a tenant for just any reason. That's a pretty significant victory.

Which groups have been City Life's biggest champions–and critics?

Almost all the grassroots organizations in Boston are involved or sympathetic. It's a remarkable campaign in that we use radical tactics and have a radical analysis, yet many people who wouldn't normally support those things are sympathetic. Some people don't believe in eviction blockades, but we work together to push legislation to make them unnecessary. The people who are openly opposed to them are small but powerful groups–banks, real-estate interests, people who think any limit on profit is a mortal sin. But there's not much outright opposition. Everybody knows the loan modification process has failed badly, and the banks get the same money they would get anyway. So what's the problem? It's hard to argue against openly.

You've been an organizer for almost four decades. Why do you continue to do it, and why with City Life?

With organizing, you are engaged in something no one can take away from you. No one can challenge your sense of yourself in the world. You can be pretty depressed about the injustices you are organizing against, but nobody can take away your ability to do it.

Throughout my organizing life, I've tried to develop an avowedly radical model of community organizing. City Life has had that model since the 1970s. They've always done effective grassroots organizing while staying active in the Left. Collaborating with other organizers here has really moved things forward. I honestly believe there's never been a better time to do radical organizing than right now.