Of all the myths that surround American Indians, none is as confounding as the misunderstanding that the federal government gave Indians their lands. Arguably it derives from the conquest myth, which would have people believe that because of military domination (and later legal domination) whatever lands and rights Indian nations do enjoy are due to the ​“benevolent supremacy” of the U.S. government. Belief in the conquest myth and benevolence of the United States underscores the tenacity of the manifest destiny narrative, but it fails to change the actual reality that all of Turtle Island (the North American continent) has been Indian land since tens of thousands of years before European invasion. And it does not change the fact that it was Indians who gave up lands to the United States in treaties, not the other way around.

The word itself — ​“reservation” — refers to the lands that were reserved for Native nations after they ceded vast swaths of their territories to the United States through treaties. Land cessions were one of two primary functions of treaties, the other being to forge peace agreements. Today the federal government refers to three different types of reservations: military, public and Indian. Indian reservations are lands that are held in trust for tribal nations by the federal government. According to the Bureau of Indian Affairs, 56.2 million acres of land are held in trust on behalf of tribal nations and individuals, with approximately 326 Indian land areas in the United States administered as federal Indian reservations, known variously as reservations, pueblos, rancherias, missions, villages and communities. Other types of Indian lands include allotted lands (individual allotments held in trust by the government) and state reservations, in which lands are held in trust for Indians by a state, not the federal government. Reservations were also created by executive order and congressional acts, and even though there are now 567 federally recognized tribal nations, not all nations have reservations. There is only one Indian reservation in Alaska (the Metlakatla Indian Community of the Annette Island Reserve in southeastern Alaska). Alaska Native groups are organized as corporations under the Alaska Native Claims Settlement Act of 1971, so while there are many Indigenous people in Alaska, their legal status is slightly different than American Indians in the lower forty-eight states.

Along with the myth that the federal government gave Indians their lands, there is another fiction that goes something like this: because Indian reservations are places of oppression they should be abolished. This fiction has been behind numerous disastrous policy decisions. The early days of the reservations (mid- to late-19 century) were oppressive in many places — especially where subsistence lifestyles had been dependent upon hunting, like in the Great Plains — because of federal policies that restricted Indians to their reservation boundaries, which were often too small to allow a subsistence hunting lifestyle. In frequent cases, treaty-guaranteed annuities and food rations were never received, resulting in starvation and conditions of extreme poverty, especially as traditional political economies became supplanted by Euro-American capitalism. Viewing traditional Native lifestyles as backward and uncivilized, the federal government enacted a policy of forced assimilation to break up communal landholdings and imposed a system of private property ownership through the General Allotment Act of 1887 (the Dawes Act). The law turned out to be no more than a massive land grab for the United States that resulted in the loss of two-thirds of the lands reserved for Indians by treaties and increased reservation poverty rates. Poverty intensified also when the federal government embarked on a campaign to eradicate the massive buffalo herds on the plains (to force a sedentary lifestyle), and when Indians were defrauded out of their individual allotments, leaving many penniless and landless.

By the early 20th century, a commission to study the deplorable conditions on the reservations found Indian poverty a direct result of failed government policies. The Meriam Report of 1928 recommended (among other things) that Native nations be allowed to be more self-governing, signaling a new policy direction, which would be manifest with the passage of the Wheeler-Howard Act (the Indian Reorganization Act) of 1934. While a step in the right direction, this still kept Indians tightly tethered to the paternalism of the U.S. government. Within 20 years, with the political winds blowing in a far more conservative direction under the postwar (and emerging Cold War) Eisenhower administration, Congress pushed for a new policy in a renewed attempt to forcibly assimilate Indians into mainstream society. This time assimilation was framed in terms of ​“liberating” Indians from the oppressive control of the federal government, which it proposed to do by eliminating the trust relationship, effectively freeing the United States from its own treaty obligations. House Concurrent Resolution (HCCR) 108 was passed in 1953 in an effort to abolish federal ​“supervision” over Indians. By eliminating the trust responsibility, the United States would terminate Indian reservations by converting them to private ownership once and for all. Under HCR 108, Congress also established the relocation program — a jobs program that gave Indians a one-way ticket from their reservations to low-paying jobs in big cities such as Chicago, Los Angeles, San Francisco, Minneapolis, Seattle and New York — all in an attempt to ​“negate Indian identity.” In the long run, relocation resulted in a wholesale population transfer, so that more Indians now live in cities than on reservations. The federal trust relationship was terminated for 109 tribes, affecting 1.3 million acres of Indian land (falling out of Indian hands) and an estimated 12,000 Indians.

The words ​“termination” and ​“relocation” to this day are enough to make an Indian’s blood run cold. The Colville reservation is often looked to in termination studies as a case where termination was narrowly averted in a highly contentious 20-year intra-tribal battle. Because tribes were allowed to vote on whether or not to accept termination, it is a study not only in the ways Native nations exercised choice but also a retrospective view on how disastrous termination was for so many, as it would have been for the Colvilles. It illustrates that even with the problems associated with the federal trust relationship and the paternalistic nature of aboriginal title, reservations are still considered homelands for those who are born and raised there — and even for some who were not.

Accompanying the various assumptions about reservations as undesirable places that should be abandoned is another common belief related to Native authenticity and identity, that the only real Indians today are from reservations. The implication is that Native people who are from cities are not authentically Native, presumably because they are more acculturated to dominant white society (i.e., assimilated) and cut off from their Indigenous cultures of origin. Native scholars and writers have vigorously challenged this idea for generations, in both fiction and nonfiction. While reservations are geographic centers that link Native people to their Indigenous ancestry and historical continuity, Renya K. Ramirez conceptualizes urban Native spaces as ​“hubs” of culture that facilitate connections between reservations and cities. Such Native spaces include Indian centers, powwows, sweat lodges and other ceremonies, and any other kind of places and activities that gather Native people together in expressions of indigeneity. In traveling between cities and reservations, Native identity is enacted and reinforced. Ramirez writes, ​“This constant movement and interaction disrupts the idea of Native cultural identity as a fixed, core essence. In contrast, urban Indian identity, according to the hub, is flexible and fluid. Thus, Native Americans’ interactions with each other in the city and on the reservation can transform and rejuvenate tribal identity.”

As people living in diaspora, the hub emphasizes urban Indians’ ​“strong rooted connection to tribe and homeland” and demonstrates the ​“potential for political power as Native men and women organize across tribal lines.” The Red Power movement of the 1960s and 70s, for instance — born out of the Alcatraz Island occupation in San Francisco and the formation of the American Indian Movement in the mean streets of Minneapolis — displays the way urban political organizing had far-reaching positive effects for both city and reservation Indians. Finally, the idea of hubs also applies to Indigenous conceptions of transnationalism (as opposed to pan-tribalism), where Indigenous nationhood is underscored. Sovereignty and self-determination are affirmed as political principles that differentiate Native peoples from other racial and ethnic groups, while it decenters the nation-state as the default arbiter of civic belonging and national identity. 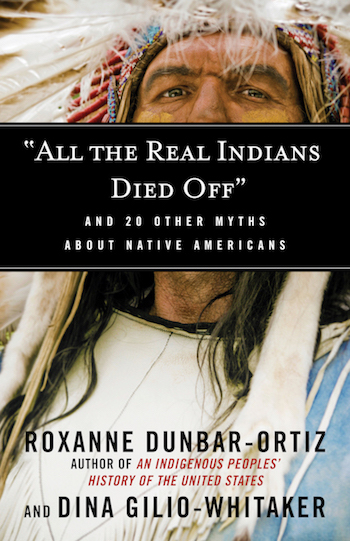 Excerpted from ​“All the Real Indians Died Off”: And 20 Other Myths About Native Americans by Roxanne Dunbar-Ortiz and Dina Gilio-Whitaker (Beacon Press, 2016). Reprinted with permission from Beacon Press.

See the options
Roxanne Dunbar-Ortiz grew up in rural Oklahoma, the daughter of a tenant farmer and part-Indian mother. She has been active in the international Indigenous movement for more than four decades and is known for her lifelong commitment to national and international social justice issues. Dunbar-Ortiz is the author or editor of seven other books, including Roots of Resistance: A History of Land Tenure in New Mexico. Her most recent book, An Indigenous Peoples’ History of the United States (Beacon Press, 2014) was the 2015 Recipient of the American Book Award and the winner of the 2015 PEN Oakland-Josephine Miles Award for Excellence in Literature. She lives in San Francisco.Dina Gilio-Whitaker (Colville Confederated Tribes) is an award-winning journalist and columnist at Indian Country Today Media Network. A writer and researcher in Indigenous studies, she is currently a research associate and associate scholar at the Center for World Indigenous Studies. She lives in San Clemente, Calif.
Have thoughts or reactions to this or any other piece that you'd like to share? Send us a note with the Letter to the Editor form.
Similar articles
Rural America
The Curious Case of Carter County: How a Small Town in Montana Stopped Shrinking
On the Great Plains, these days, rural towns tend to wither. But in remote eastern Montana, one community is bucking that trend. How?
Eric Dietrich
Rural America
Study: “Salmon Remain on the Brink of Extinction. And Time Is Running Out.”
Between dams and warming waters, West Coast populations of wild salmon have plunged by 98%. What will it take to stop the decline?
Tara Lohan
Rural America
The EPA Responded to a Respiratory Virus by Relaxing Pollution Controls
Major polluters were deemed 'essential.' Under EPA policy, environmental and safety inspectors were not.
Victor B. Flatt and Joel A. Mintz
Join our newsletter
Fearless journalism, emailed straight to you.
Subscribe and Save 66%