The GMO American Chestnut: Restoration of a Beloved Species or Biotech Trojan Horse?

About a century ago, the American chestnut tree was attacked by the invasive fungal pathogen Cryphonectria parasitica. The fungal blight drove the tree — an estimated 3 – 4 billion once grew in the United States — to functional extinction.

Now, scientists at the State University of New York College of Environmental Science and Forestry (SUNY ESF) claim to have genetically engineered a resistant American chestnut variety. They aim to petition the required regulatory agencies (USDA, FDA, EPA) for approval of their genetically engineered chestnut in the near future, with the stated goal of restoring the species to nature.

If approved, the GE chestnut would be the first GE forest tree species to be planted in forests with the deliberate intention of spreading freely. Monitoring or reversing their spread, once released, would likely be impossible due to the hampered ability to perform valid risk assessments of the potential consequences of GE American chestnuts as a result of our lack of knowledge about the ecology of both the American chestnut and its forest ecosystems. And since American chestnuts can live for over 200 years, risk factors may change over the tree’s lifetime in unpredictable ways.

After experimenting with various genes, they have settled on a sequence derived from wheat that causes the tree to produce the enzyme oxalate oxidase (OxO). This enzyme inhibits the spread of the fungus once infected, making it less lethal to the tree. In their promotional efforts, SUNY ESF scientists are careful to highlight that OxO is common, and that the gene comes from ordinary wheat-conjuring images of saving the chestnut with nothing more than a tasty slice of buttered toast.

But will the OxO trait even enable restoration of the species? This is unlikely. First of all, engineering resistance to fungal pathogens in general has proven challenging. Biotechnologists have long struggled to do so with familiar common crops that, unlike forest tree species, they have plenty of prior experience with. Despite this experience, and for no lack of effort, only a single fungal pathogen resistant crop is commercially available (the Simplot potato, resistant to late blight, the fungus responsible for the Irish Potato Famine of the mid-19thcentury). The problem is that fungi are very good at finding new ways to evade plant defenses, hence making durable, effective resistance extremely difficult. Additionally, when plants invest energy in defending themselves against a pathogen, their growth is often stunted or otherwise compromised, and they can become more susceptible to other pathogens or stresses.

Furthermore, while SUNY ESF’s OxO engineered chestnut trees appear to be resistant to the blight, only young trees in controlled lab and field trial conditions have been tested, with the oldest trees tested being 15-years old. Yet chestnuts can live for up to 300 years, during which time they may experience diverse conditions, including weather extremes, insects and pathogens, that could affect the expression of the OxO trait or other characteristics of the trees. We cannot reasonably assume long term durable blight resistance in natural forests based on extrapolation from results on very young trees under controlled and laboratory conditions.

Even the SUNY scientist most involved in developing the OxO engineered chestnuts, William Powell, acknowledges that long term stable resistance to Cryphonectria based on the OxO trait alone is unlikely to succeed. He said, ​“Eventually we hope to fortify American chestnuts with many different genes that confer resistance in distinct ways. Then, even if the fungus evolves new weapons against one of the engineered defenses, the trees will not be helpless.”

Scientists agree that restoration of the chestnut would require the stacking of multiple traits, including resistance to other pathogens. The OxO trait alone will not restore American chestnuts.

So why claim otherwise? Why rush the GE chestnut into regulatory review when even its own creators recognize it cannot fulfill the goal of species restoration? Proponents of GE, who described their engineered chestnut as ​“nothing but a wheat gene to restore a beloved iconic species,” are using their GMO chestnut as propaganda to convince the public that genetically altered trees can be used as a tool of conservation. This is a strategy that biotechnology industry proponents expect will soften opposition and open up the potential for commercializing a wide array of GE trees.

The American chestnut is a much beloved, iconic, ​“perfect tree.” Prolific nuts reliably provided nutritious and delicious food and fodder for livestock. The rot resistant, easy to work with and aesthetically pleasing wood was prized by the timber industry. Cryphonectria, the fungal invasion that blighted the chestnut, was a catastrophe for the forests, wildlife and human economies, especially those of rural Appalachia where the seasonal nut harvest was key source of income and sustenance. Restoring the American chestnut is a long-held dream for some. 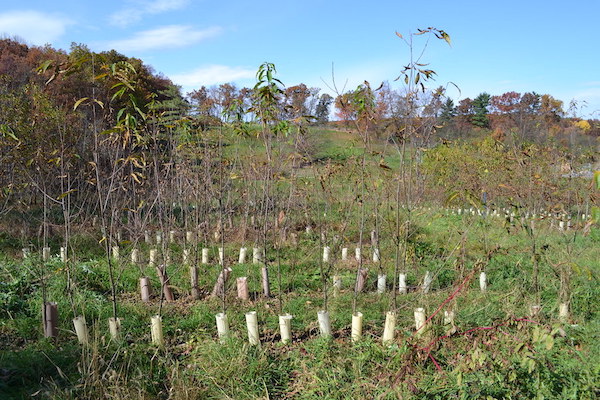 The American Chestnut Foundation (TACF) is reintroducing a hybrid version of the tree to its natural habitat. Volunteers in the Pennsylvania chapter of TACF planted this orchard in Penn State University. Photo credit (Joe Blowe / https://www.flickr.com/photos/56775593@N05/6281793233​ / Creative Commons)

The chestnut is very explicitly referred to in terms of its value for public relations and as a ​“test case.” Maud Hinchee, a former chief technology officer at tree biotechnology company ArborGen Inc. who had previously worked for Monsanto, stated, ​“We like to support projects that we think might not have commercial value but have huge value to society, like rescuing the chestnut. It allows the public to see the use of the technology and understand the benefits and risks in something they care about. Chestnuts are a noble cause.”

Scott Wallinger, a former vice president vice president of the paper corporation MeadWestvaco (now Westrock) said back in 2005, ​“This pathway [promoting the GE chestnut as forest restoration] can begin to provide the public with a much more personal sense of the value of forest biotechnology and receptivity to other aspects of genetic engineering.”

Even the American Chestnut Foundation said, ​“If SUNY ESF is successful in obtaining regulatory approval for its transgenic blight resistant American chestnut trees, then that would pave the way for broader use of transgenic trees in the landscape.”

What ​“broader use of transgenic trees” can we foresee? A review of the literature on forest biotechnology reveals that most tree biotechnology research is focused not on addressing forest health for the public good, but on ways to engineer trees for commercial and industrial processes and profitability.

Meanwhile, with increasing awareness of the dangers inherent to using fossil fuels, efforts to convert wood into liquid transportation fuels have so far largely failed to attain commercial scale in spite of massive investments. Turning trees into biofuels, bioplastics, etc. largely depends not only on genetically engineering specific characteristics into the trees, but also on engineering microbes that produce enzymes needed to break down, access and ferment the sugars in wood. In sum, biotech has much riding on winning over public opinion on GE trees.

This is why such entities as Duke Energy, ArborGen Inc. and Monsanto, as well as various multinational timber corporations, are among those funding or promoting the GE chestnut. The Forest Health Initiative, which receives funding from some of the above, and has provided large grants to the SUNY ESF research, said in a report, ​“Biotech trees will find their place in this world, providing fiber, fuel, and even sustainable comfort food (e.g. biotech chestnuts roasting on an open fire). This is an industry to watch as it evolves toward responsible use and takes its place in the pipeline of sustainable biotech products.”

Enthusiasm for GE American chestnuts has so far been underwhelming. Recently, board members of the Massachusetts/​Rhode Island chapter of the American Chestnut Foundation Lois Breault-Melican and her husband, Denis M. Melican, who had worked for over 16 years on backcross breeding of resistant American chestnuts, resigned in protest against the organization’s embrace of SUNY ESF’s GE American chestnut. They said,​“We are unwilling to lift a finger, donate a nickel or spend one minute of our time assisting the development of genetically engineered trees or using the American chestnut to promote biotechnology in forests as any kind of benefit to the environment. The GE American chestnut is draining the idealism and integrity from TACF.”

Indeed, public opinion has long been opposed to GE trees in general, and remains a significant barrier to their release. A number of protests have taken place around the world where GE trees have been tested. In Brazil in 2016, women in the Landless Workers Movement have destroyed GE tree seedlings belonging to FuturaGene Ltd. In the United States, opposition to the GE American chestnut is being led by The Campaign to Stop GE Trees.

In the wings, and waiting to follow in that newly forged path, are a host of other GE forest tree species, engineered for commercial industrial purposes. Natural forests, meanwhile, are rapidly declining, even as climate science dictates that protecting and restoring forests is a crucial part of regaining carbon balance. Yet logging, even of the precious remaining old growth forests, continues largely unabated, often subsidized with public funding. Replacing real forests with tree plantations, and then referring to them as ​“planted forests,” conceals the fact that tree plantations are more akin to corn fields than forests. They often displace natural forests and rural communities, are monocultures lacking biodiversity, are doused with herbicides and agrichemicals, rapidly drain fresh water sources, and are designated for fast growth and short rotation mechanical harvesting.

Debates about forest health, and the potential for biotechnology to provide solutions, are irrelevant when underlying drivers of forest demise are not addressed. If we are seriously concerned about protecting forest health, then reigning in those underlying drivers of forest destruction is the real solution-not genetically engineering trees or replacing diverse natural forests with industrial plantations.

​“The GMO American Chestnut: Restoration of a Beloved Species or Biotech Trojan Horse?” was first published on inde​pen​dentscience​news​.org and is reposted on Rural America In These Times with permission.

Rachel Smolker is codirector of Biofuelwatch. She is on the steering committee of the Campaign to Stop GE Trees, and is on the board of the Global Forest Coalition. She has a Ph.D. from the University of Michigan and lives in Vermont.Anne Petermann is the co-Founder and Executive Director of Global Justice Ecology Project and the co-founder and Coordinator of the international Campaign to STOP Genetically Engineered Trees.
Have thoughts or reactions to this or any other piece that you'd like to share? Send us a note with the Letter to the Editor form.
Similar articles
Rural America
Death of a Sales Barn: How Corporations Took Over Our Food System
A new report explains how a handful of agribusiness firms came to dominate U.S. agriculture, how they’re ruining rural America, and how we can stop them.
Zoe Pharo
ViewpointRural America
For the Nez Perce, a Proposed Gold Mine Is a Symbol of Broken Promises
The U.S. government stole Nez Perce treaty land to make way for gold miners in the 1860s. A century and a half later, gold mining again threatens the tribe’s homeland.
Marcie Carter
Rural America
Rural Minnesota Is Getting Less White. Meet the Progressive Women Running to Make the Government Less White, Too.
Immigrants, come to work meatpacking and farm jobs, have rejuvenated Nobles County. These women aim to make sure they're represented.
Sarah Lahm
Join our newsletter
Fearless journalism, emailed straight to you.
Subscribe and Save 66%