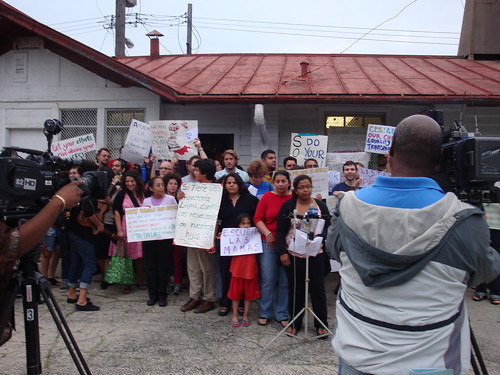 Parents from Whittier Elementary hold a press conference outside of the school's contested fieldhouse on June 22, 2011

"Viva La Casita!" This was the message broadcast loud and clear from the fieldhouse turned community center and library outside of Whittier Elementary in Chicago's Pilsen neighborhood on Wednesday.

The struggle over the future of the fieldhouse, fondly dubbed La Casita, took yet another drastic turn Wednesday morning. Chicago Public Schools (CPS) officials brazenly attempted to hoodwink Whittier parents by luring them downtown under the guise of testifying on their plans for the fieldhouse just as construction crews and Chicago Police Department (CPD) members moved onto the disputed area to carry out their own plans: demolishing a special education classroom within the already overcrowded school building to make room for a smaller library.

When parents and community members got word that construction crews were erecting fences around the school, they flocked back to the fieldhouse to stage an occupation. Once the fences were up, CPS and CPD members left the premises and the enlivened parents regrouped to plan their next steps. Within just a few short hours, the parents rallied over 50 people to the fieldhouse and organized an impromptu news conference, attended by at least two major TV news outlets, laying out their grievances and demanding that CPS officials negotiate in good faith and put the needs of the children first.

"Stop the work order!," demanded Lisa Angonese, a Whittier Elementary parent, adding, "Where are these children going to go?"

The suspect actions of CPS follow months of planning and organizing by the parents of Whittier Elementary to institute a plan that would renovate the fieldhouse into a new, more environmentally friendly, library and community center, a welcome relief for a community suffering from some of the highest pollution levels in the country, linked directly to exploding rates of asthma and premature deaths.

"This will be a green building for Pilsen," stated parent Evelyn Santos. "We worked on this proposal for months with architects, and got $564,000 allocated for the renovation of the fieldhouse. Construction inside of the school is a misuse of funding already allocated by our political representatives."

Last fall, with CPS officials threatening to demolish the fieldhouse and deny Whittier a library altogether, parents and community members staged a 43 day and night sit-in and occupation of the fieldhouse, successfully preventing the demolition. The standoff came to an end in October when then CPS CEO Ron Huberman met with a group of Whittier parents and negotiated a tentative agreement wherein the fieldhouse would be renovated instead of demolished, and leased out to the parents for just one dollar per year.

The occupation was and continues to be a forceful exercise in participatory democracy, with parents utilizing direct action strategies to effectively combat the powerful bureaucracy of CPS to fight for the needs of their children and neighbors.

In the months that have followed since the initial agreement, the parents have continued to advocate for the green renovation of the fieldhouse into a library, so as to save the special ed classroom inside the school.

"This demolition would displace children and special needs students," claimed Stanos. Angonese echoed this concern, pronouncing "I have a child with ADHD and special needs, where will they learn?"

Santos added that if CPS used the full amount of funding to construct a small library in place of the school's current special ed classroom, as they have planned, "it would cost around $516 per square foot, making it the most expensive library in the history of Chicago."

Much of the criticism from the parents was leveled at new CPS CEO Jean-Claude Brizard, appointed by newly elected Chicago Mayor Rahm Emanuel. Brizard has recently announced that he plans a green initiative for CPS and would like to see more parent involvement.

"This would fit in perfectly with the green initiative," contended Angonese.

"He wants parent involvement, we are here, we are involved," affirmed parent and organizer Araceli Gonzalez to much applause. "We are ready to negotiate. I will take my day off from work and will be here at your convenience."

On Thursday, the parents decided to revive the sit-in at the fieldhouse and are planning to deliver a letter to 25th Ward Alderman Danny Solis demanding that he meet with them to discuss the situation. They have also planned a community meeting for Thursday at 6pm at the fieldhouse to update community members and allies and decide how best to continue the fight for the Whittier students and La Casita.