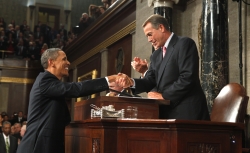 In his speech to a joint session of Congress on Thursday, President Obama refused to advocate rasing taxes on U.S. based multinational corporations.

It is a concept that is anathema to the leadership of both major political parties in the United States. The institutions that hold the most legislative sway, having been empowered, centralized and apotheosized via the government over the past three decades, consider it a grave threat to the financial oligarchy they have helped establish.

But despite this powerful opposition, increasing taxes on corporations is not only the most egalitarian, but also the wisest economic route to ultimately creating jobs in this country.

The idea that raising tax rates on corporations could actually create jobs in the U.S. may sound absurd, thanks to the success major corporate powers have enjoyed in shaping the narrative around tax policy. Tune into most any mainstream news channel and you will hear repeated ad nauseum the assertion that businesses are not hiring because the impediments in this country are too high, as our corporate tax rate is one of the highest in the world. The implication, if not outrightly stated conclusion, is that in order to stimulate hiring by the private sector, corporate taxes need to be lowered.

This claim is the real absurdity—as a new report from the Greenlining Institute makes clear. The report, entitled "Corporate America Untaxed: Tax Avoidance on the Rise", lays out in striking detail how U.S. corporations are increasingly grifting the tax system—and reaping huge rewards.

The official corporate tax rate in the U.S. stands at 35 percent. If this number represented a legitimate rate it would be the second highest in the world, behind only Japan. However, the "U.S. collects less in corporate taxes as a share of GDP than 24 out of 26 industrialized countries" including Germany, the U.K., and South Korea—and the effective tax rate could be anywhere from 25.2 percent to as low as 18.4 percent. Between 2008-2010, 12 major corporations paid an effective tax rate of negative 1.5 percent, actually making billions of dollars off of the government through tax subsidies on top of their $171 billion in profits.

How could there be such a gaping disparity in these numbers? Because the U.S. has one of the most easily manipulatable tax systems in the world—and the companies that manipulate the system the most continue to be rewarded with ever-increasing levels of taxpayer money by the government—to the tune of $89.6 billion in 2010 alone.

The manipulation takes place through corporations holding subsidiaries in tax havens (a.k.a. financial privacy jurisdictions) where they claim much (and often most) of their profits, thereby avoiding the U.S. tax rate despite being able to exploit U.S. tax deductions, all the while receiving taxpayer-funded contracts.

This process, illustrated most insidiously by the "Double Irish Dutch Sandwich" technique instituted by Google Inc., not only allows but actually encourages U.S. corporations to avoid tens of billions of dollars in U.S. corporate income taxes, money that would otherwise go to the government to help pay for much needed federal programs that are currently seeing their funding slashed. And while austerity measures aimed at the poor and shrinking middle class are currently being advanced by U.S. legislators—measures that a new U.N. study claims will help tank the global economy—the $60 billion that corporations avoided in U.S. taxes in 2010 would be enough to "pay 1.2 million public school teachers for a year." At a time when public sector workers are being laid off at an accelerating pace, such as increase in government coffers would go a long way toward stemming the domestic jobs crisis.

Corporate tax avoidance is not a new problem. Politicians, including President Obama, have been railing against corporate loopholes and gimmicks for years.

In his speech to the joint session on Thursday, Obama stated:

I'll also offer ideas to reform a corporate tax code that stands as a monument to special interest influence in Washington. By eliminating pages of loopholes and deductions, we can lower one of the highest corporate tax rates in the world. Our tax code shouldn't give an advantage to companies that can afford the best-connected lobbyists. It should give an advantage to companies that invest and create jobs here in America.


This call to eliminate corporate loopholes is a welcome one, yet nothing has been done to curtail this system, by Obama or Congress. In fact, the Treasury Department is currently weighing a proposal to eliminate many overseas taxes on U.S. based corporations. What's more, Obama, in a flourish of politicking, cited lowering corporate taxes as his ultimate goal, not raising them, and his own self-appointed deficit-reduction commission has recommended cutting the rate to as low as 26 percent.

For there to be real pressure put on corporations to start paying the levels of taxes necessary to help maintain government programs and social services in this country, corporate taxes need to be raised, loopholes need to be closed and, most important to stimulating U.S. job creation, corporations must be disincentivized from shipping jobs overseas.

No Country for Corporations: Jobs Expatriate

You might wonder why, if corporations are so lavishly exploiting the U.S. tax code, employment is not rising to any considerable degree. It is in large part because along with the trend of companies using foreign subsidiaries to park their profits, they are similarly hiring workers abroad where standards are lower and labor is cheaper.

This also is no new development, but it is a trend that has been surging in recent years. According to the Commerce Department, over the past decade U.S. based corporations have hired over 2 million workers abroad, while shedding close to 3 million American jobs. The Economic Policy Institute reports that of over 2 million jobs created by American companies in 2010, less than half were in the U.S.

Corporate lobbyists contend that this can all be changed if the U.S. government simply institutes a "repatriation holiday" wherein corporations would bring their foreign profits back to the U.S. to invest in job creation, as long as the tax rate drops down to near 5 percent. If this doesn't already sound like corporations trying to hoodwink the government into allowing them to avoid taxes with no strings attached, one needs only to look back to 2004 when such a holiday was enacted—and "92 percent of the more than $300 billion that U.S. companies brought home went to stock buybacks and shareholder dividend payments, not to creating more jobs." After all, corporations have no investment in serving American interests, or the interests of the jobless: they are solely profit driven. Reducing regulation and taxes will ensure a race to the bottom, further depressing employment and labor standards.

The most effective proposal to solve this dilemma is to legislate a "pure worldwide tax system" as laid out by Citizens for Tax Justice. Very straightforwardly, "This would mean that any profits of a U.S. corporation, no matter where they are generated, would be subject to U.S. tax, so the corporation would not gain tax advantages by moving jobs abroad." This is genuinely the only approach capable of restoring American "competitiveness": As long as corporations can avoid U.S. taxes and increase their profits by moving their operations, profits, and hiring abroad, they will continue to do so.

As employment continues to stagnate while corporate profits skyrocket, the unsustainability of the current system will become evermore obvious. Politicians in this country, their campaigns bankrolled by these corporate interests, will continue to point to other bogeymen as the real sources of the problem; unions, public employees, welfare beneficiaries, and, of course, a corporate tax rate they claim is too high. It is and will remain incumbent upon those fighting for an effective solution to the jobs crisis from the grassroots to push back against the popular narrative and instead advocate increasing corporate taxes to create jobs.