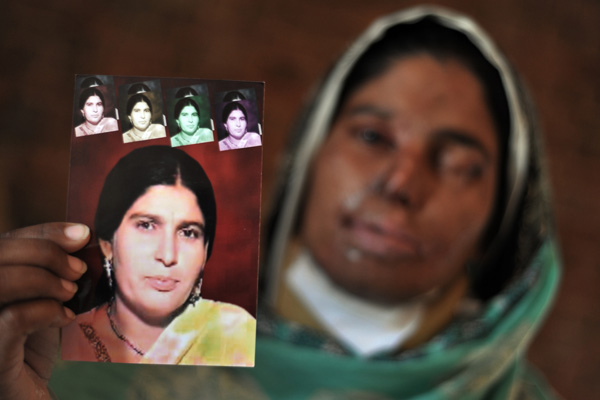 Acid attack victim Asiya Bibe, 35, poses with a portrait before her disfigurement at her residence at Bahawalpur district in Multan, Pakistan, on March 16, 2012. (Photo BAY ISMOYO/AFP/Getty Images)

Their faces are hideously vandalized and disturbingly devoid of expression. Plastic surgery can help only so much. Each woman bears the unique mark of a singularly grotesque act of violence: an acid attack by a husband hell-bent on destroying his wife's future.

They are the subjects of the documentary Saving Face, the first Pakistani film to win an Oscar. Victims, to be sure—some feel like "a living corpse," as one woman told the BBC this week.  But they are also the heroines of a movement to put destructive men in jail, filmmaker Sharmeen Obaid-Chinoy said Wednesday after a screening of Saving Face in Chicago put on by the Chicago Council on Global Affairs. The film still hasn't been broadcast in Pakistan, where Obaid-Chinoy lives, but will be next month, she said. (Bootleg copies have already been widely circulated in the country.)

"There are people in Pakistan who always say films like this should never be made. The more people that are uncomfortable, the more successful I feel I've been," Obaid-Chinoy said during the Q&A event. She's certainly successful as a filmmaker—few win Oscars, and few are named to Time's annual 100 Most Influential People list by age 33, as she was this week (by Angelina Jolie, no less, something Obaid-Chinoy joked about.)

But it's far from clear if things are actually getting better for women in Pakistan. Saving Face has undoubtedly brought unprecedented popular attention to the horrific violence, just as Pakistani acid attack victim Fakhra Younas did when she jumped to her death from her suburban Rome apartment building on March 17, 12 years and 38 rounds of surgery after a man melted her face with acid. Younas' coffin was met in Karachi by crowds of grieving supporters, The New York Times reported, and has spurred calls for change:

In Parliament, lawmakers vowed to take action, while one political leader called for a criminal investigation into the case to be reopened. But legal experts were skeptical that would happen, because the man Ms. Younas long accused of the attack — her ex-husband, Bilal Khar — was acquitted at trial nine years ago.

The number of acid attacks reported in Pakistan has grown in recent years—from 65 in 2010 to 150 in 2011. A great number of the attacks occur in southern Punjab, a part of Pakistan where men attack with general impunity, Obaid-Chinoy said. "Most women would never speak out against violence that's happened to them in that area," she said. "They somehow feel it's part and parcel of life."

Pakistan's National Assembly unanimously passed a bill legislation in May 2011 requiring sentences of 14 years to life (and an $11,100 fine) for the crime. But is the new law being enforced? Not really, although the high point of Saving Face is the sentencing of a husband to two life terms, the first time the law had been enforced. The BBC reported Thursday:

But most attackers still get off scott free, according to Marvi Memon, the former MP who sponsored the new law. "Even if he [the attacker] gets caught, he'll pay police off and he'll get away with it in most parts of Pakistan," she said. ... Memon blames a lack of political will to implement the law. "It's very difficult to get the police to co-operate with the women," she said, "because they are under no pressure to do so."

The government admits it needs to do more for acid victims, and says implementing the new law is a major challenge. "Passing the legislation was a first step," said Shahnaz Wazir Ali, a goverment adviser, "but how do cases get to trial speedily? That's the part we still need to work on. We need to sensitise the police, the lower courts and even the legal community."

Obaid-Chinoy, whose other films include Pakistan's Taliban Generation and Afghanistan Unveiled, insists that things are getting better for women. "Yes, the problem is horrible. But people are working to change it," she said. "People are now talking about the problem."

It appears lawmakers may soon do more than just talk. The "Acid and Burn Crime Bill," which would strengthen police investigations of accused acid attackers and provide victims with better treatment, is moving closer to a vote in Parliament.

Obaid-Chinoy, who grew up in Karachi and recently moved back there with her husband and daughter—she called on educated Pakistanis to not leave their country after the screening—said another crucial step forward is to regulate the sale of acid. Banghladesh did this last decade, and its annual acid attack rate has fallen 80 percent over the last 8 years, she said, from 500 to 100.

"Pakistan must do that," she said. "That is something we're pushing toward."