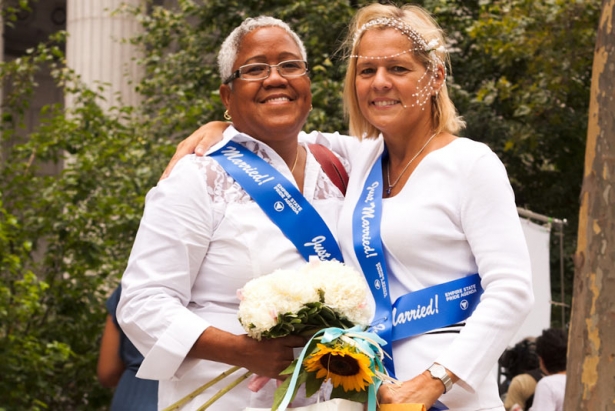 Today, a federal appeals court in Manhattan became the second to deem the Defense of Marriage Act unconstitutional.

“Section 3 of DOMA violate[s] the equal protection because there was no rational basis to support it,” said the ruling.

In May, a federal appeals court in Boston first said that the law, which prohibits same-sex couples from receiving the same legal recognition and benefits as straight couple, violates the Constitution.

The Manhattan case was filed by Edith Windsor, who sued the government in 2010 over a $363,000 federal estate tax she was ordered to pay after Thea Spyer, her partner of 44 years who she married in Canada in 2007, died. Had she had been married to a man, she would not have faced such a tax.

In the 2-1 majority ruling, Judge Dennis Jacobs of the 2nd U.S. Circuit Court of Appeals struck down a section of the law that says:

In determining the meaning of any Act of Congress, or of any ruling, regulation, or interpretation of the various administrative bureaus and agencies of the United States, the word 'marriage' means only a legal union between one man and one woman as husband and wife, and the word 'spouse' refers only to a person of the opposite sex who is a husband or a wife.

The final decision on whether DOMA is constitutional is expected to be made by the Supreme Court in the next year.

He said the law was written so broadly that it touches more than a thousand federal laws. "Homosexuals are not in a position to adequately protect themselves from the discriminatory wishes of the majoritarian public," Jacobs wrote.

He rejected arguments by supporters of the law that it was intended to limit new categories of eligibility for federal funds, promote uniform administration of federal law, protect traditional marriage and encourage responsible procreation.

"Even if preserving tradition were in itself an important goal, DOMA is not a means to achieve it," he said.

Michael Keegan, president of People For the American Way, said in a statement about the ruling:

Every federal court that has reviewed DOMA’s section 3 has found that it violates our constitutional principles. This should be no surprise. DOMA hurts gay and lesbian married couples by denying them some of the most basic protections of marriage, and it does so for no reason but prejudice against LGBT families. Our Constitution guarantees all Americans equal protection under the law, and DOMA clearly violates that principle.

House Speaker John Boehner has wasted nearly a million and a half taxpayer dollars on defending this indefensible law. I am confident that the Supreme Court would not let DOMA stand, but I hope that they never have to review it. Most Americans don’t want to hurt their gay and lesbian neighbors, and we’ve seen over and over again that DOMA does real harm to real people. Congress must recognize the harm that DOMA has done and repeal it before it hurts more legally married Americans.