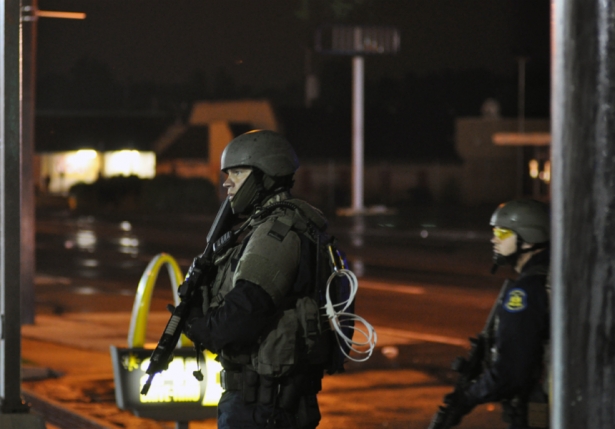 On Saturday, August 9, a Ferguson, Missouri police officer named Darren Wilson killed Michael Brown, an unarmed black teenager, two days before he was set to begin college. The police claim that Brown reached for the officer's gun after a verbal altercation, and then fled, at which point the officer engaged in lethal force against the unarmed boy. The police autopsy is not yet available to the general public, but an independent autopsy released on August 18 showed a pattern of bullet wounds that some activists view as support for Brown's hands being up in a surrender position. U.S. Attorney General Eric Holder then ordered a third autopsy as a part of a federal investigation.

After Ferguson residents assembled for a candlelight vigil on Sunday, a heavy police presence provoked rioting and destruction of property among some of the largely non-violent protesters. The protests continued nightly, as did police antagonism, reaching another apex on Wednesday the 13, when riot police illegally ordered peaceful protesters and media alike to turn off their cameras and disperse, before descending on them with tear gas and rubber bullets.

After several days without comment beyond a milquetoast letter offering "deepest condolences to [Brown’s] family and his community" and promises of an investigation, President Obama finally spoke on Thursday.

Obama began the speech with an explanation of the situation in Iraq, saying, “Last week I authorized two limited missions: protecting our people and facilities inside of Iraq, and a humanitarian operation to help save thousands of Iraqi civilians stranded on a mountain."

After the Iraq update, the discussion about the events in Ferguson felt tacked on haphazardly, as audiences were reminded "that now’s the time for all of us to reflect on what’s happened and to find a way to come together going forward."

While Obama did manage to declare that “it’s important to remember how this started. We lost a young man, Michael Brown, in heartbreaking and tragic circumstances", he never hinted at what those circumstances were—that an unarmed teenager was shot six times by a police officer.

He also reiterated that "here in the United States of America, police should not be bullying or arresting journalists who are just trying to do their jobs and report to the American people on what they see on the ground", forgetting about his administration's history with James Risen or any number of whistle-blowers, including Edward Snowden. He went on to admonish looters who would use a protest as cover for crime.

It's good that Obama made mention of police disruption of press freedoms. In addition to the backlash against ordering media outlets away from the scene, St. Louis County Police are under scrutiny after riot police used tear gas on an Al Jazeera America camera crew and disassembled their equipment, arrested two journalists at a McDonald's for photographing uniformed police officers and detained a local alderman who had been providing citizen journalism on social media.

But beyond saying "there’s also no excuse for police to use excessive force against peaceful protests", Obama made no mention of the specific police attacks: rubber bullets, gas and LRAD sound devices, as depicted in countless coverage over social media. Contrast that, if you will, to Obama's explicit condemnations of the circumstances around Trayvon Martin's death in Stanford, Florida in 2012, wherein a private citizen who fancied himself a community watch member killed a black teenager without provocation. There is a Blue Wall of Silence separating the tone of the responses.

And as the swell of unrest around Ferguson continues, both in virtual and physical spaces, much of the public is demanding more real action from our elected leaders. A recent petition on WhiteHouse.gov, for example, demands that all police officers be legally required to wear cameras—and because the site guarantees the administration’s response to any action with more than 100,000 signatures, Obama must offer at least some response to the proposed “Mike Brown Law.”

Such a policy has precedent. It's been floated in a few stray departments throughout the country, often with positive effect. For example, in a limited 2012 study in Rialto, California, "the department overall had an 88 percent decline in the number of complaints filed against officers, compared with the 12 months before the study." Publications as disparate as Businessweek and The Atlantic have weighed in favor of such rules. A 2013 study by the ACLU concluded, "Although fitting police forces with cameras will generate an enormous amount of video footage and raises many tricky issues … those cameras will provide an important protection against police abuse."

While it remains to be seen if Obama or other officials are interested in doing anything substantial to alter the different ways we police whites and blacks, perhaps we can build a movement to turn the camera into a spotlight on police behavior—at least as a starting point toward enacting real, structural change.

Dan Staggs is an intern at In These Times.