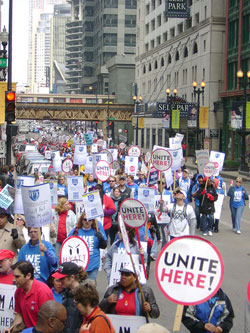 Marchers, including teachers, at the Chicago "We Are One" rally on April 9, 2011.   (Photo by Jean Paul Homes on Flickr.)

Black teachers in Chicago appear to be receiving pink slips at higher rates than white teachers, according to recent analysis by the Chicago Teachers Union.

According to the Illinois State Board of Education’s 2010 report card (PDF), African Americans comprise 29.6 percent of CPS teachers. But the CTU’s analysis of the ISBE’s Teacher Service Record shows African-American teachers account for 43 percent of those laid off.

The layoffs will only add to the city’s dismal numbers on African-American unemployment–at 21.4 percent, the worst for any big city in the country. It also, according to a CTU analysis, disproportionately hurts schools with higher concentrations of African-American and low-income students.

A large loss of teachers of color is particularly hurtful in a city in which 91 percent of public school students are children of color.

CTU president Karen Lewis said in a statement that the layoffs have “real consequences for the overwhelming Black and Latino student population in our schools who look to their teachers as role models for achievement and success. We want to know what CPS is doing to address this racial disparity.” (In a statement, CPS officials said they dispute the union’s numbers.)

The layoffs are painful, especially as they come in the midst of a crushing recession. But they also come at a time when Mayor Emanuel has demanded a longer school day, and says the matter isn’t up for negotiation.

“We’re not going to negotiate or discuss whether children get more instruction — we will work together so that gets done,” he said last month at a South Side charter school. “I’m not deviating from that.”

In pushing the longer school day, the Emanuel’s administration has worked to divide the teachers union, offering bonus pay for teachers (along with an extra $150,000 in discretionary funds for each school) if they agree to waive union contract provisions on school day length and after-school pay individual schools around the city.

Nine schools have agreed to the offer—against the wishes of CTU leadership, who turned down an offer for a two percent raise in exchange for a school day extended by 90 minutes, though union officials have said they are open to the possibility of lengthening the school day.

According to a data analysis by Catalyst Chicago, most of the layoffs corresponded with a drop in enrollment.

[S]chools where 45 percent or more of students are African-American lost 4.7 percent of their students between fall 2009 and fall 2010. Other schools, which experienced half as many teacher layoffs, saw their population decline just 1 percent.

Similarly, schools where at least 87 percent of students receive a free or reduced-price lunch saw a 4.4 percent decrease in their student population. That compares to a 0.5 percentage point increase at other schools – which lost 2.4 percent of their teachers, according to the CTU.

This drop in the number of African-American students corresponds with the city’s larger loss of African Americans: 11 percent of Chicago’s black population has left the city in the last decade, according to available census data.

The layoffs of Chicago’s African-American teachers don’t seem nefarious, and the teacher’s union did not accuse CPS of overtly racist motives in its statement on the firings. One local commentator stated the CTU “play[ed] the race card” in highlighting the numbers–which is only accurate if calling attention to racial inequalities constitutes a playing of the “race card.”

But, as many contemporary observers have noted, the maintenance of racial inequality in the 21st century doesn’t require explicit racism. Racial inequalities can be maintained through seemingly neutral rhetoric and public policy decisions. Chicago has long been one of the country’s most racially stratified cities, with residential segregation regularly ranking among the worst in the country, and disparities between blacks and whites in income, poverty rates, and unemployment are massive.

If any of those figures are ever going to lessen, it will take conscious effort by policymakers to address them–particularly when tough decisions have be made about city finances in light of yawning budget shortfalls. And if African-American teachers in Chicago are going to hang on to any semblance of a middle class life in a city where blacks have always been the first to bear the brunt of economic downturns, a layoff policy that takes both fiscal dictates and realities of racial inequalities into account is desperately needed.