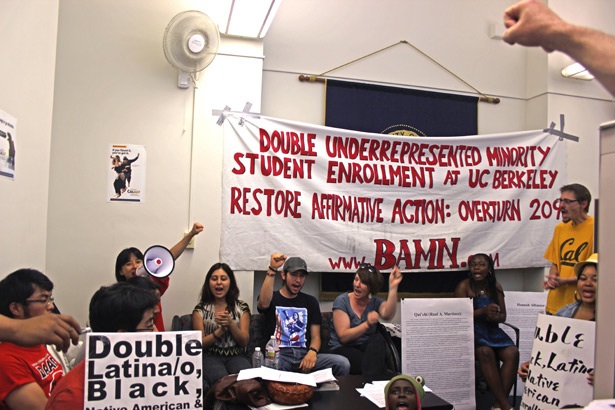 BAMN supporters occupy the UC-Berkeley admissions office to protest the lack of minority representation in the student body.   (Anna Vignet / The Daily Californian)

Secretary of Education Arne Duncan is correct that education reform is the “civil rights struggle of our generation,” Chicago Public Schools teacher Xian Barrett told a packed room of education activists at this year’s Save Our Schools convention in Washington, DC. Those who oppose Duncan’s controversial philosophy of school turnaround and labor restructuring, Barrett says, must actually “take on the struggle that they say they’re taking on.”

What would the more radical counterpart to a Duncan-style “civil rights” movement look like?

One answer might be the Coalition to Defend Affirmative Action, Integration, and Immigrant Rights and Fight for Equality By Any Means Necessary, or BAMN. A student-teacher alliance that operates as a joint caucus within the American Federation of Teachers (AFT) and National Education Association (NEA), BAMN uses litigation and direct action to combat racial inequality throughout the public education system. Its work ranges from organizing against school closings to fighting for greater black and Hispanic representation at public universities.

“Students are the most important force in the defense of public education,” says Yvette Felarca, a middle school teacher at Berkeley Public Schools and the BAMN coordinator for northern California. “Any arena where students have come together and fought is where we’ve seen the strongest and most successful struggles.”

This “students first” philosophy is the linchpin of BAMN’s self-proclaimed “new, militant, mass civil rights movement," which, over two decades, has met resistance from conservatives and teacher unionists alike.

BAMN was founded in California in 1995 in the wake of a decision by the University of California Board of Regents to exclude race as a factor in university admissions. In 1996, California voters passed Proposition 209, which outlawed race-based affirmative action in all public institutions, including universities.

According to BAMN, black and Latino students make up half the state’s high school graduates, but only 22 percent of Californians accepted to Berkeley. In 2010, only four black and four Latino students got into either UC Berkeley or UCLA, California’s flagship universities, from the 37 high schools that make up the Oakland Unified School District.

This spring, 15 BAMN students got into a UC school after participating in a string of occupations at the admissions offices of Berkeley and UCLA. Under the banner of “educate, don’t segregate,” occupiers demanded increased admission of black, Latino and other underrepresented minority students at both schools.

BAMN initially expanded out of California to fight the anti-affirmative-action efforts of former UC Regent Ward Connerly, who was behind the California initiative and has since pushed for similar measures in other states. In 2008, BAMN helped prevent initiatives in Arizona, Missouri and Oklahoma from qualifying for the ballot.

In Michigan, however, BAMN and its allies have had mixed success. In two joint cases in 2003, the U.S. Supreme Court ruled against the University of Michigan’s factoring of race in undergraduate admissions, but upheld a narrower law school policy that considered race. In 2006, voters passed Proposal 2, which struck down all race-based affirmative action in the state. That ballot initiative is pending appeal and won’t be resolved until after the Supreme Court decides Fisher v. University of Texas, a related case with hearings set to begin on October 10. BAMN has filed an amicus brief on behalf of the defendants.

Student leadership in BAMN is not limited to college occupiers. Tabrian Joe, an incoming freshman at Western Michigan University, got his start at age 11 when older students gave a presentation in his classroom in Detroit. Since then, Joe has attended annual Summer Leadership Project gatherings and numerous AFT and NEA conventions.

Detroit lost a quarter of its population over the most recent census period and has endured widespread public service cuts. Through the Michigan Schools of Choice program, surrounding municipalities have been able to take in city students—and extra per-pupil dollars from the state—while siphoning them into separate schools.

BAMN students and teachers have participated in a number of walkouts and direct actions at schools and libraries. In a notable case this April, Occupy Detroit and BAMN rallied to defend the Detroit Day School for the Deaf, which was shut down despite receiving the majority of its funding from the federal government. Last year, the city threatened to close Catherine Ferguson Academy, a school for teens who have or are expecting children. After an occupation with 13 arrests, the school was kept open as a charter with only a handful of its original teachers.

The one teacher who got arrested at the protest, Nicole Conaway, is a BAMN organizer and former chapter leader in the Detroit Federation of Teachers (DFT). “It has been an all-out racist attack,” she says. “Shut down the schools, shut down the libraries, force people out of the city.”

Conaway is critical of DFT leadership for agreeing in 2009 to an unpopular contract—which included steep pay cuts, school-based merit pay, and the institution of “priority schools” staffed by union members under altered work rules—and for its weak stand against school closings and turnarounds.

“We don’t want a seat at the table if we’re on the menu,” she says. “If our students’ lives are destroyed, we can’t participate or cooperate in any way.”

Keith Johnson, DFT president and AFT vice president, argues that the 2009 contract was the best on offer and defends the union’s posture toward closings.

“Do I agree with the number of schools that have been closed? No.” But given the city’s population loss, he says, “I think it’s folly to think that you can maintain every school.”

“I think it’s the reverse,” Conaway rejoins. “School closings are a large part of what is driving down the population of the city, and this is precisely the intention of the closings.”

Though Michigan teachers have no legal right to strike, Detroit has seen two strikes since the state took over city’s school board in 1999. BAMN is calling for another.

“I have no doubt that we’d be very successful,” says Steve Conn, a longtime BAMN organizer who narrowly lost a challenge to Johnson’s presidency last year. “It’s sad because in the run-up to the [November] election we’re most powerful.”

“A strike would give our opposition something to point at to say that this is why we don’t need collective bargaining,” Johnson says. Before Michigan’s Board of State Canvassers struck it from the ballot last week, the union was preparing to campaign for an initiative that would have enshrined public-sector collective bargaining rights in the state constitution.

Incumbent leadership is now focused on repealing Public Act 4, Michigan’s emergency manager law, which gives governor-appointed managers unprecedented authority over fiscally distressed municipalities, including the ability to dissolve collective bargaining agreements. The law went into effect but was later suspended, and will now appear before voters statewide in November. In the wake of its suspension, the union has allied with the school board—represented by a BAMN attorney—in a case against Roy Roberts, the emergency manager of Detroit Public Schools, over the bounds of his jurisdiction.

At this year’s AFT convention, Felarca ran for union president on a slate of some 30 BAMN members from across the country, who denounced the current leadership for collaborating with the Obama administration's education policies. BAMN's criticisms resonated with discontented rank-and-file activists from other caucuses. Both the AFT and the NEA have alienated some members by voting to endorse Obama’s reelection—in the NEA’s case, on early order last year.

Reached over email, an AFT spokesperson said in response to criticism that the union is overly forgiving of the Obama administration: “We are committed to working with anyone who is committed to working with us to advance solutions that help all children succeed—Democrats, Republicans, businesses, parents, and community organizations. … At the same time, we have always been willing to call out what doesn’t work, regardless of party, as we’ve done when we’ve seen education policies that are too focused on testing and measuring instead of teaching and learning.”

BAMN has critics of its own. The group's no-wait, rough-and-ready tactics have rankled craft-oriented teacher unionists, federal officials, and segments of the Left who view its brand of militancy as overly divisive. Several teachers and observers (who agreed to comment on condition of anonymity) cited run-ins with pushy or persistent BAMN organizers, or accuse BAMN of alienating potential supporters by inciting physical confrontation at actions or taking overly uncompromising stances.

“Accusations of violence should be directed against the police or administrators…in instances of confrontation,” Felarca says in response. “We believe every movement has a right to defend itself.”

For Conaway, hesitancy from fellow teachers and activists is just another organizing hurdle.

“When you’re trying to build a movement that [people lack] prior experience with, that can be a challenge,” she says. “People are really, really struggling. It’s a scary thing to talk with people about going on strike.”

BAMN's Jackie Partida, one of the 15 occupiers who won admission to the UCs, adheres to Malcolm X’s famous declaration of urgency from which BAMN gets its name.

“If I do become a professor, I’ll be that professor who’ll be challenging,” she says. “I’m not sure I’ll be able to keep my job. I’ll be taking direct action with my students, because that is how it should be.”