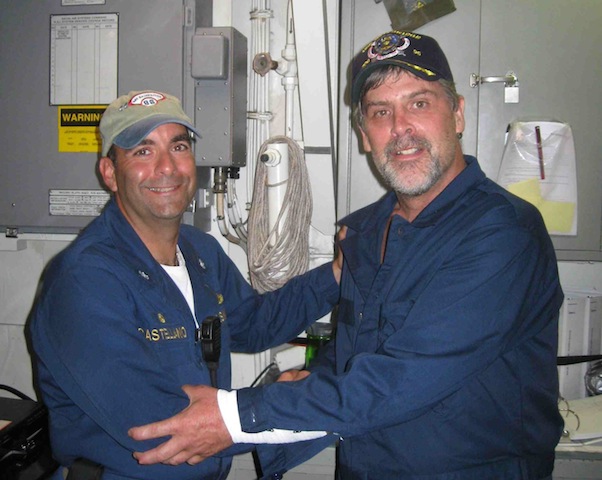 When Somali pirates captured Captain Richard Phillips in 2009, his large Irish-American family gathered at a farmhouse in Vermont to await news of his fate.

At the time, the Maersk Alabama’s skipper was just one AK-47 round away from perishing at sea. But, as he recalls in his 2010 memoir, A Captain’s Duty (co-authored with Stephan Talty), “the Phillips are a wild bunch with our own brand of humor, which not everyone gets … One example: That night, my sisters were joking…about Hollywood making a film about the hostage-taking and began casting all the parts.” According to Phillips, his siblings favored the dashing George Clooney to play the lead role.

Four years after his near-death experience off the coast of Africa, America’s most famous maritime union member has had to settle for Tom Hanks instead. On October 11, Captain Phillips will get his second 15 minutes of international acclaim when Sony Pictures unveils a big-budget film based on his book. In Captain Phillips, it’s a toss-up who should get the hero’s garland—the film’s eponymous captain, his well-trained and fast-acting crew, or the Navy SEALs who rescued Phillips after the pirates took him hostage and tried to escape in a small boat.

Phillips himself has been exceedingly modest about his role in the Maersk Alabama drama. “I do not like the movie named after me, as it makes it out to be just me out there,” he told Destination Vermont, a travel magazine. “There was a ship with 19 crew members that this story is about, not just me … They acted bravely and acted properly … It would be a different story without their actions.”

Indeed, in his book and film-related interviews, the Massachusetts Maritime Academy graduate emphasizes the collective nature of freighter work, both on a day-to-day basis and in moments of danger on the high seas. A Captain’s Duty, provides a vivid account of the teamwork and discipline required to survive at sea, amid the occupational hazards created by hurricanes, shipboard fires, container accidents, collisions, and, yes, armed assaults by would-be hijackers. On the 17,000-ton Maersk Alabama, he notes, “the crew and I were ready for each crisis” because “we’d drilled for exactly those kinds of situations.”

Utilizing similar teamwork, the real-life Phillips and members of his AFL-CIO-affiliated union, the Masters, Mates & Pilots (MM&P), are now rallying against a threat to their livelihood more serious than Somali pirates.  Even before this month’s federal government shutdown, sequester-driven budget cuts were scheduled to reduce funding next year for the Maritime Security Program (MSP). At a cost to taxpayers of $186 million annually, the MSP subsidizes a fleet of 60 commercially owned and operated ships. But a projected budget shortfall, ranging from $25 million to $30 million. in 2014, has led the U.S. Maritime Administration (MARAD) to warn ship owners that one-third of the vessels in this fleet, including the now-famous Maersk Alabama, face elimination from the program.

Without action by a currently deadlocked Congress, these cuts in the MSP “would devastate the pool of trained merchant mariners available for sea-going service and cripple the industrial capacity of the merchant marine,” explains MM&P president Don Marcus. “It’s highly ironic,” he says, “that Captain Phillips and the rest of the crew of Maersk Alabama are being celebrated again for their courage and dedication to duty—while the lifeblood of the U.S. Merchant Marine is under attack.”

As Captain Phillips recounts in his book, civilian sailors—who remain heavily unionized--have a long history of “invisible service” and unarmed valiance, including a casualty rate in World War II that was proportionately greater than any branch of the armed forces. “[W]hen the boys from the cargo ships went home, there were no ticker-tape parades, no G.I. Bill, nothing like that…no one ever remembers us.”

Phillips hopes that the film, based on his life, will lead to greater public understanding of the role played in today’s global supply chain by the 5,700 members of his own union, as well as 50,000 others in the Marine Engineers Beneficial Association and Seafarers International Union. “We are the ones who allow international trade to flourish and grow,” he says. “Through our jobs during peacetime we safely and cheaply carry the world’s goods from manufacturer to consumer and keep the food and products stocked in our stores at home.”

Vessels like the Maersk Alabama are also essential to getting United Nations’ World Food Programme shipments to countries devastated by famine and war. For example, when Phillips’ ship was attacked in 2009, it was carrying five tons of foodstuffs destined for refugees in the Congo and neighboring countries.

As Marcus points out, the Department of Defense and commercial shippers will still need vessels to transport their supplies and products—but the work of U.S.-based union members, like those depicted in Captain Phillips, will be outsourced to foreign-flag ships instead.

Unfortunately, among action film viewers in the U.S., the takeaway from Hollywood’s rendition of A Captain’s Duty may be that making the world safer for Americans, on land and sea, requires an even bigger Pentagon budget. The SEAL team snipers dispatched to kill three of the pirates and save Phillips were part of the U.S. military’s now wide-ranging Joint Special Operations Command (JSOC). As chronicled in Dirty Wars: The World as a Battlefield, by Nation correspondent Jeremy Scahill, the rescue mission was personally overseen by President Obama. According to Scahill, after taking out the pirates, JSOC became the president’s “prized ninjas”

As one of Scahill’s Defense Department sources noted, based on JSOC’s role in Iraq and Afghanistan, it already had “the best technology, the best weapons, the best people—and plenty of money to burn.” In the last week, President Obama has turned these same counter-insurgency “assets” loose again in Somalia and Libya. From a military, foreign policy, and public relations standpoint, the results have been far more mixed than the happy ending to Captain Phillips ordeal. Yet the continuing momentum of U.S. military intervention abroad, in non-war zones, has greatly accelerated since Obama was first elected and the Maersk Alabama situation became an early test of his leadership. Most federal agencies may have been operating with a skeleton crew this month; as of last week, the Navy SEALs and other well-funded foes of “terrorism” were definitely not standing down.

Next year, the United States could avert a major reduction in its merchant marine fleet, and resulting union job losses, for less than the combined price of just two MQ-9 Reaper drones and a single Predator drone. To do that, however, the sequester-driven cuts to federal programs, like the MSP, would have to end and the new budget priorities promoted by U.S. Labor Against the War would have to be embraced by the Obama administration.

Sequester relief has become more unlikely in the wake of the federal  shutdown triggered by right-wing Republicans. As Politico reported on October 3, Congressional Democrats have tried to end the dispute over defunding Obamacare by abandoning their own “budgetary vision” and “calling on the House GOP to pass a ‘clean’ government funding bill…that would fund the government at $986 billion spending levels,” which would preserve the sequester that Democrats previously said they staunchly oppose.

With that bi-partisan solution looming, union president Don Marcus has good reason to be worried about the future of the Maersk Alabama, and other vessels manned by his members. “What the Somali pirates couldn’t take away, Congress could,” he warns.