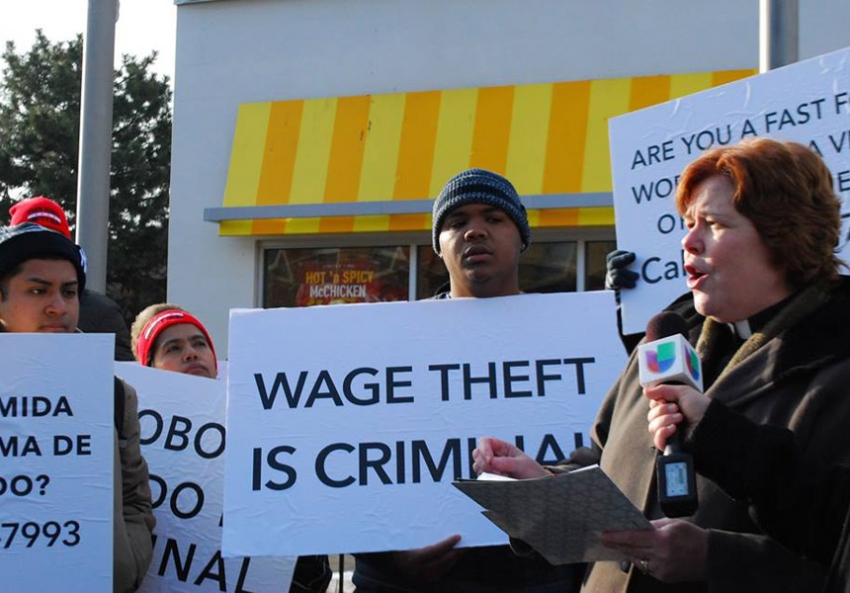 At 8:00 am on Tuesday, dozens of people gathered outside of a McDonald’s restaurant on Chicago’s Northwest side to protest what they say is the company’s widespread practice of stealing wages from workers.

“We have one of the richest corporations in the country [in] one of the richest industries—a $200 billion industry—stealing from low-wage workers who are literally in poverty,” says Deivid Rojas of Fight for 15, who organized the event.

Wage theft refers to any practice—such as paying employees less than the minimum wage or withholding paychecks—that denies workers their full wages as determined by the law or their contracts. Last week, McDonald’s workers announced that they were launching a class action lawsuit against the corporation and its franchises for wage theft. Among other charges, workers from New York allege that their restaurant did not pay them for time spent cleaning uniforms, while workers from Michigan say they were required to work without clocking in. In response to the accusations, McDonald’s posted a statement on its corporate website saying, “McDonald’s restaurants remain open today—and every day—thanks to the teams of dedicated employees serving our customers.”

Chicago's event was part of a national day of action to support the lawsuit and call attention on a broader scale to the company’s allegedly exploitative practices. With the help of SEIU, workers and their supporters staged protests in 33 cities across the country, including San Diego, Boston and St. Louis.

In Chicago, employees, supporters and would-be customers listened to a speech from Rev. C.J. Hawking, executive director of the community resource group Arise Chicago, who decried McDonald’s treatment of employees.

After Hawking spoke, Akilarose Thompson, who has been an employee at McDonald’s for a year, told the crowd about an incident that occurred last summer. At the end of her shift, five dollars were missing from the cash register; she says her manager told her that she was responsible for replacing it before the manager's shift was over. Thompson was afraid she would get fired if she didn’t comply, but didn’t have any money with her. She ended up paying the $2.25 bus fare home so she could get the money, then paying for bus fare back to work, then returning home again.

“I only make $8.38 an hour, so every penny counts. Five dollars for me could be some milk and some bread. It could be a ride to work … It could be something we put aside for my daughter’s college fund. It could be anything. It means more to me than it does to McDonald’s,” says Thompson.

Although the lawsuit does not include any plaintiffs from Chicago, Rojas says Fight for 15 is beginning its own investigation and exploring legal options for workers. Tuesday’s action also included the announcement of a new wage-theft hotline—launched on Tuesday—that Chicago workers can use to share their stories with advocates.

Unfortunately, wage theft is by no means limited to employees of one specific corporation. A 2010 study of workers in Cook County conducted by University of Illinois-Chicago found that nearly half of the workers in their sample had experienced at least one pay-related violation in the past week. The study estimated that these violations amount to more than $1 million in lost wages every day for workers in low-wage industries.

Shelly Ruzicka, director of operations at Arise Chicago, says low-wage industries steal money from their workers so frequently and in so many ways that “wage theft is mainstream.”

To combat this type of mistreatment, workers have taken to the streets en masse. Last year, fast-food workers staged actions against low wages across the country, which culminated in a 100-city walkout—the largest-ever strike of its kind.

Rojas is heartened by the sheer number of workers who have united to create an impact on public opinion—and potentially company policy, given that McDonald’s said earlier this month that it might raise wages. And he doesn’t think the momentum will stop anytime soon. He says that the strikes over the past year, the lawsuit, and the events today “point to the courageous souls of these workers and where they’re willing to go to make sure that justice is done.”

Thompson agrees that McDonald’s workers will keep organizing until all their demands are met. “We’re going to continue fighting … until [the companies] are held accountable and give us the respect and pay we deserve,” she says.