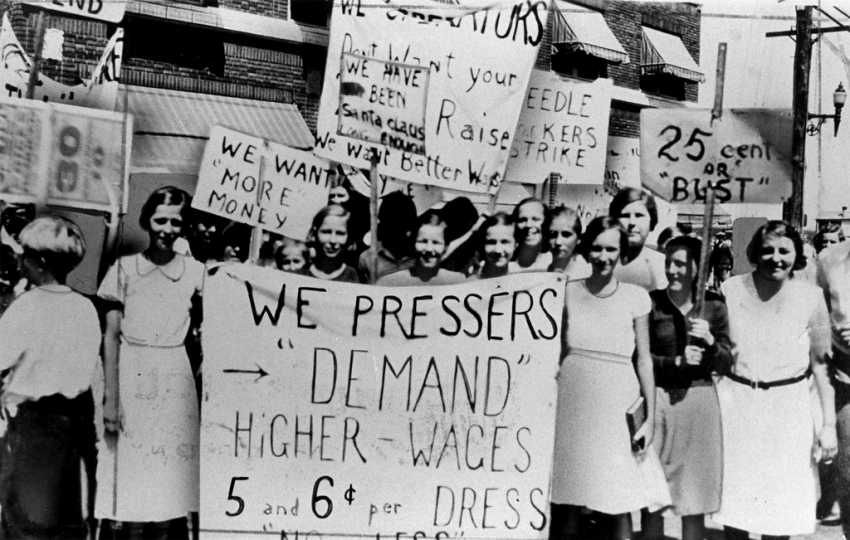 The sword of Damocles hangs over the head of the American labor movement. This spring the U.S. Supreme Court will rule on Friedrichs vs. CTA, a case that could end automatic union membership in all government jobs. If this “right to work” effort goes the way the right wing hopes, it would be followed by an aggressive and well-funded direct mail and robo-call campaign to encourage public sector employees to “give yourself a raise” by dropping their union memberships and ceasing to pay dues or fees.

Misleadingly titled “right to work” laws prohibit unions in the private sector from negotiating fees for the services they are compelled to provide to all workers they represent. They are designed to reduce unions’ income and power. First introduced in 1947, these laws used to be limited to the former slave states of the Confederacy. But in recent years, a coordinated right-wing drive has expanded these laws to a majority of states, including union strongholds like Michigan and Indiana. Thanks in part to such laws, unions today represent only 7 percent of private sector workers. But factoring in the public sector raises total union density to 12 percent. Unions with substantial public sector membership—AFSCME, SEIU, the teachers unions—are the last remaining large, powerful unions in the U.S. Friedrichs is nothing less than an assassination attempt on the union movement.

Opening the doors to the union

Labor lacks a bulletproof vest, but unions are developing contingency plans. We can probably expect to see some unions begin to offer at-large memberships to supporters regardless of profession, employment status or bargaining rights. And why not? According to a recent Gallop poll, 58% of Americans support unions and want to see them strengthened. Research shows that one in three American workers would vote for a union at their workplace if an election were held today.

But a union election won’t be held today at most workplaces. Vicious employer resistance and retaliation, a broken legal process and declining union resources stand in the way of most workplaces winning the majority vote that is required in our all-or-nothing union representation system.

Of course, the workers who want a union want… a union. They want an organization that can help raise their wages and improve their benefits, protect them from arbitrary and capricious firings and gives them voice in how things get done at work. All that a union can provide an at-large member right now is discount AT&T cell phone plans and pet health insurance. At-large memberships are not likely to lead to millions of new union members.

But there might be a couple hundred thousand people willing to pay 10 bucks a month to belong to a movement. Potentially faced with the immediate loss of exactly that many current members, that’s an attractive proposition to unions. The key will be to actually bring a movement into people’s homes, and that means connecting at-large union membership with advocacy and legislative campaigns.

A “right to your job” movement

Opening up the labor movement and pursuing new rights for all workers would help get labor out of the box of thinking mostly about unionized workplaces and appearing to be a special interest. Unions’ recent embrace of ambitious efforts to raise state-level minimum wages to $15 has so far been at the heart of these efforts. Upwards of 24 million working people would receive a raise if the pathetic federal floor of $7.25 an hour was raised to just $10, so the Fight for $15 has a huge built in constituency beyond just fast food workers.

Unions should add to this a state-by-state effort to change the legal standard of employment relations to “just cause.” “Just cause” is the principle that an employee cannot be fired unless it’s for a good reason—basically, that the punishment (losing your livelihood) should fit the crime (stealing, lying, just not being good enough at the job). This often means that an employee has been given some advance notice of her supposed shortcomings and an opportunity to improve and/or be presented with the documentary evidence to back up the employer’s claims of sub-standard performance with an opportunity to contest it.

This is very commonly negotiated into union contracts. Non-union workers generally labor under an “at-will” standard of employment, a holdover from English common law that basically tells a worker, “Congratulations, you are not a slave. That means you are free to quit your job—and your boss is free to fire you.” It’s a kind of liberty, I guess, but not one that’s particularly appealing.

The only job protection that at-will employees currently have is to try to shoehorn their case into one of a handful of legally “protected categories” of workers: be a woman, be a racial minority, be over the age of 42, be disabled, be a whistleblower. And even if a case does fit in one of those categories, a worker can only receive some financial recompense—generally not retaining her job—if she can prove that she was fired because of their protected status. It’s a lousy framework, but the best that an at-will employee has.

Richard Kahlenberg and Moshe Marvit advocate for union activists to be added as a protected class through an amendment to civil rights laws. They do us a favor by getting unions to think outside of the National Labor Relations Act for labor law reform. But their proposal is still too limited. We should not merely be fighting for “special” rights for union activists. As union density has declined, the remaining unionized workplaces come to be seen as islands of relative privilege. Bosses and the media exploit this and try to whip up a degree of working-class support for stripping our last few rights away, seen most clearly seen in the public debate around teacher tenure protections (which is simply the just cause standard by a different name).

Imagine how quickly the debate would change if unions fought for and won meaningful job protections for all workers in a state! Call it a “right to your job” law. Such a law would lay bare just how cynically manipulative and hollow the so-called “Right to Work” laws are.

To be meaningful, such just cause laws would have to include some kind of a court in which to hear cases. This could be as simple as mandating private mediation and arbitration or as complex as creating new state regulatory agencies to hear such cases. If workers did have a court in which they could defend their employment, unions would have something real to offer at-large members as a part of joining the union. And with that offer comes the potential for substantial membership growth.

A radical departure for labor

Attempting to legislate job protections, pay and benefit increases for large groups of workers who probably won’t become dues-paying union members would be a radical departure for the American labor movement. Unions have, for historical reasons, preferred to make their gains in contract bargaining. The early labor movement, in the 19th century, did work to pass laws on wages, hours and factory conditions. They saw most of those laws overturned, as well as many of their strikes and boycotts enjoined, by conservative courts that viewed unions’ efforts as violations of private contracts and disturbances of interstate commerce.

As a result, unions across the political spectrum entered the 20th century with a profound distrust of government and political parties. While labor’s great upsurge of the late 1930’s did bring unions into the political arena, it coincided with the effective end of the New Deal and the inability to expand the welfare system with benefits like national health insurance. Unions turned to their own collective bargaining for employer-sponsored benefits instead of the government. Such efforts were initially a kind of stopgap measure, pursued in the meantime while hoping to eventually secure government-provided benefits. But when the government froze wages during World War II, unions bargained for more and more “fringe benefits” to make up for the loss.

The labor movement that emerged in the post-war era had won a massive private welfare system for its members. Union leaders considered this a “union advantage” that would help “sell” new organizing.  The only major benefit that labor did work to legislate in that era was Medicare and Medicaid (After all, it’s pretty hard to bargain with employers for people who don’t work for them). With one in three workers in a union during the post-war period, even non-union employers had to try to match those benefits to remain competitive. This private welfare system worked for a generation, but it was all too vulnerable when less than one third of workers were organized to defend it.

The labor movements of other countries strike more of a balance between negotiating rights and benefits for their members and legislating them for all workers. This is particularly so in countries where unions formed labor parties or aligned with socialist parties. And when rights are enjoyed by all, they are defended by most. Think of France and the massive protests over austerity proposals to slash pensions and benefits in 1995 and 2010. Would you believe that French union density stands at a mere 7 percent?

Unions tend to think of legislatively gained rights and benefits as easily lost if the wrong governor gets elected or a bad mid-term flips control of a statehouse. We should instead view labor’s legislative agenda as another way of bargaining for the common good. It is a way of broadening our base, opening wide the doors of our movement, to win and protect a standard of living that we all deserve.