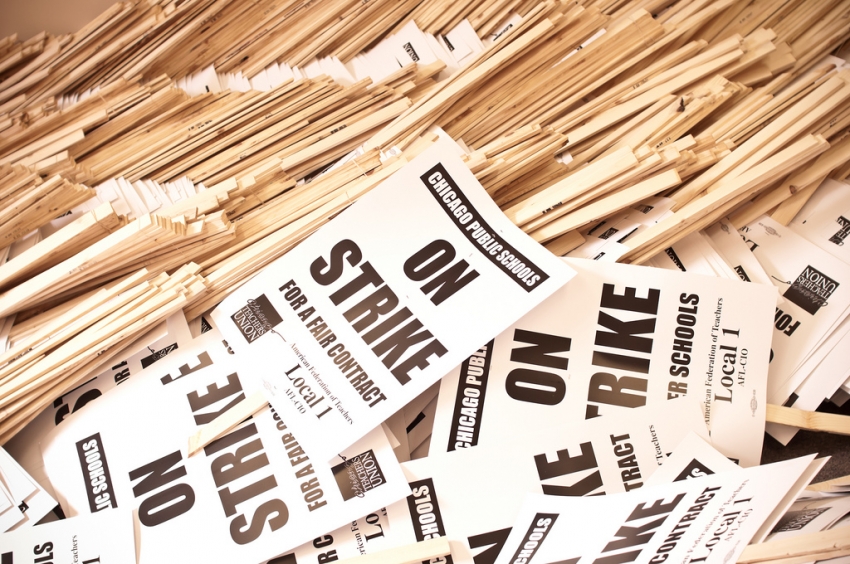 Last week's vote was a testament to CTU's rank-and-file organizing capacities—as well as the harbinger of a likely walkout.   (Sarah-Ji / Love and Struggle Photos)

The numbers are in from the Chicago Teachers Union's strike authorization vote, and it's not even close.

After three days of voting last week, 22,678 of the union's 24,752 eligible members cast ballots, and 96.05 percent of them voted “yes”—88 percent of all CTU members. The nation's third-largest — and arguably most important — teachers union has sent a clear message that they are willing to walk off the job amid their current round of contract negotiations, as they did in 2012.

For the CTU, this contract fight comes in the middle of a rare political crisis for the city’s political elites, yet also will prove a monumentally difficult task. But the strike vote itself (which gives the union leadership the authority to call a walkout if certain legal benchmarks are met during contract negotiations) and the recent history of battles around that ballot are worth recounting — both because a nearly 90 percent “yes” vote reflects the success of a crucial element of the Chicago teachers' model of organizing, and because it's the kind of lopsided result the union’s enemies previously thought was impossible to achieve.

In 2011, neoliberal education reform groups pushed through the Illinois state legislature a bill designed to limit the power of teachers unions, specifically the CTU. Among other limiting provisions (including new rules on teacher tenure, layoffs, evaluations, and other issues), State Bill 7 raised the threshold for authorizing a strike. While the CTU had previously been able to call a walkout with a simple majority of voting members, they now needed support from 75 percent of all members.

How did such a law come about? In a remarkable talk at the Aspen Ideas Festival that year, Jonah Edelman, CEO of Stand for Children, a corporate education reform group that regularly opposes teachers unions and entered the state at the invitation of right-wing billionaire private equity mogul and now–Illinois Governor Bruce Rauner, explained the group's success in passing the bill and the thinking behind it. (Though recorded and posted on the festival's web site, the panel attracted little attention until it was picked up by local education blogger Fred Klonsky.)

As Edelman told it, his group had looked at past data and noticed that the union had never conducted a strike authorization ballot that drew "yes" votes from more than 48.3% of all CTU members. Raising the bar to 75 percent wouldn't make a strike illegal, they reasoned—but it would almost certainly make it unachievable.

"In effect," Edelman says matter-of-factly, "they couldn’t have the ability to strike even though the right was maintained. ... The union cannot strike in Chicago. They will never be able to muster the 75 percent threshold needed to strike."

While it's easy to scoff at Edelman's statement in hindsight, at the time his analysis was spot on. Before 2010, the CTU was completely incapable of organizing even a simple majority of all of its members to vote for a strike, or probably do anything else. (The same is true of the vast majority of unions around the country today and throughout much of American labor history.)

But what Edelman didn’t account for was the program the new CTU leadership, the Caucus of Rank-and-File Educators (CORE), would carry out after being elected in 2010. New, democratic procedures within the union's governing body; intense member political education programs; a new organizing department that took membership engagement seriously—the CTU under CORE came as close to organizing schools top-to-bottom, across the district's six-hundred-plus schools, as was probably possible.

That commitment to rigorously organizing nearly all the union's members—from initial contact to political education to continued engagement around union business to a strike vote—was on display in 2012 when 92 percent of all members voted to strike, and again in the most recent vote when 88 percent did the same. It's also a level of engagement that produces mass numbers of rank-and-file union militants, willing to speak out at public hearings and march in the streets and talk to parents and neighbors—and effect a real political shift at the grassroots level in Chicago.

In some ways, SB7 actually ended up being a gift for the CTU. Unable to call out a strike authorization vote without engaging (and sometimes arguing with and pushing) nearly all of the union's membership, CTU members and staff were forced to carry out the painstaking work of getting the entire rank-and-file on board with its program.

It’s that commitment that sets the Chicago teachers apart from most other unions around the country. CTU leaders like President Karen Lewis have long made headlines for her willingness to, as she has put it, "talk a little smack" in public. (When asked recently about how often she speaks with new CPS CEO Forrest Claypool, who has no background in schools, Lewis told the Chicago Sun-Times, "I don’t have that much to talk to him about 'cause he doesn’t know anything about education.")

The value of such smack talk—at once energizing union members and working-class Chicagoans, and getting inside opponents' heads—is real. Lewis' combination of verbal jabs in the papers and shrewdness at the bargaining table have made her the Muhammad Ali of American union leaders.

In 2012, the CTU strike showed what a critical mass of workers can achieve when they’re united. With nearly nine out of ten members supporting strike action this time around, we’ll likely see that tight organization and militant mobilization in action again in the coming months.