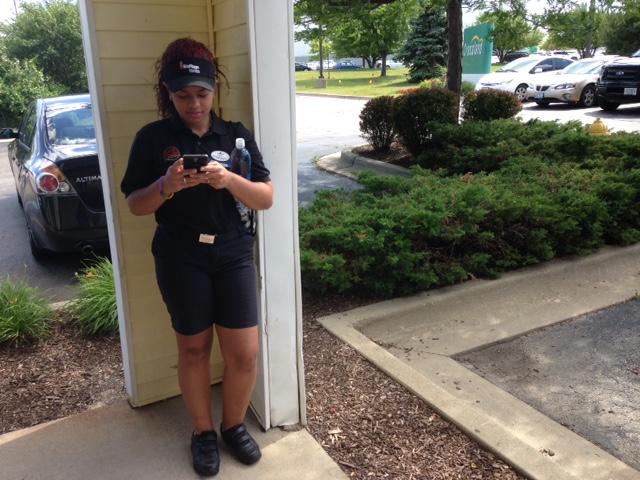 Six Flags Great America recruits foreign students as guest workers by promising a summer abroad to earn money, practice English and make American friends. But for many of these students, the experience feels more like exploitation. (Rebekah Frumkin)

In a cramped hotel room in suburban Chicago, Roxana Cruz, 22, is preparing for another day of work at Six Flags Great America. She worked late the night before—a bus brought her back to the hotel after midnight—and she’s facing another long day now. She straps on a park-issued visor and applies makeup that she hopes aloud won’t melt in the harsh sun.

Cruz shares the studio-sized room with two roommates: a young woman who sleeps on the full bed in the middle of the room and a 21-year-old woman who asked to go by the name Marie, with whom Cruz shares a bunk bed against the wall. Marie is a pseudonym. The young woman, like some other foreign students in this story, asked that her name not be used for fear Six Flags could use her statements against her.

Both Cruz and Marie hail from the Dominican Republic and work as cashiers at restaurants in the park. Marie says her job is extremely taxing because it involves a lot of heavy lifting of boxes and crates.

“To tell the truth, I’m very disenchanted,” she says in Spanish. “I feel like I paid so much money to come here to kill myself physically and go through so much trouble. It’s hard to stay here—very, very hard.”

Cruz and Marie were two of the many foreign workers employed by Six Flags in Gurnee, Illinois, this past summer. “Work-travels” in Six Flags parlance, they are university students between the ages of 18 and 27. They hail from countries like Thailand, Jamaica and China, and travel to Illinois to spend the summer working as water attendants, cashiers and bartenders at the amusement park.

But many work-travel students feel as though Six Flags has exploited them for cheap labor at monotonous jobs rather than delivering the promised cultural and professional exchange.

“They say it’s an intercultural exchange, but in truth, for us students, it’s not,” says Anna, another work-travel student, who spoke under a pseudonym fearing potential backlash from Six Flags. “We come here but we spend money, $3,000, and we come here to make money but with our income in this country we don’t really gain anything, not even from a personal point of view.”

Supporters of the program say that J-1 visa workers are in high demand among companies seeking to fill the kind of tedious, low-paying jobs American high school and college students in search of more resumé-padding work no longer want to fill. And in smaller towns or suburban areas where the mid-teens to late-20s workforce is often away for the summer, companies have come to depend on foreign workers to staff tourist attractions like Six Flags.

Reached by email, a spokeswoman for Six Flags Great America said that the company was proud to hire international students “looking to expand their horizons by working in a new country.”

“These team members represent a small percentage and help supplement our overall employee base,” wrote Tess Claussen, who did not answer more detailed questions about the students and their demographics.

But the visa program has seen its fair share of controversy in recent years. In June 2015, five Irish J-1 students and an Irish-American woman died and seven other were injured when a balcony collapsed in Berkeley, California, where the students were celebrating a friend’s 21st birthday. The balcony was found to be structurally defective, leading to questions about the safety of the lodgings where J-1 students reside, often in numbers exceeding capacity to save on rent.

In August 2011, more than 300 J-1 student workers from China, Turkey, Ukraine and other countries walked out of their jobs at a Hershey plant in Palmyra, Pennsylvania, citing exploitative labor conditions and the false promise of intercultural exchange as the reasons for their protest.

“You can go wherever you want, (but) no Six Flags,” said Cruz. “Six Flags sucks.”

Back home, Cruz is a medical student with ambitions of becoming a neurosurgeon. Here, she said she was paid $8.50 an hour for her first 100 hours of work. Now she earns $9 an hour, but she says that’s still not enough to cover the loan she took out in order to travel to the United States.

“I wanted to come here because [my friend] told me, you’re gonna win a lot of money, you’re gonna get the money for the loan and then you’re gonna earn more money. And now where’s my money?” she asks.

Cruz says that in her interview with Six Flags representatives she was promised she would be able to work overtime, a prospect that, though exhausting, would give her a better chance of paying off her loans. But during her first week of work, work-travel employees were informed that overtime would not be an option. Now, it’s difficult just to work the 40 hours she was promised she’d be able to work a week.

While work-travels can arrange their own accommodation, many opt to stay at Crossland Economy Studios, an unassuming extended-stay hotel with yellow walls and green railings tucked between Interstate 41 and a few scattered office buildings on the edge of Waukegan. A weekly rate of $115 this summer paid for one spot in a three-person studio furnished with a double bed and a bunk bed. Upon signing the contract with Six Flags, students agree to live at Crossland and have the weekly rent deducted from their paychecks.

Cruz and Marie also had to front large amounts of money to spend their summers working in the United States. While the State Department runs the J-1 program on the American end, foreign students apply through sponsor organizations in their home countries. Cruz and Marie paid Summer Labor Interchange, a Dominican nonprofit that matches work-travels with host organizations, roughly $1,700 each to participate in the J-1 program.

In addition to participation costs, the $1,700 covers a Department of Homeland Security fee for students and exchange visitors, but doesn’t include a $180 fee required for the consular interview. Students then have to pay for their flight to the United States and factor in extra money for accommodation and personal expenses before the first paycheck rolls in a couple of weeks into the program.

For food, work-travel students trek or bus the mile or so to a nearby Walmart. Marie says she also shops at Lewis Fresh Market, a store that sells Latin American groceries. Other affordable options like Aldi and Villa’s Grocery are farther away.

Marie hugs her knees to her chest and watches as Cruz applies the finishing touches to her makeup. Last night’s dishes sit in a sink on the other side of the room: pasta from Walmart. Soon a taxi will arrive to take Cruz to work.

To be sure, not all work-travels were disappointed by their time at Six Flags. Gökalp Kocaağalar, 23, from Turkey, worked as a water attendant at Six Flags. For him, Six Flags Great America did not fail to deliver. He describes his time there as “the best summer,” adding that he does not regret his decision and would not hesitate to return to Six Flags if he could.

“I had great friendships and I still talk to them,” Kocaağalar wrote recently. “I missed these days.”

Summer work in the United States is for many work-travel students less a financial necessity than a unique attempt to experience the mythological American dream. Many work-travels are university students with professional ambitions. Some, like Diana Sorohan, said family could help front the cost of travel.

“Here, to go to America, it’s like that thing you have on your life’s list,” Sorohan wrote in an email. “You have to do it, and when you have the chance you just do it, you don’t think twice of it because the chance may be gone in one second.”

Sorohan was a 20-year-old biophysics student when she traveled from her native Romania to Six Flags to work as a water attendant in the summer of 2015. She and her twin sister had always been eager to visit America, and both leapt at the opportunity to become J-1 visa workers abroad.

But the experience was not all Sorohan had hoped it would be, especially when it became clear how hard it would be to pay off the onerous $3,000 loan she’d taken out to come to America. The sisters’ parents lightened the burden by covering $1,000 for each of them, but Sorohan still worried about clearing the $2,000 debt she’d racked up before even beginning her summer of work.

“I knew with the Six Flags payments I would never be able to make the money to pay back the bank,” Sorohan says. “The second job was a lot worse but I always knew how much they pay me and when they pay me.”

To make ends meet, Sorohan took a second job in a factory, where she packed cereal into boxes.

“It was so tiring and sometimes the atmosphere so sad,” she says. “I was just staring at those boxes eight hours long.”

Sorohan returned home with $1,900: not enough to pay back the bank, much less earn a profit from her summer abroad. She didn’t return for a second summer.

Nemo, now 23, did. Speaking under a pseudonym, he says he felt hemmed in last year by Crossland’s many rules and regulations: work-travel students were required to maintain a strict curfew of 10:30 p.m. and even those who could do so legally were not permitted to drink alcohol or smoke cigarettes. This year, Nemo found new lodgings in the hopes of improving his experience. Despite leaving Crossland, Nemo was still dissatisfied with his experience working at Six Flags.

Nemo shook his head as he waited for the bus to pick him up from work.

“We came here to live the American dream, but we don’t,” he said.

This work was funded in part by the Social Justice News Nexus program at Medill at Northwestern University.

Rebekah Frumkin is a writer and reporter living in Chicago. Her work has appeared or is forthcoming in Granta, Pacific Standard and The Best American Nonrequired Reading. Her novel, The Comedown, will be published by Henry Holt in January 2018. Enrica Nicoli-Aldini is a writer and reporter based in Boston. Originally from Italy, she works an as associate editor for the app Google Play Newsstand, managing the editorial curation for Italy, France and Great Britain. She previously reported on politics and social justice based out of Chicago.