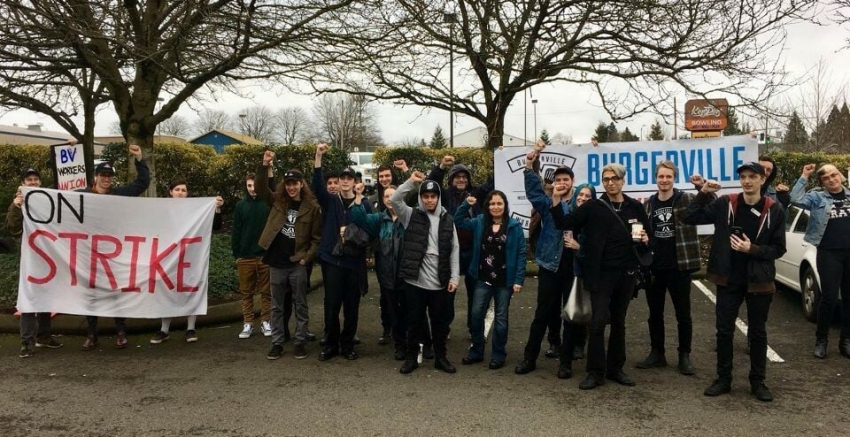 As a crowd of 100 protesters surrounded a Burgerville fast-food restaurant in Portland, Oregon on April 26, management simply watched from a distance as a familiar scene played out. The demonstration marked the two-year anniversary of a Burgerville workers’ unionization campaign across the Portland-Metro region, targeting a company with a reputation for locally sourced ingredients.

The chants of the crowd that had gathered at the 92nd Avenue and Southeast Powell Boulevard location, made up of workers and supporters, had more resonance this time. Employees had just won the first National Labor Relations Board (NLRB) election for a fast-food chain. The 25 workers at this specific location became the first—and only—federally-recognized fast-food union in the country, and they accomplished this feat without paid staff, a massive budget or a neutral workplace.

“The company has done nothing but ignore us publicly and retaliate privately against workers, and after almost two years of waiting we figured that this was the next step we needed to take to bring Burgerville to the table and actually get negotiations moving,” Stefan Stackhouse, an organizing worker at Burgerville, tells In These Times.

The Burgerville Workers Union (BVWU) came out of the increasingly difficult conditions of the fast-food industry and a cultural shift, catalyzed nationally by the Fight for $15, to organizing low-wage, service-sector workers along a common demand. What separated this campaign Fight for $15 campaigns that made headlines in Seattle and New York City was that the Industrial Workers of the World (IWW) was the organization workers organized with, rather than large labor unions like Service Employees International Union (SEIU).

The IWW has more than 100 years of history of radical, anti-capitalist “solidarity unionism,” with members preferring direct-worker action rather than negotiated concessions offered by federal agencies such as Collective Bargaining Agreements (CBAs).

Driven by this organizing philosophy, workers came together to confront the low-wages, bad working conditions, and inconsistent schedules Burgerville locations across Portland were offering.

The BVWU went “public” two years ago, making itself known to management, and demanding a sit-down meeting to negotiate working conditions and wages. This announcement came with a series of public actions with community and labor support, yet Burgerville—which has 42 stores across the Pacific Northwest—refused to take the union seriously, and the BVWU kept organizing shop-to-shop, worker-to-worker. Over the last two years, organizers have issued a series of demands, mobilized public pickets, sent delegations to suppliers Burgerville uses and even implemented a mutual-aid-based benefits program where Burgerville workers provide support to each other such as voluntary childcare.

This campaign grew to include dozens of workers in six public BVWU shops across the city, culminating in a three-day strike in February that brought out the community en masse and saw major unions such as SEIU and CWA join the picket line. This reliance on the strike as an organizing method allowed the union to stand out, and was followed by a worker-led boycott that other unions and community organizations signed on to.

Workers say Burgerville’s response was to increase pressure on their underpaid workforce, firing many of the organizing workers after what they allege are minor infractions. This only galvanized the workers and their community support as the firings made headlines and Unfair Labor Practices were filed.

“I think it would really astound people to realize the work we have done in the BVWU with a budget of $2,000 dollars,” Michelle Ceballos, a worker-organizer who says she was fired after the three-day strike, tells In These Times. “It’s kind of unfathomable the number of folks that put in more than half of [each] week to doing this work unpaid, driven by trust in Burgerville workers and trust in this project and a real belief that workers have to be at the front lines of their own liberation.”

The choice to file for a formal NLRB election came as a surprise to many, as the IWW has a history of avoiding this process: They allege it can often reduce the power of the organizing committee and puts the process in the hands of a federal agency that leans in the favor of management.

As the news of the BVWU’s NLRB victory went public, workers at the nearby Gladstone store announced that they had also filed for an election. With four more stores publicly in play this could lead to a wave that would potentially expanding the bargaining unit.

The BVWU’s victory comes amid a wave of rank-and-file teachers strikes, as well as growing interest in unions among younger generations and the revival of solidarity action from long-standing bargaining units who have had their labor rights chipped away. With a series of Supreme Court cases attacking public sector union rights, challenging to the union’s role as the “exclusive bargaining agent,” and attacking right of collective bargaining, the labor movement is looking towards reinvention to continue mobilizing working-class power.

“This is a scrappy union with no staff, all the committees are worker-led,” says Stackhouse. “We’re not pitching anything to anybody, we’re not going out of our way making wild promises. We are building an organization out of mutual aid and demonstrated action that we can support each other.”

The union election at Burgerville may seem small, but it represents a deeper set of strategies. For many external organizing departments, the card-check itself can be the end of the road, but the BVWU saw the use of an election, and the subsequent contract, as only one strategy among many. In other cases, such as with the IWW-affiliated United Campaign Worker campaigns in 2014, workers chose to forgo the NLRB process and rely on direct action. As labor rights continue to erode, labor concessions are not as viable as they once were. According to the IWW, CBAs, exclusive representation and grievance procedures are all proxies for what gives unions their power: the solidarity between workers.

Shane Burley is a writer and filmmaker based in Portland, Oregon. He is the author of Fascism Today: What It IS and How to End It (AK Press). His work has appeared in Jacobin, Alternet, Political Research Associates, Waging Nonviolence, Labor Notes, ThinkProgress, ROAR Magazine and Upping the Anti. Follow him on Twitter: @shane_burley1.